PSG Star Leaves Lionel Messi Shocked After Bumping Into Him While Asking Neymar for Penalty ▷ SportsBrief.com

Kylian Mbappe’s troubles at Paris Saint-Germain have escalated, with football fans now turning their attention to a clip doing rounds on social media.

In the video, Mbappe is seen pushing his teammate Lionel Messi while going to ask Neymar to allow him to take a penalty.

Exciting feature: Check out news exactly for YOU ➡️ find “Recommended for you” block and enjoy!

PSG won two penalties in their game against Montpellier over the weekend. Mbappe took responsibility for the first one, which he missed. He wanted to make amends by taking the second penalty, which Neymar refused. The Brazilian ended up scoring. 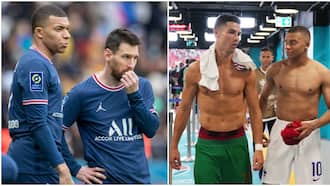 Cristiano Ronaldo or Lionel Messi? Kylian Mbappe makes his pick on who is the best player ever

Apart from that incident, the happenings prior to that has left fans talking. Mbappe appears to shove Messi aside as he makes his way to where Neymar was.

Messi then turns around which a shell-shocked facial expression. The incident has divided fans, with some saying that it was accidental.

Even as a Ronaldo fan, Mbappe doing this annoyed me so much. Bro needs a reality check.

Mbappe’s ego is getting way too annoying. Man pushed Messi, then went to argue for the penalty right after he missed one. Needs to get humbled

Frenkie, meanwhile, was of a different opinion,

Dont be sarcastic He wasn’t aware his body touched someone. Why would Mbappe intentionally push Messi this even isn’t a push… lets be human sometimes there are instances you make contact and dont even realize it because of the moments 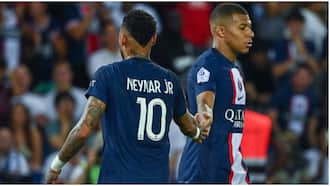 At the same time, Sports Brief has reported that Paris Saint-Germain superstar Kylian Mbappe reportedly wants Neymar sold this summer as the feud between the two has reached a boiling point.

It is believed that the relationship between the two has deteriorated, with the same coming to the fore on Sunday during PSG’s clash with Montpellier at Parc des Princes.

Christophe Galtier’s charges recorded a convincing 5-2 victory during the tie, with Neymar grabbing a brace.