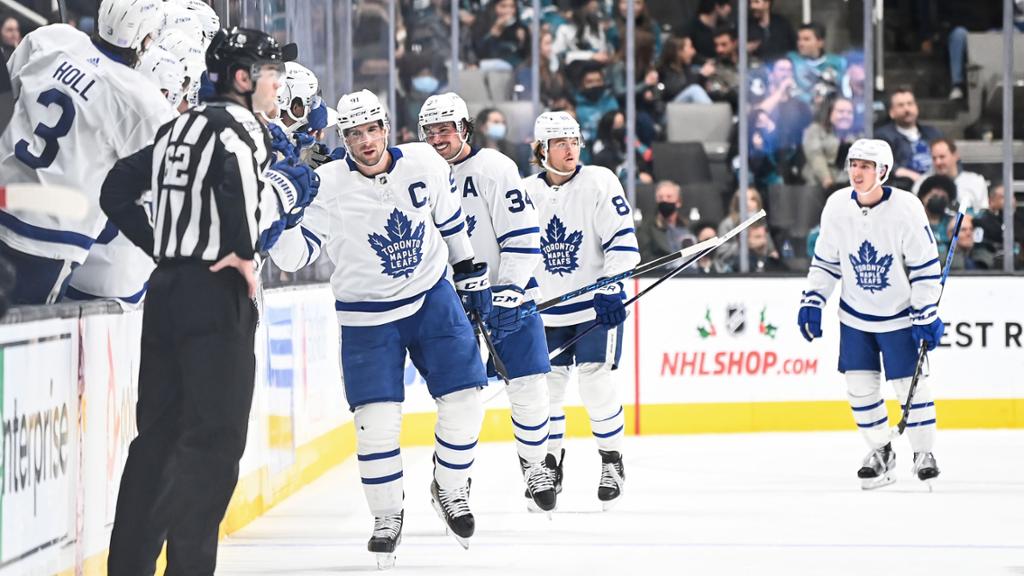 Welcome to the NHL On Tap. Three NHL.com writers will share what they are most looking forward to on the schedule each day. Today, their choices from six games Sunday.

The Toronto Maple Leafs will try to set a franchise record by winning their seventh straight road game when they visit the Anaheim Ducks on Sunday (8 p.m. ET; BSSC, BSSD, TSN4, ESPN+, NHL LIVE). The Maple Leafs (15-6-1) have won three in a row on their current road trip following a 4-1 victory at the San Jose Sharks on Friday, their sixth straight road win after losing their first three games away from Toronto this season. They are 8-1-0 since a 5-1 loss at home to the Los Angeles Kings on Nov. 8. Anaheim (11-7-3) got back on track with a 4-0 win against the Ottawa Senators on Friday after three straight regulation losses. Keep an eye on Ducks forward Trevor Zegras, who has scored nine points (four goals, five assists) in his past six games. — Brian Compton, deputy managing editor

The Chicago Blackhawks (7-11-2) are getting the belief back that they can win, the confidence that they can pull out a game, even if they’re struggling, down a goal or two early, whatever it may be. They’ll try to keep building that confidence when they host the Sharks (7 p.m. ET; NHLN, NBCSCH, NBCSCA, NHL LIVE). The Blackhawks are 6-2-0 under Derek King, who was named coach after Jeremy Colliton was fired Nov. 6. Their 3-2 overtime win against the St. Louis Blues on Friday was a good example of the Blackhawks ability to find different ways to win lately; they trailed the Blues 1-0 just 59 seconds into the game and 2-0 after the first period before rallying. The Blackhawks dug themselves quite a hole with a 1-9-2 start and are seventh in the eight-team Central Division. But they’re finding ways to win now, and there’s a lot of games remaining for them to get back in the division race. The Sharks (10-9-1) are fifth in the eight-team Pacific Division. — Tracey Myers, staff writer

The Washington Capitals visit the Carolina Hurricanes (1 p.m. ET; SN, BSSO, NBCSWA, ESPN+, NHL LIVE), and captain Alex Ovechkin is already putting in his bid to win the Hart Trophy, voted as most valuable player in the NHL, for the fourth time. The 36-year-old forward’s remarkable season and NHL career continued Friday when he scored his first hat trick this season and 28th in the NHL in a 4-3 win against the Florida Panthers. Ovechkin has scored 36 points (18 goals, 18 assists) in 21 games, including 10 points (six goals, four assists) in a four-game point streak, to help the Capitals (13-3-5) go 8-1-1 in their past 10 and tie the Hurricanes (15-3-1) for the Metropolitan Division lead. Ovechkin is 18 goals from passing Jaromir Jagr (766) for third in NHL history and one power-play goal from tying Dave Andreychuk (274) for most. Ovechkin’s 95 points (43 goals, 52 assists) in 81 games against the Hurricanes are his most against any NHL opponent. — Jon Lane, staff writer

Washington forwards Evgeny Kuznetsov (one goal, five assists) and Tom Wilson (three goals, three assists) each has scored six points in a three-game point streak. Carolina can become the ninth NHL team to win 16 games in its first 20 games since 1986-87.

The Lightning and Wild play for the second and final time this season. Tampa Bay won 5-4 at home on Nov. 21 when forward Anthony Cirelli scored two goals. Minnesota has won two straight since that defeat, including 7-1 against the Winnipeg Jets on Friday.

The Sharks, who were 2-2-0 on a four-game homestand that ended with a 4-1 loss to the Toronto Maple Leafs on Friday, start a five-game road trip. Blackhawks forward Brandon Hagel has scored a goal in each of the past three games.

Standalone Call of Duty: Warzone Games May Work Better Than…

Call of Duty Acknowledges Problems With Warzone and Vanguard…

Control is still broken in Call of Duty: Vanguard

Call of Duty: Warzone Players Accuse Bundle Of Being…

Call of Duty Dev Calls out Activision Over Its Vanguard and…