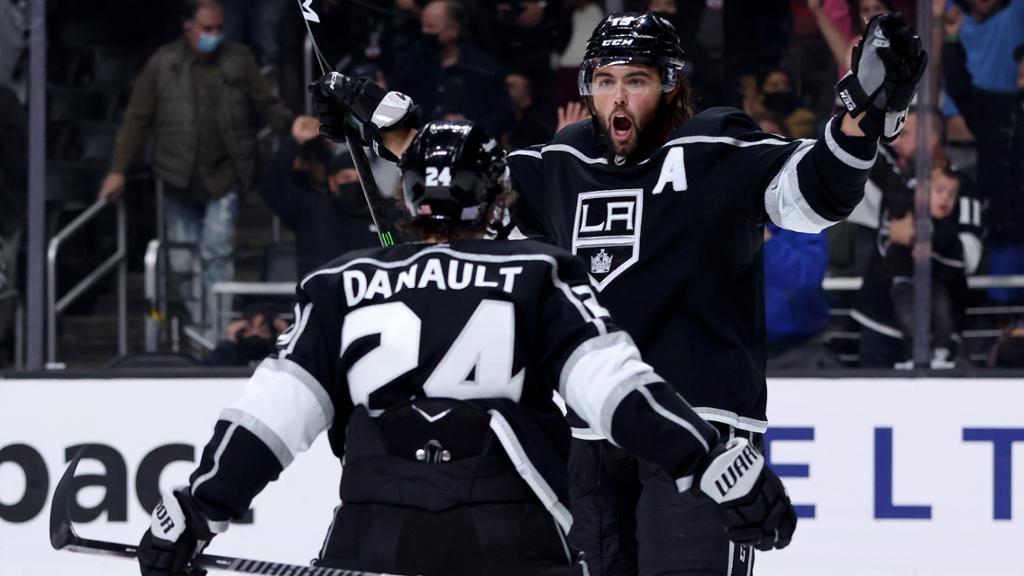 Welcome to the NHL On Tap. Three NHL.com writers will share what they are most looking forward to on the schedule each day. Today, their choices from the three games Wednesday.

The Los Angeles Kings look to push their point streak to nine games when they host the Washington Capitals at Staples Center (10 p.m. ET; BSW, NBCSWA, ESPN+, NHL LIVE). The Kings (8-5-2) are 7-0-1 in their past eight following a 3-2 overtime loss at the Winnipeg Jets on Saturday. Los Angeles begins a seven-game homestand — their first of two this season — attempting to gain in the Pacific Division, where they are tied for fourth place with the Vegas Golden Knights. Capitals forward Alex Ovechkin has scored 12 goals this season, tied with New York Rangers forward Chris Kreider and Winnipeg Jets forward Kyle Connor for second in the NHL behind Edmonton Oilers center Leon Draisaitl (17). Washington (9-2-5) had won four straight before a 3-2 overtime loss at the Anaheim Ducks on Tuesday. — David Satriano, staff writer

The Chicago Blackhawks (4-9-2) seek to win their fourth game in a row with Derek King as coach when they visit the Seattle Kraken (10 p.m. ET; TNT, TVAS, NHL LIVE). The Blackhawks fired coach Jeremy Colliton on Nov. 6 after starting the season 1-9-2 and have allowed one goal in regulation in each of their three victories under King. Forward Patrick Kane has led the way offensively with 11 points (four goals, seven assists) in his past seven games and forward Alex DeBrincat has scored five points (four goals, one assist) in his past five games. The Kraken (4-10-1) are last in the Pacific Division after losing four straight games and six of their past seven. — Mike G. Morreale, staff writer

After three days off, the Colorado Avalanche (6-5-1) begin a two-game road trip at the Vancouver Canucks (9 p.m. ET; SN, ALT, ESPN+, NHL LIVE). The Avalanche have won two straight and are 4-1-1 in their past six during a light stretch in their schedule, having played four games through the first 16 days of November. On the other hand, the Canucks (5-9-2) played seven games through the first 14 days of November, going 2-4-1, and are returning home after three consecutive road losses. Vancouver was outscored outscored 19-6 on its trip, including a 7-1 loss at Colorado on Thursday. — Tim Campbell, staff writer

Avalanche center Nathan MacKinnon will be out about two more weeks with a lower-body injury but center Nazem Kadri has helped fill the scoring gap. Kadri leads Colorado with 14 points (four goals, 10 assists) in 12 games and has 10 points (three goals, seven assists) in a six-game point streak. Canucks defenseman Quinn Hughes is two assists from 100 in his NHL career. He has scored 111 points (13 goals, 98 assists) in 144 games.

The Kraken rank 31st in the NHL with a 3.67 goals-against average and are tied for 19th in goals per game at 2.80. Seattle forward Jordan Eberle has eight points (six goals, two assists) in a five-game point streak.

Ovechkin was held without a point for the third time this season in the loss Tuesday. His four-game point streak (eight points; two goals, six assists) and center Evgeny Kuznetsov‘s four-game point streak (seven points; one goal, six assists) each ended against the Ducks. The game at the Kings is the second of the Capitals’ four-game West Coast trip. Washington plays at the San Jose Sharks on Saturday and at Seattle on Sunday. Kings captain Anze Kopitar leads Los Angeles with eight goals in 15 games this season; he scored 13 goals in 56 games last season.

Agent of Edoardo Bove: “Mourinho is protecting him.”