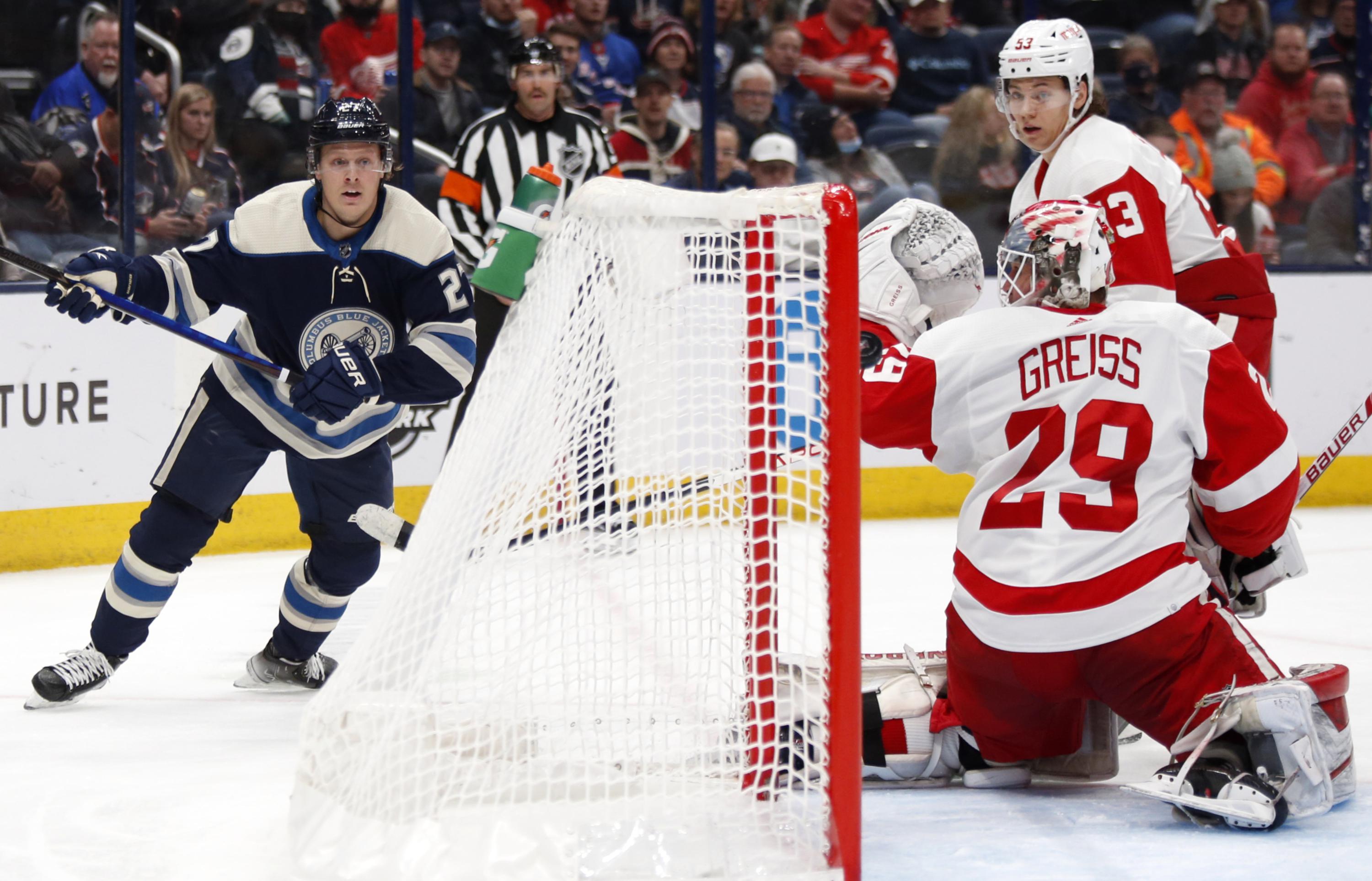 COLUMBUS, Ohio (AP) — Zach Werenski scored the go-ahead goal with 1:19 remaining after Yegor Chinakhov tied it with his first NHL goal, and the Columbus Blue Jackets rallied past the Detroit Red Wings 5-3 on Monday night.

Boone Jenner added a goal and an assist, and Adam Boqvist and Alexandre Texier also scored for Columbus, which stopped a two-game skid.

The Blue Jackets trailed 2-0 in the second period and 3-2 in the third, but Chinakhov pulled Columbus even with 4:18 left. Jakub Voracek’s assist was his team-leading 12th and extended his point streak to six games.

“For us, it’s belief in the room that we are going to find ways to win,” Werenski said. “That’s what we’ve been doing. When they took the lead, nobody panicked. If we stick to our game plan we are going to win.”

Larkin put Detroit on the board first, catching Merzlikins out of position and burying a feed from Lucas Raymond on the stick side at 14:45 of the first. It was his seventh of the season and fourth in as many games.

Rasmussen made it 2-0 early in the second period with his first goal since April 15 off a feed along the left board from Vladislav Namestnikov that slid past a seemingly surprised Merzlikins.

But the Blue Jackets, who came from behind in their last three wins, did it again.

Jenner made it 2-1 when he crashed the crease and tapped in the puck at 13:07 of the second period for his fifth point in the past six games.

Boqvist tied it less than two minutes later, going top shelf over Greiss’ right shoulder with the rebound of a shot by Chinakhov, his first goal since coming to the Blue Jackets from Chicago in an offseason trade.

Boqvist played for the first time since suffering a lower-body injury on Oct. 23.

“In the second period, we were coming,” Blue Jackets coach Brad Larsen said. “We were talking on the bench that there was no point getting frustrated.

“Sometimes it feels like you are going to have to do something different. We threw a lot of pucks and had a lot of real good looks. We got it tied. We’ve had to come from behind a few times. The guys stuck to the game plan. They played a heck of a game.”

Raymond took Tyler Bertuzzi’s pass in front of Merzlikins and buried the puck with 6:29 left to put the Red Wings ahead for the last time.

Werenski’s goal was his third of the season. Texier added an empty-netter with 2.5 seconds remaining.

Thomas Greiss stopped 33 shots for Detroit, which is 4-4 this month.

Justin Danforth, 28, made his NHL debut after being called up from Cleveland of the AHL, where he has two goals and three assists in eight games. Danforth played four seasons at Sacred Heart University, two years split between the AHL and ECHL, two years in Finland and one in Russia. He joins Gregory Hofmann as the second 28-year-old to make his NHL debut this season with Columbus.

Highlights from Hockey Hall of Fame Class of 2020 speeches