Lightning pull away from Islanders, extend point streak to eight 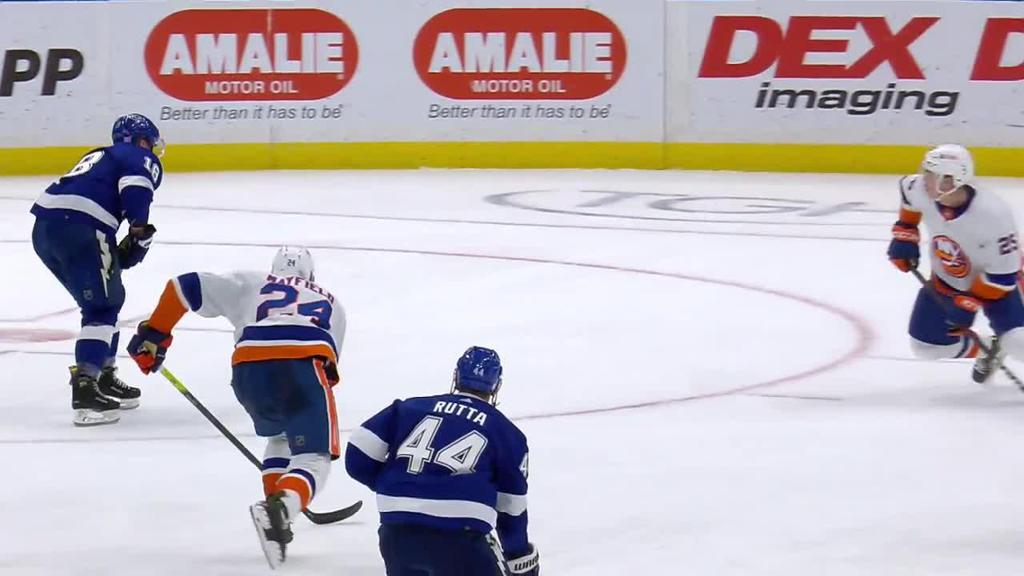 TAMPA — The Tampa Bay Lightning extended their point streak to eight games with a 4-1 win against the New York Islanders at Amalie Arena on Monday.

Brayden Point had a goal and an assist for the Lightning (8-3-3), who are 6-0-2 on their streak. Andrei Vasilevskiy made 25 saves.

The Lightning went 2-0-1 in a three-game home stand against the Carolina Hurricanes, Florida Panthers and Islanders — three teams they beat in the 2021 Stanley Cup Playoffs.

“I think each game was a little bit different,” Lightning defenseman Ryan McDonagh said. “In the end I think we realized against these top teams like this you’ve got to defend. That’s been our recipe the last couple of playoff runs. Keeping the goals against down and trying to stay out of the box. We were probably in the box a little too much tonight. … I think our group has taken a lot of pride in playing well in our own zone.”

Mathew Barzal scored for the Islanders (5-5-2), who have lost three in a row with one game left on a season-opening 13-game road trip. Semyon Varlamov made 24 saves.

“We’re working for those chances and they’re not going in right now,” Islanders forward Anders Lee said. “It’s one of those stretches where that could lead to frustration. I think right now we’ve just got to find a way to stick together, stick to it and eliminate some of the mistakes on the other end.”

Barzal gave the Islanders a 1-0 lead at 2:53 of the first period. Zach Parise took control of a giveaway by Victor Hedman and sent a lead pass to Barzal, who beat Vasilevskiy on a breakaway with the backhand.

Mathieu Joseph tied it 1-1 at 3:16 of the first when he intercepted a pass from Sebastian Aho and beat Varlamov with a wrist shot to the glove side.

“I thought we needed a good shift,” Joseph said. “Pretty good bounce in the middle of the zone. I had some time and space and tried to shoot it. I thought it was good to get that first goal back.”

Anthony Cirelli put the Lightning ahead 2-1 at 19:22 of the first after he took control of a rebound and scored off the far post.

Cirelli provided a spark when he fought New York forward Brock Nelson at 12:56 of the second period after Nelson was called for charging Tampa Bay forward Alex Killorn. Cirelli and Nelson each received a major for fighting, and Cirelli got 10-minute misconduct and two-minute instigator penalties.

“What did he play, like nine minutes?” Lightning coach Jon Cooper said. “And he had the biggest impact in the game in nine minutes. That was a huge goal for us … it wasn’t a power-play goal technically, but he hung in there and made a great play. And then to stick up for a teammate like he did.”

Point extended the lead to 3-1 at 13:28 of the third period after he gathered a loose puck in front of the net and scored from the low slot. Steven Stamkos made it 4-1 with a power-play goal at 15:30 of the period.

“I thought we came out, we got the first goal and we gave it back real quick … way too quick,” Islanders coach Barry Trotz said. “You want to take some momentum … build some momentum, you score and they got it right back.”

“I liked the way we played, I liked how we were aggressive and we were hard on the forecheck and created some opportunities,” Greene said. “We just didn’t get rewarded for some of them.”

NOTES: Cirelli left the game after taking a puck to the face late in the third period. “I can’t sit here and say the mirror is going to be his friend in the next few days,” Cooper said. “But I think he’s going to be OK.” … Barzal has four points (goal, three assists) in his past four games. … Hedman had two assists. … Islanders center Jean-Gabriel Pageau played in his 500th NHL game. … Aho was minus-1 in 23:19 of ice time in his first regular-season game since March 18.

Video: Point has goal, assist in win over Islanders

Highlights from Hockey Hall of Fame Class of 2020 speeches