Hockey Hall of Fame Class of 2022 could include Sedin brothers 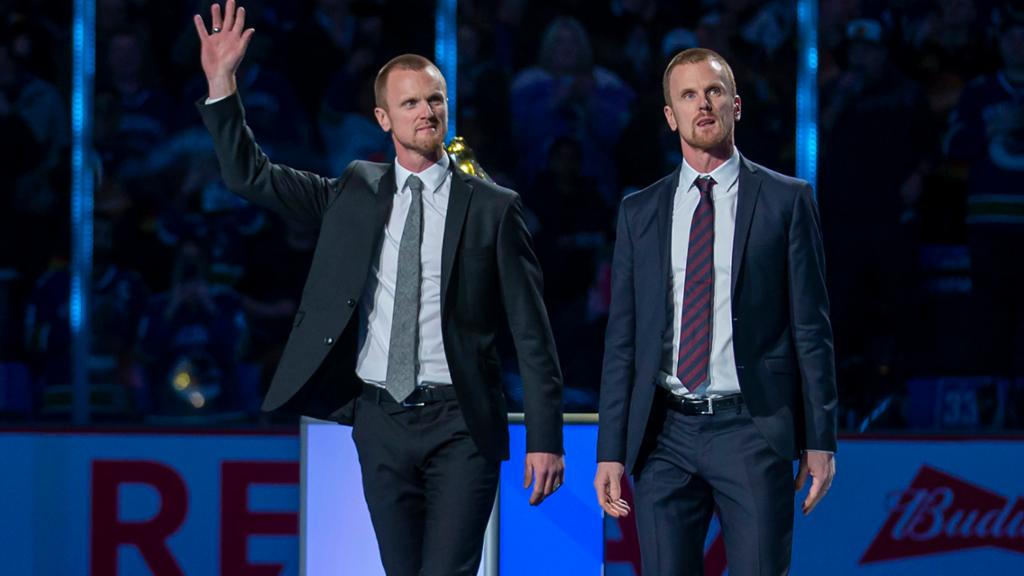 Henrik Sedin, Daniel Sedin and Roberto Luongo helped turn the Vancouver Canucks into one of the top teams in the NHL 10 years ago and each is eligible to be inducted for the first time.

Along with the Sedins and Luongo, the group of first-year eligible candidates includes an International Ice Hockey Federation Triple Gold Club winner from Sweden and two female legends, one American and the other Canadian, who battled on the ice for years.

There are also several worthy candidates who have been eligible in previous years and are hoping to get their Hall of Fame call the way Jarome Iginla, Marian Hossa, Doug Wilson, Kevin Lowe, Kim St-Pierre and Ken Holland did in 2020. All six were inducted Monday.

There was no Class of 2021 because of the coronavirus pandemic.

Here are 15 candidates for the Class of 2022, including six in their first year of eligibility in the player category, which can feature a maximum of four male and two female honorees each year:

Daniel and his twin brother formed one of the best scoring duos in the NHL for nearly two decades with the Canucks after he was the No. 2 pick in the 1999 draft, one spot ahead of Henrik. It would only make sense for them to enter the Hall of Fame together. The forward scored 1,041 points (393 goals, 648 assists) from 2000-18, seventh in the NHL in that span. His 393 goals are first in Canucks history. He is second behind his brother in assists, points, plus-minus (plus-147), games played (1,306) and power-play points (367). He won the Art Ross Trophy and the Ted Lindsay Award as the most outstanding player in the League voted by NHLPA members in 2010-11, when he scored 104 points (41 goals, 63 assists). Daniel also scored 71 points (25 goals, 46 assists) in 102 playoff games.

The former Canucks goalie who started his career with the New York Islanders and finished it with the Florida Panthers retired after the 2018-19 season. When he did, he was third in NHL history with 489 wins (since surpassed by Marc-Andre Fleury). He is second behind Hall of Famer Martin Brodeur in games played by a goalie (1,044), shots against (30,924) and saves (28,409). Luongo is a two-time 40-game winner and played in 70-plus games in four straight seasons from 2003-08. He was a finalist for the Vezina Trophy voted as the top goalie in the NHL three times (2003-04, 2006-07 and 2010-11) and was a Hart Trophy finalist in 2006-07. Luongo’s international accomplishments stand out, too. He is a two-time Olympic gold-medal winner for Canada, as the starter in 2010 in Vancouver and the backup to Carey Price in 2014 in Sochi. He also helped Canada finish first at the IIHF World Championship in 2003 and 2004 and at the 2004 World Cup of Hockey.

Zetterberg won the Conn Smythe Trophy voted as the most valuable player in the playoffs in 2008, when he scored 27 points (13 goals, 14 assists) to help the Detroit Red Wings win the Stanley Cup. The forward scored 24 points (11 goals, 13 assists) in the 2009 playoffs, when the Red Wings fell one victory short of winning consecutive titles. Zetterberg is fifth in Red Wings history in goals (337), assists (623) and points (960), with Hall of Famers Gordie Howe, Steve Yzerman, Alex Delvecchio and Nicklas Lidstrom ahead of him. He is also fifth in Red Wings history in playoff points (120) despite being 10th in games played (137). Zetterberg, who was selected in the seventh round (No. 210) in the 1999 NHL Draft, also won gold with Sweden at the 2006 Torino Olympics. He was a finalist for the Selke Trophy voted as the League’s best defensive forward in 2007-08.

Duggan’s crowning achievement on the ice came at the 2018 PyeongChang Olympics, where she was captain of the United States gold-medal winning women’s team. She also was the captain for teams that won silver at the 2010 Vancouver Olympics and the 2014 Sochi Olympics and helped the United States finish first seven times and second once at the IIHF Women’s World Championship, including as captain in 2015, 2016 and 2017. Duggan played 144 games with the U.S. women’s national team from 2007-18, scoring 78 points (43 goals, 35 assists). Duggan also played six seasons of pro hockey from 2011-17, winning a championship four times. In addition, she was a standout at the University of Wisconsin, helping the Badgers to three NCAA Division I national championships (2007, 2009, 2011) and scoring 238 points (108 goals, 130 assists) in 159 games. She won the Patty Kazmaier Memorial Award as the top player in NCAA Division I women’s hockey in 2011. Off the ice, Duggan was a trailblazer for securing equitable financial and overall support of the women’s national team players from USA Hockey.

Oullette is one of three women players who has won at least four Olympic gold medals, joining Canadian women’s national team teammates Hayley Wickenheiser (five) and Jayna Hefford (four). Wickenheiser and Hefford are each in the Hockey Hall of Fame. Ouellette won gold at the Olympics in 2002, 2006, 2010 and 2014, scoring 26 points (nine goals, 17 assists) in 20 Olympic games. Ouellette also helped Canada finish first six times at the IIHF Women’s World Championship and finished second at the other six tournaments she played in from 1999-2015. She is third all-time in scoring for the Canadian women’s national team with 242 points (87 goals, 155 assists) in 220 games. Wickenheiser and Hefford are first and second, respectively. Ouellette also won the Clarkson Cup playing for the Canadiennes de Montreal in the Canadian Women’s Hockey League four times.

Mikhailov was inducted in the IIHF Hall of Fame in 2000.

Turgeon scored the most points in the NHL of any eligible player not in the Hall of Fame. The center scored 1,327 points (515 goals, 812 assists) in 1,294 games and 97 points (35 goals, 62 assists) in 109 playoff games. Only 32 players have scored more regular-season points in the NHL. Turgeon never won the Stanley Cup and his only major individual award was the Lady Byng Trophy voted for the best combination of skill, sportsmanship and gentlemanly conduct in 1992-93.

Brind’Amour won the Stanley Cup with the Carolina Hurricanes in 2006. Now the Hurricanes coach and Jack Adams Award winner voted as the NHL coach of the year last season, he finished his NHL career with 1,184 points (452 goals, 732 assists) in 1,484 games. Considered one of the best defensive forwards of his generation, he won the Selke Trophy in 2006 and 2007.

Alfredsson scored 1,157 points (444 goals, 713 assists) in 1,246 games during an 18-season NHL career. The forward won a gold medal at the 2006 Torino Olympics and a silver medal at the 2014 Sochi Olympics with Sweden. Alfredsson also won the Calder Trophy voted as the NHL rookie of the year in 1995-96, but never won the Stanley Cup or another major award after that.