The dates for the 2021/22 season have been announced with the season taking a seven-week break to accommodate the 2022 Qatar World Cup.

“The season has been adjusted to accommodate the FIFA World Cup Qatar 2022 which will take place in the middle of the domestic calendar.

“The Premier League season will start on 6 August 2022. Match Round 16 will be the last set of matches played over the weekend of 12-13 November ahead of the call-up period for the tournament beginning on Monday 14 November.

“The League will resume on Boxing Day following the FIFA World Cup Final, which takes place on Sunday 18 December 2022.

“The final match round of the campaign will be played on 28 May 2023, when all games will kick off simultaneously as usual.”

The Fa Cup final will take place the following weekend – on Sunday 4 June 2023. 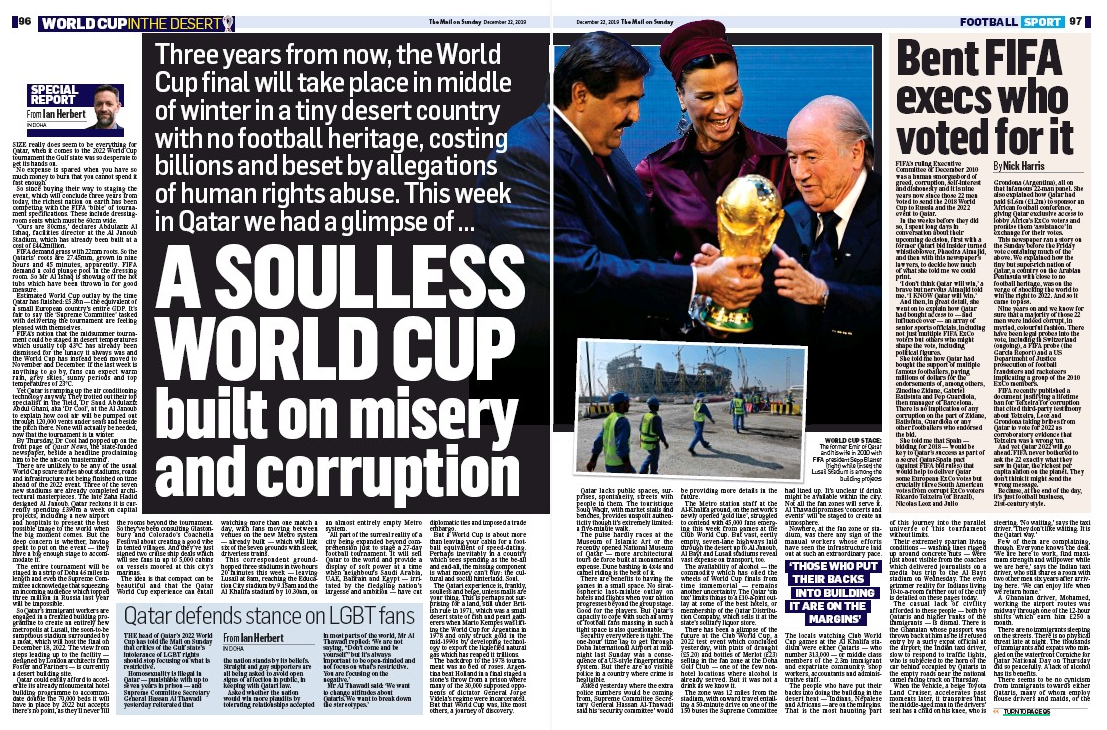 Earlier this year, Martin Odegaard wouldn’t be drawn on whether or not Norway should boycott the 2022 World Cup in Qatar due to human rights abuses but he was clear that they needed to find a way to better influence change.

Speaking in an interview after being named Norway’s new captain at the age of 22, Odegaard was asked about a range of things, including Erling Haaland and Qatar.

There are calls in a number of countries, including Norway, for teams to boycott the World Cup when it arrives in the footballing hotbed of Qatar, due to the human rights abuses and deaths of migrants charged with building the stadiums for the tournament.

“It’s great to have so many in Norway who care about something so important and difficult,” Odegaard said. “I think the best thing now is to discuss how we can better influence change.

“Whether there is a boycott or not, I think it’s important to focus on how we can make changes.

“For my part, it is something that encourages me, it is exciting. I am used to handling the media for a long time.”

A report released in February revealed that at least 6,500 migrant workers have died in preparation for the competition.

The Guardian wrote, “The findings, compiled from government sources, mean an average of 12 migrant workers from these five south Asian nations have died each week since the night in December 2010 when the streets of Doha were filled with ecstatic crowds celebrating Qatar’s victory.

“Data from India, Bangladesh, Nepal and Sri Lanka revealed there were 5,927 deaths of migrant workers in the period 2011–2020. Separately, data from Pakistan’s embassy in Qatar reported a further 824 deaths of Pakistani workers, between 2010 and 2020.

“The total death toll is significantly higher, as these figures do not include deaths from a number of countries which send large numbers of workers to Qatar, including the Philippines and Kenya. Deaths that occurred in the final months of 2020 are also not included.

“A report from Qatar government’s own lawyers in 2014 recommended that it commission a study into the deaths of migrant workers from cardiac arrest, and amend the law to “allow for autopsies … in all cases of unexpected or sudden death”. The government has done neither.

“The Qatar government says that the number of deaths – which it does not dispute – is proportionate to the size of the migrant workforce and that the figures include white-collar workers who have died naturally after living in Qatar for many years. It also says that only 20 per cent of expatriates from the countries in question are employed in construction.

“The mortality rate among these communities is within the expected range for the size and demographics of the population. However, every lost life is a tragedy, and no effort is spared in trying to prevent every death in our country,” the Qatari government said in a statement by a spokesperson.”

In a move that will have implications for world football moving forward, Arsene Wenger has revealed that the Qatar World Cup next year is likely to have automated offside calls.

Arsene Wenger, FIFA’s Chief of Global Football Development, has said that offside calls will likely be automated at next year’s World Cup in Qatar, with the former Arsenal boss stating that VAR calls are currently taking too long.

“We must continue to progress in the speed of decision-making, particularly in terms of offside,’ he said, via Goal.

“In 2022 at the World Cup, we’ll be much better able to make very quick offside decisions. And it will stop the game less because that is what the VAR can be faulted with. There is a real emotional lift, but after that you have to know if you want fair decisions or not.

“There is a good chance that the offside will be automated at the 2022 World Cup. I am bound to secrecy, but this will be the next of the big developments in refereeing.”

The Premier League have made a dog’s dinner of the implementation of VAR, seeming at times to be using it as badly as possibly on purpose, like a spoilt toddler refusing to share his toys. If VAR makes things worse, their logic seemed to go, then people will appreciate us more.

In the end, all PGMOL achieved was to annoy everyone and make themselves a laughing a stock on the world football stage as they highlighted that they couldn’t even watch TV without making a mess of it.

Arsene Wenger was often mocked for many of his ideas when he was at Arsenal, something that hasn’t really changed since he started trying to drag the game into the 21st century.

In the end, however, everyone usually comes around to his way of thinking.