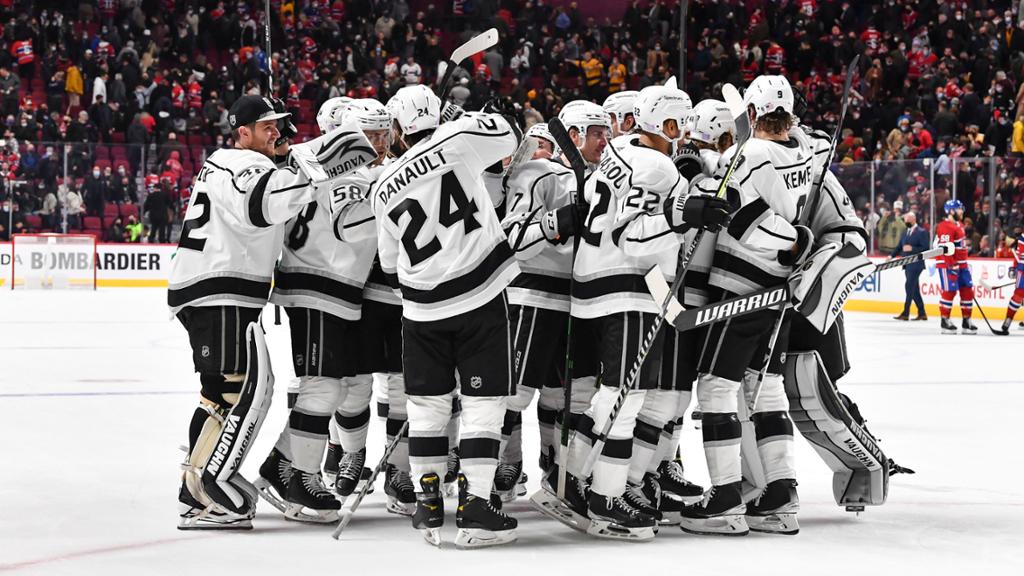 Forward Quinton Byfield is out indefinitely with a fractured ankle, defenseman Drew Doughty is expected to be out six more weeks with a knee injury, and defenseman Sean Walker is out for the season because of a torn ACL and MCL in his right knee. That hasn’t slowed the Los Angeles Kings (7-5-1), who will try for their seventh straight win when they visit the Ottawa Senators (7 p.m. ET; TSN5, RDS2, BSW, ESPN+, NHL LIVE). Anze Kopitar continues to look great, leading Los Angeles in goals (seven), assists (eight) and points (15), and Jonathan Quick is having a resurgent season, going 3-3-1 with a 2.26 goals-against average and .924 save percentage in his first seven starts. The Senators (3-8-1) are 0-4-1 in their past five games — Tracey Myers, staff writer

The New York Islanders (5-3-2) will move closer to the end of their season-opening stretch of 13 consecutive road games when they visit the New Jersey Devils (7 p.m. ET; MSG, MSG+, ESPN+, NHL LIVE). New York will look to rebound from a 5-2 loss at the Minnesota Wild on Sunday that ended its seven-game point streak (5-0-2) while New Jersey (6-3-2) will try to build off a 7-3 victory against the Florida Panthers on Tuesday. The Devils also hope to get back defenseman Dougie Hamilton, who has missed the past three games with a lower-body injury. — Tom Gulitti, staff writer

The Flames begin a season-long seven-game road trip following a 4-1 loss to the San Jose Sharks on Tuesday that ended their 10-game point streak (7-0-3). The Canadiens will conclude a five-game homestand (1-2-1).

Kings forward Alex Iafallo scored a goal in a 3-2 overtime win against the Canadiens on Tuesday to extend his point streak to seven games (five goals, five assists). It’s the second-longest point streak in his career behind a nine-game stretch he had in 2019-20 (four goals, six assists). The Senators will be without forwards Connor Brown, Austin Watson and Dylan Gambrell, defensemen Victor Mete and Nick Holden, and associate coach Jack Capuano because of NHL COVID-19 protocol.

New York center Mathew Barzal, who has scored five points (one goal, four assists) in his past five games, will play his 300th NHL game. The Devils, who are playing the second of a three-game homestand, are 2-0-1 in their past three games.

Florida center Aleksander Barkov has scored nine points (six goals, three assists) in his past seven games, and goalie Sergei Bobrovsky is expected to start after missing the past three games because of an upper-body injury. The Penguins are coming off a 3-2 shootout loss to the Chicago Blackhawks on Tuesday, their third straight game without center Sidney Crosby and coach Mike Sullivan, who are in COVID-19 protocol. Pittsburgh is 1-3-2 in its past six games.

Alex Ovechkin scored his 11th goal of the season in a 5-3 win against the Buffalo Sabres on Monday. It was his 741st goal, tying Brett Hull for fourth place in NHL history and 25 behind Jaromir Jagr (766) for third. The Red Wings have won three straight games and are 4-1-2 at Little Caesars Arena this season, having scored at least three goals in five of those home games.

The Blues return home after completing a four-game road trip (2-1-1) with a 3-2 shootout win at the Winnipeg Jets on Tuesday. St. Louis is 2nd in the NHL on the power play (33.3 percent) and 3rd on the penalty kill (88.9 percent). Matt Duchene has scored six points (four goals, two assists) in his past five games for Nashville, which concludes a six-game road trip (3-1-1).

The Sharks played without seven players who are in COVID-19 protocol on Tuesday but defeated the Flames 4-1 in the opener of a five-game road trip. Jets forward Paul Stastny did not play in the shootout loss to the Blues on Tuesday because of an undisclosed injury.

The Canucks ended a seven-game homestand (2-4-1) with a 3-2 overtime loss to the Anaheim Ducks on Tuesday. Vancouver forward J.T. Miller has scored 15 points (six goals, nine assists) in 13 games this season, and defenseman Quinn Hughes has scored 12 points (two goals, 10 assists) in 12 games. Avalanche defenseman Cale Makar could return to the lineup after missing the past two games with an upper-body injury.

The Golden Knights are 6-2-0 in their past eight games following a 4-2 win against the Seattle Kraken on Tuesday. Forward Jonathan Marchessault has scored six points (four goals, two assists) in a four-game point streak. Minnesota will enter on a four-game winning streak following a 5-2 victory at the Arizona Coyotes on Wednesday.

Troy Terry scored with 1:08 remaining in overtime to give the Ducks a 3-2 win against the Canucks on Tuesday. Terry, who also had an assist, has scored 16 points (nine goals, seven assists) during a 12-game point streak. Anaheim, which has won five straight, will try to hand Seattle its fifth loss in six games.

The Top Early Season Surprises in the NHL

Tottenham striker Harry Kane on Manchester City transfer speculation: ‘I think I dealt with it well’