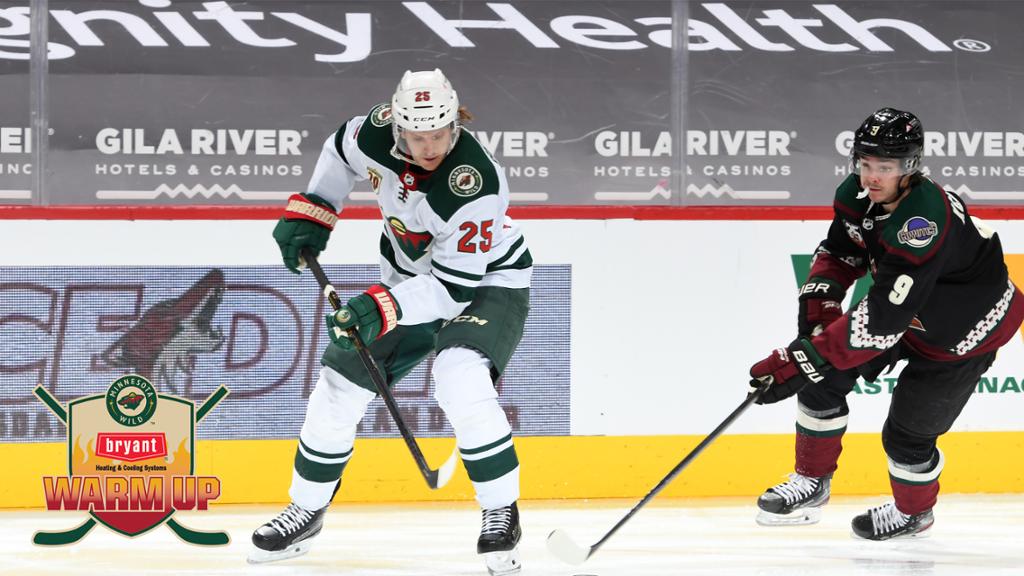 The Wild Warmup is presented by Bryant Heating and Cooling

GLENDALE, Ariz. — The Wild will try and extend its three-game winning streak on Wednesday night when it plays the Arizona Coyotes at Gila River Arena.

Minnesota is coming off a weekend back-to-back against the Pittsburgh Penguins and New York Islanders that featured a pair of third-period comebacks, though Sunday’s 5-2 victory was substantially less dramatic than Saturday’s win in Pittsburgh.

The game Wednesday marks the first meeting of the season between the Wild and Coyotes and the first meeting with the two clubs as Central Division rivals. With the addition of the Seattle Kraken as the NHL’s 32nd team this season, the Coyotes were flipped from the Pacific Division to the Central to create four eight-team divisions.

It is not the first time the clubs have been division foes, however. Both clubs were part of the makeshift West Division last season, where Minnesota secured wins in seven of the eight meetings between the clubs, including each of the past six games.

As the Wild aims to improve on those numbers, it could see a return to the lineup from Jordan Greenway, who has missed the past four games because of a lower-body injury sustained in Seattle on Oct. 28.

“Looked real good, look good the other day during morning skate as well,” Wild coach Dean Evason said of Greenway following practice in St. Paul on Tuesday. “We’ll see how he feels, but he definitely looked good and we’ll evaluate to see if he gets in [on Wednesday].”

The potential return of Greenway follows a win Sunday that saw both Mats Zuccarello and Rem Pitlick return from the COVID-19 protocol list as the Wild inches closer to full health.

Defenseman Alex Goligoski returned from an upper-body injury in Pittsburgh on Saturday night and played well in back-to-back games over the weekend. For Goligoski, a former Coyote, it will be his first trip back to Arizona since signing with the Wild during the offseason.

Whether Greenway returns on Wednesday or at some point later on the current three-game road trip that continues Thursday in Vegas and Saturday in Seattle won’t likely be finalized until after morning skate on Wednesday.

If he does, the Wild’s lineup will resemble its Opening Night group.

“It’s a nice decision to have, is to try and figure out where he’s going to fit in,” Evason said. “[But] when guys are playing well, it’s tough to break up lines.”

Minnesota will start Kaapo Kahkonen in goal on Wednesday. Kahkonen made 19 saves on 21 shots in the win over the Islanders on Sunday.

Arizona hasn’t played since a 5-4 win over the Kraken on Saturday night in Glendale. The victory marked the first of the season for the Coyotes after an 0-10-1 start to the campaign.

Seattle scored twice in the first 59 seconds of the game and led 3-1 after 20 minutes, but saw the Coyotes rally for one goal in the second before taking the lead at 13:34 of the third period on a power-play goal by Phil Kessel.

After the Kraken tied the game with 1:18 left in regulation, Lawson Crouse scored the game-winning goal 13 seconds later in a thrilling victory.

Goaltender Scott Wedgewood made 27 saves on 29 shots in relief of Karel Vejmelka, who was pulled after allowing the first two shots he faced to go into the net in the opening minute.

Defenseman Shayne Gostisbehere, acquired in the offseason from Philadelphia, leads the club with nine points in 12 games. Crouse has a team-high four goals.

Wedgewood, claimed off waivers earlier this month, became the fifth goaltender since 2009-10 to earn a victory in a game for the Coyotes in a game he did not start.