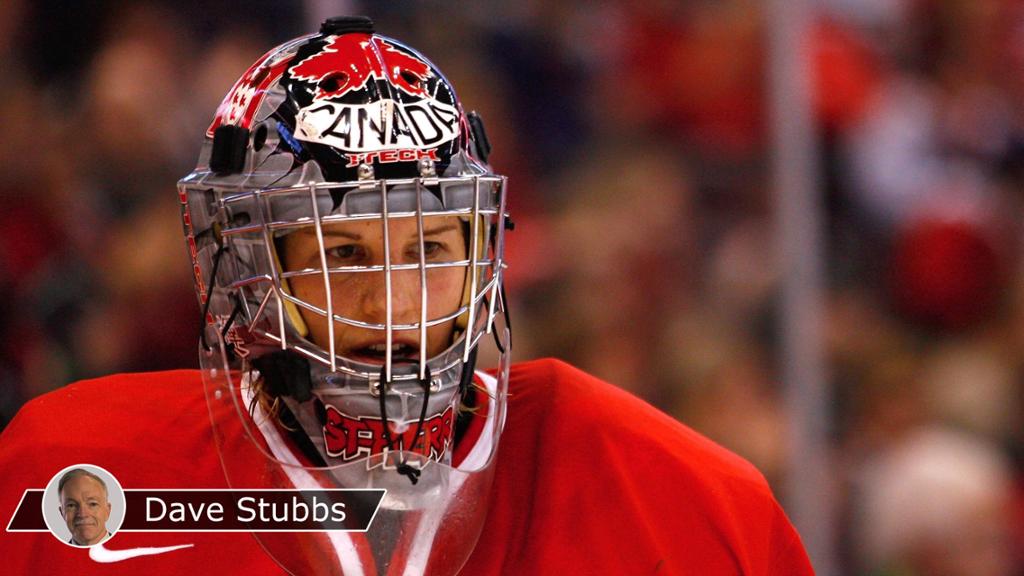 But that day will come Monday, 15 years after Roy’s induction, when St-Pierre will be enshrined as a member of the class of 2020.

Because of the coronavirus pandemic, St-Pierre has had to wait almost 17 months for her enshrinement, not the traditional five, since she received the call from Hall of Fame chairman Lanny McDonald in June 2020.

“I’ve just been able to celebrate for a longer period,” St-Pierre said, laughing. “I think that, before, maybe I couldn’t really believe that this was happening.”

St-Pierre will be joined this weekend by 30 or so family members and close friends from throughout her life, the guest list headed by her husband, Lenny Jo Goudreau, their sons, Liam and Ayden, her parents, Andre and Louise, and her brothers, Yan and Karl.

“I don’t know what to expect,” St-Pierre said of the festivities in Toronto. “They tell me it’s a big weekend, but I’ve never been to an induction. I haven’t been to the Hall of Fame since 2001 or 2002. I’m looking forward to showing my sons around.”

Kim St-Pierre with her husband, Lenny Jo Goudreau, and their sons Liam, 9, and Ayden, 7, in October 2021, and in action at the 2011 IIHF Women’s World Championship in Switzerland.

St-Pierre is the eighth woman to be elected to the Hall of Fame, and the first goalie. It’s fitting, given that she’s been a pioneer in the game since she began playing at the age of 8 in her native Saint-Jean-sur-Richelieu, about 25 miles south of Montreal, where her first decade was spent on boys’ teams when opportunities for girls were almost nonexistent.

St-Pierre would go on to become a three-time Olympic gold medalist for Canada and play in nine IIHF Women’s World Championships, winning the tournament five times and finishing second four times. In 13 years with the national team, she had a 1.17 goals-against average and .939 save percentage.

She also had a brilliant collegiate career for McGill University in Montreal while earning a degree in kinesiology. Almost singlehandedly, St-Pierre turned the McGill women’s program around during her time from 1998-2004, skipping the 2001-02 season to play for the Olympic team. She also played briefly with the McGill men’s team as a senior in 2003-04.

Twice a Clarkson Cup champion with the Montreal Stars of the defunct Canadian Women’s Hockey League, St-Pierre even faced shots from the Montreal Canadiens during a practice in October 2008, filling in for Carey Price, who was out with the flu, with Jaroslav Halak in the other net.

Guy Carbonneau, who coached the Canadiens from 2006-09, was among those impressed.

“She was great,” Carbonneau said. “I thought she hung in there pretty well. I don’t think anybody put less velocity on their shots. They tested her and she stood in there. It was good to see.”

St-Pierre has been voted most valuable player, best goalie and an all-star at almost every level from her first days wearing pads. And soon, her plaque will be displayed in the Hall of Fame’s Esso Great Hall, with those of so many other hockey legends.

St-Pierre and Roy have more in common than merely a display space beneath the historic room’s stained glass dome, said Caroline Ouellette, a former teammate and one of St-Pierre’s best friends.

Famously, Roy once told his Canadiens teammates to score a single goal and he’d get them the victory. Ouellette, a four-time Olympic champion who won gold with St-Pierre in 2002, 2006 and 2010, remembers her friend taking that page from the four-time Stanley Cup champion’s book.

“Kim told us that all she needed was one goal,” Ouellette said. “It might have been a joke, but she’d back up her words.

“One thing that really separated Kim from her competition was her ability to kind of flirt with the line between cockiness and confidence. If you played for her, you felt so confident that she was going to make every save. And if you played against her, she made every save look easy.

“She reminded me of Patrick Roy in many ways where she would add a little mustard here and there. That gives you the freedom and the confidence to go on offense and push to score because you know she’s going to be stellar back there.”

As does any trailblazer, St-Pierre didn’t skate an easy path. Moving with her family to Chateauguay, about 15 miles from Montreal, when she was 10 years old, St-Pierre dealt with the criticisms of parents who said that she was stealing a boy’s place on the teams for which she played, as well the taunts of opponents.

“They didn’t want to lose to a girl,” she said. “I never took it personally.”

Kim St-Pierre takes a victory lap with the Canadian flag after the country’s gold-medal victory at the 2006 Turin Olympics.

St-Pierre never saw herself as a pioneer, though, just an enthusiastic goalie with a thirst for playing the highest caliber of hockey no matter the gender of her teammates.

She came from strong sporting stock. Her father, Andre, was a Central Hockey League defenseman who was selected by the New York Rangers in the fourth round (No. 53) of the 1970 NHL Amateur Draft, though he never played an NHL game. St-Pierre’s mother, Louise, was a physical education teacher and triathlete.

Hockey was just one part of St-Pierre’s young life. She was an excellent gymnast, figure skater, swimmer, soccer, tennis and softball player, good enough at each that she likely could have been an elite athlete in any of them. But goaltending pulled strongest and her devotion to it was without compromise.

She started in hockey to spend time with her brothers on the family’s backyard rink, and as she developed in goal, her father took up goaltending and worked hours with her as a coach.

“He was always really, really calm, as was my mom,” St-Pierre said. “I’m sure they were stressed watching me play, but I never saw that. They always made it fun for me and made sure I enjoyed my experience. The Chateauguay board was great to me and my teammates protected me like they were my brothers, making me feel that I belonged.”

Kim St-Pierre in 2009 with the Montreal Stars of the Canadian Women’s Hockey League.

St-Pierre faced plenty of adversity, including being cut four times trying out for Quebec’s provincial women’s team. By age 18, she figured her career was done until she was invited to join the McGill University women’s program by then-general manager Dan Madden.

Speaking virtually no English and knowing no one at the school, she was a hard sell. But St-Pierre came around and would become a superstar for her team, setting 60 records and being voted MVP four times. She would also meet her future husband at McGill and her best friend, Amey Doyle, was her goaltending partner.

As a result of her success at McGill, St-Pierre quickly caught the eye of Canada women’s team coach Daniele Sauvageau, and her career soared in international arenas.

St-Pierre’s first gold medal at the 2002 Salt Lake City Olympics was probably her crowning achievement. Canada had lost eight consecutive games to the heavily favored United States, and during the gold-medal game, Canada was assessed 13 penalties.

“Kim was our rock,” Ouellette said. “She just had an intimidating presence. You knew it was going to be so hard to score, and I think the Americans felt this. It played in their heads because she was a wall.

“Kim was certainly an outstanding goalie, the best that I played with, but she’s an even better person. If you ask anyone who knows her, it’s probably her kindness and her awareness of others that is going to be mentioned first.

“She was loved by every single teammate she ever had, and that’s really rare. She has a personality that is just so caring and so generous with others. I’d seen her leave the net with her team ahead and let her backup go in so they might share a shutout.”

St-Pierre remains a role model for young girls and boys. It’s something she embraces by volunteering much of her time in Quebec, where she watched stars like France St. Louis, Danielle Goyette and Therese Brisson blaze a trail before her.

She remembers being inspired, too, by Manon Rheaume, who won two world championships as goalie for Canada and played in preseason games for the Tampa Bay Lightning in 1992 and 1993.

Full time, St-Pierre is manager of business development for BOKS Canada, a charity organization fueled by volunteers and corporate sponsors that works with schools nationwide to develop programs to promote physical activity for children.

She’s also working on RDS television with Sauvageau, the former coach who believed in her and welcomed her to the national team, appearing once a week on a hockey magazine show with more opportunities to come.

If her focus on the Hall of Fame is finally coming into sharper focus, St-Pierre is reflecting on what she’s learned about herself on this remarkable road to enshrinement, the value of being a good teammate in and beyond hockey a cornerstone of her life.

“I think confidence is huge,” she said. “If you don’t have confidence in yourself, it’s really hard to get it from coaches or your teammates. It really has to start from within.

“Hockey, and life, are all about preparation and confidence. If you’re not prepared to go on the ice, if you’ve not worked hard in the gym and are mentally ready, game ready, then you’re not prepared. That’s something I’m carrying into my workplace, too. If you have a meeting or a conference and you haven’t done the work, everything is stressful, and your confidence is not there. Those are huge things I learned from hockey.”

True to form, St-Pierre was deep in preparation two weeks before her induction, writing her six-minute speech.

“It all seems very real, so very exciting,” she said. “I can’t wait to be there.”