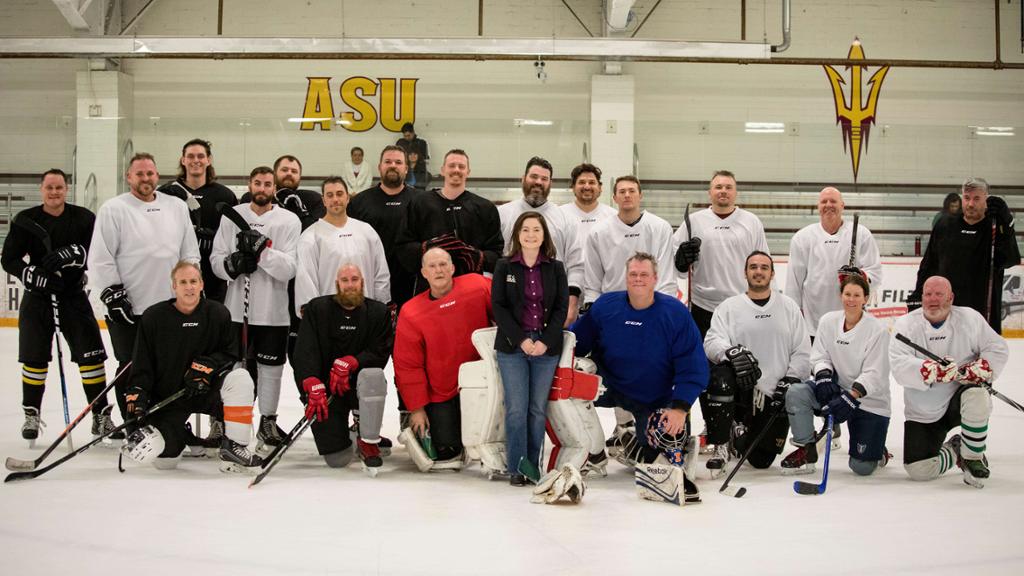 Knowing that he was only allowed, per family rules, to play one sport each year, Colin Morrison went to his parents with a question when he was 11: Did that mean one sport, or one season? One sport, he was told. So Morrison, who had heard that roller hockey was played all year long, opted for the chance to extend his athletic exploits.

He would play every season until he left for the Marine Corps after high school graduation.

“I definitely found that loophole,” he said. “And look where we are today, so it worked out.”

Today, having eventually switched from roller hockey to ice, Morrison has established the newest team in the Warrior Hockey program, in Arizona. Warrior Hockey, under the auspices of USA Hockey, is dedicated to injured and disabled U.S. military veterans, a way for them to find the camaraderie and support they experienced in their military units and a therapeutic tool for their mental health.

And on Oct. 31, Morrison learned that Navy Federal Credit Union would be donating $30,000 on behalf of NHL Veterans Appreciation Night, which features a game between the Arizona Coyotes and Minnesota Wild at Gila River Arena on Wednesday (10 p.m. ET; TNT, NHL LIVE).

The contribution will, as Morrison emphasized, guarantee weekly ice for the Arizona Warrior Hockey team for at least two years.

“When we heard how much it was going to be, I was blown away,” he said. “It’s literally a life-changing amount of money for the veterans in our program.”

Their first two skates were donated by their home rink, Oceanside Arena in Tempe. Beyond that, Morrison said, they didn’t know how consistently they would be able to get ice, given the cost.

“Colin has pretty much done this on his own,” said Mike Vaccaro, the Warrior Hockey Discipline Representative on USA Hockey’s Disabled Hockey Section and a Warrior Hockey participant himself. “A lot of the other programs usually have two or three people. Colin seems to be doing this on his own. He’s really stepped up. His heart is in the right place. He wants to help.

“He loves hockey. So this is helping Colin. But he’s helping other veterans.”

Most of the veterans in the Warrior program have “invisible wounds,” as Vaccaro said. Players have to meet certain qualifications; they must be or have been veterans and members of the Armed Forces and meet a minimum disability rating, have a Purple Heart, a VA rating of 10 percent or greater, have been medically discharged, have post-service disabilities that are related to disabilities occurring in service or have a disability that did not occur in service, but which meets discharge eligibility.

There are 38 teams, and Vaccaro is hoping to expand by another by the end of the year. There will be a new one in Las Vegas, one is starting in Anaheim and one should be coming in Seattle now that the Seattle Kraken are playing.

“It’s veterans helping veterans get through their emotions,” Vaccaro said. “The suicide rate for veterans is really high. So now Arizona’s got a team set up, so hopefully when those guys feel bad, they go on the ice and they can get through to their next day or their next week, whatever it takes.”

Morrison joined the Marine Corps on the Delayed Entry Program in 2000, before the start of his senior year of high school. He was at boot camp on Sept. 11, 2001, before deploying to Iraq in 2003, going back in 2004 and was honorably discharged in 2005.

He had grown up on the Central Coast of California and made the trek to the Great Western Forum during 1991-92, the 25th anniversary season for the Los Angeles Kings, starting his love of hockey. But it wasn’t until three years ago, not long after he finally took to the ice, that Morrison got involved with the Warrior Hockey program after learning there weren’t any programs out west.

Morrison set out to change that. It wasn’t easy.

Morrison picked up momentum regarding the program in 2019 after helping to represent Las Vegas at the third Warrior Classic, an event started in 2017 that brings together Warrior teams from around the country.

“We came back and that’s when I really started to put the pedal to the floor and started doing everything I could to get us started,” Morrison said. “Two months later, COVID hit.”

They got their 501(c)(3) status in May and applied to the Amateur Hockey Association to be recognized by USA Hockey. It was a unanimous vote. Their numbers have skyrocketed. From 26 skaters, the total has jumped to 44, and Morrison expects that to continue to increase, given the population of veterans in Arizona. Maricopa County, where Phoenix is located, had 253,833 veterans as of 2019, according to United States census data.

But it’s not just about the hockey.

“The nonprofit side of what we do is providing the veterans the resources on what benefits are out there, what the eligibility requirements are and how to apply for them,” Morrison said.

The Coyotes have been supportive. The team was invited to participate in the Coyotes’ Military Appreciation Night on Nov. 6 against the Seattle Kraken and has been invited by former Coyotes player and current chief hockey development officer Shane Doan to engage in further discussions about the program, including about starting a Learn to Skate/Learn to Play program for veterans in conjunction with the Coyotes.

The hope is that will engage veterans who don’t already play the sport, growing the program and hockey in Arizona at the same time. And maybe that will spawn Warrior Hockey programs in Tucson and Flagstaff, beyond its current home in Phoenix.

“What I’ve seen is that every skate we’ve had everybody’s out there, smiles ear to ear, laughing and having a good time,” Morrison said. “So regardless of what’s going on in our lives, that hour that we’re on the ice, that’s all gone. We all have our stresses or what life is, and most of these veterans have the additional stresses of dealing with their disabilities.

“And giving them the opportunity where they can have the camaraderie that most of us lose when we get out of the service and then even though they have what some may consider a limitation due to their disability, they’re able to go out and participate and they’re not treated any differently. It’s something that is inclusive and adds a benefit to their lives.”