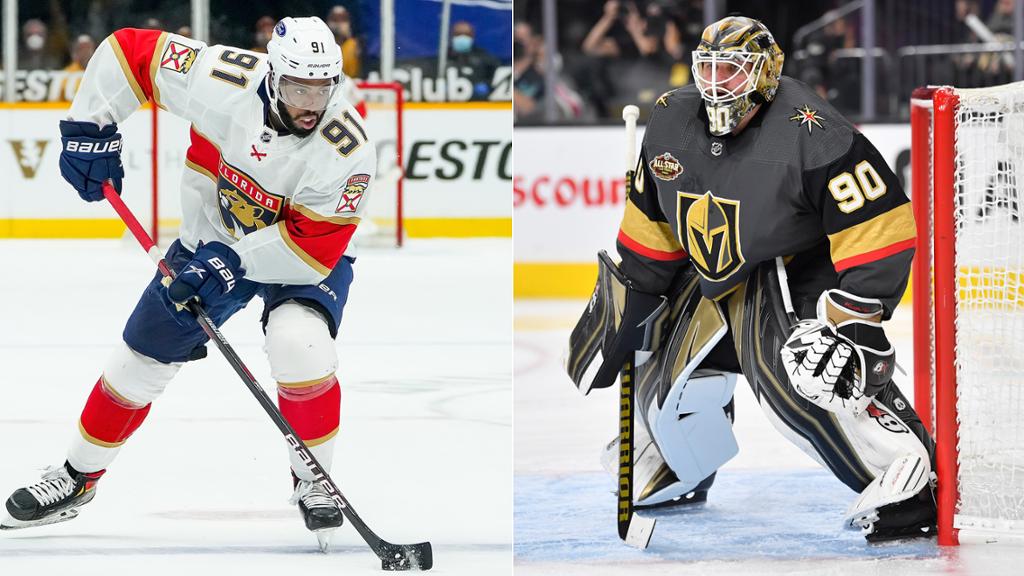 There is no shortage of great players taking the ice during the two NHL games broadcast exclusively Tuesday on ESPN+ and HULU in the United States and NHL Live in Canada.

We asked five NHL.com writers for their opinion on which player they will be most focused on while watching the two games.

Here are their answers (listed alphabetically):

I only got to cover Duclair for a short time when he was with the Chicago Blackhawks, and personally it makes me happy to see him find a place where he’s latched on and made a big impact. After playing for five teams in his first six NHL seasons, he joined the Panthers last season and signed a three-year contract to stay in Florida on July 15. This season Duclair has scored 12 points (eight goals, four assists), tied for second on the Panthers with Jonathan Huberdeau (three goals, nine assists), one point behind Aleksander Barkov. The 26-year-old is dynamic and one of the big reasons the Panthers have one regulation loss in their first 12 games (10-1-1). — Tracey Myers, staff writer

Video: Panthers at Devils on ESPN+ | Tonight at 7pm ET

I like that Tracey went with the Panthers, but I’m going with Huberdeau instead of Duclair. Huberdeau finally is getting his due as one of the best playmakers in the NHL, and he’s one of the driving forces on the Panthers. He’s tied with defenseman Gustav Forsling for the Florida lead with nine assists and two of his three goals have been game-winners. Since his breakout 92-point season in 2018-19, Huberdeau has averaged 1.12, 1.13, 1.11, and this season 1.00 points per game. I’m just glad to have more excuses to watch the Panthers this season, and by extension Huberdeau. — Amalie Benjamin, staff writer

Although the Golden Knights (6-6-0) have struggled to find consistency while dealing with injuries to important players early in the season, Lehner has been solid in taking over as Vegas’ clear No. 1 goalie after Marc-Andre Fleury was traded to the Chicago Blackhawks on July 27. Lehner is 5-5-0 with a 2.79 goals-against average and .919 save percentage in starting 10 of Vegas’ 12 games. He was at his best in a 5-2 victory against the Montreal Canadiens on Saturday, keeping the Golden Knights within 2-0 behind after they were outshot 20-1 in the first period and finishing with 36 saves. Lehner made 28 saves in a 4-3 victory against Seattle in the first game of season for each team, in Las Vegas on Oct. 12. — Tom Gulitti, staff writer

Sidney Crosby called it. At the NHL/NHLPA Player Media Tour in September, the Pittsburgh Penguins captain was asked what the Kraken were getting in Tanev, the forward they selected from the Penguins in the 2021 NHL Expansion Draft. “I think ‘Tans’ is going to be a fan favorite there,” Crosby said. “He brings it every night.” Crosby talked about Tanev’s speed, grit and energy. “And on top of that, he can score,” he said. Yep. Fans wear Tanev’s No. 13 jersey to Climate Pledge Arena and imitate his bug-eyed headshot on the “Tanev Cam.” Tanev has helped form the Kraken’s identity with his relentless style. And on top of that, he has scored; he’s tied with Jordan Eberle for the Seattle lead with six goals in 12 games. — Nicholas J. Cotsonika, columnist

It’s hard to believe Zacha, now in his seventh season, is one of the Devils’ veteran players. The journey hasn’t been easy, but he has rounded out his two-way game while finding his niche utilizing one of his most valuable assets, his wrist shot. “It’s a shot not many guys can pull off but ‘Pav,'” coach Lindy Ruff said earlier this month. Zacha had NHL career-high totals in goals (17) and points (35) in 50 games last season and this season leads New Jersey in goals (five) and is tied with Andreas Johnsson for the lead in points (seven) in 10 games while averaging 18:43 in ice time playing either left wing or center in a top-six role. Zacha has gained the confidence of the coaching staff and has been able to deliver. — Mike G. Morreale, staff writer

Quiz: Cyber attacks are on the rise: Is your business ready?