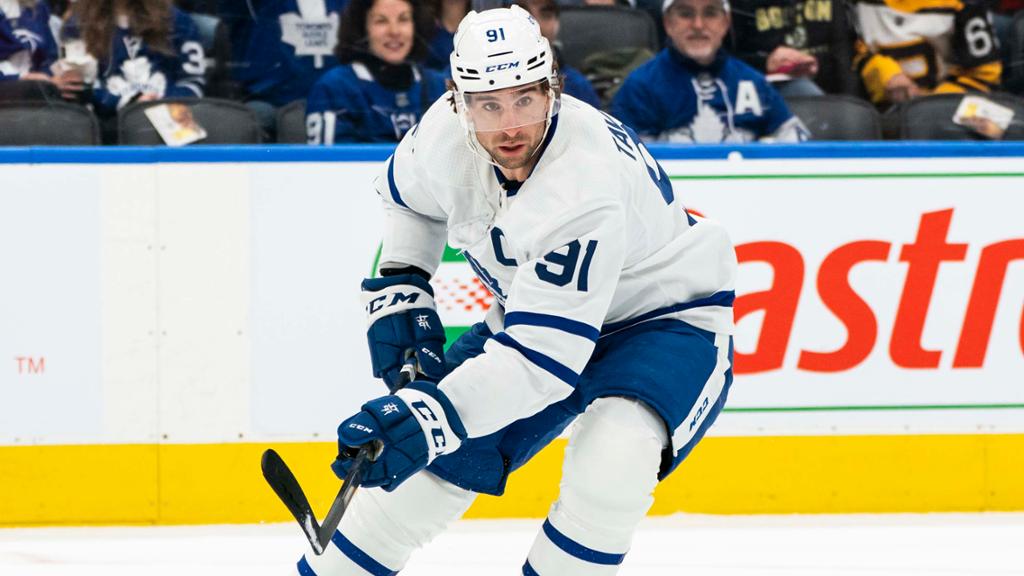 John Tavares will be a game-time decision for the Maple Leafs against the Philadelphia Flyers at Wells Fargo Center on Wednesday (7:30 p.m. ET; NHLN, SN, TVAS, NBCSP, NHL LIVE).

The Maple Leafs captain sustained an undisclosed injury in a 5-1 loss to the Los Angeles Kings on Monday.

Forward Ondrej Kase also sustained an undisclosed injury Monday and will be a game-time decision as well.

“Both are day to day,” Maple Leafs coach Sheldon Keefe said Tuesday. “They’re going to travel with us and come to Philadelphia which obviously is a positive sign they could play, but I expect for both of them, a [game-time decision] would be the case.”

Forwards Joey Anderson and Kirill Semyonov were recalled from Toronto of the American Hockey League and practiced Tuesday.

Kevin Hayes could make his season debut when the Flyers play the Calgary Flames on Oct. 16, coach Alain Vigneault said.

The forward has been working his way back from Sept. 21 abdominal surgery. He was expected to need 6-8 weeks to recover.

Hayes is eligible to be activated from long-term injured reserve but won’t play against the Maple Leafs on Wednesday, or at the Carolina Hurricanes on Friday and at the Dallas Stars on Saturday.

“He’s been fully cleared to practice and contact, hasn’t been cleared medically yet,” Vigneault said. “We’re at the six- or seven-week period so I’m assuming he would be cleared shortly.”

Defenseman Ryan Ellis, who has been out the past seven games because of a lower-body injury, practiced Tuesday and could play against the Toronto Maple Leafs. — Adam Kimelman

Mark Stone joined the Golden Knights for their morning skate but the forward remains out with a lower-body injury and will not play against the Seattle Kraken (10 p.m. ET; ESPN+, HULU, NHL LIVE).

Stone skated but did not take part in line rushes. It’s the first time he’s practiced since getting injured Oct. 14 against the Los Angeles Kings. He skated on his own and took part in individual drills Oct. 29 at City National Arena, the Golden Knights’ practice facility.

“It’s a great sign,” coach Peter DeBoer said. “We’re still not close to [him] playing yet, but it’s a great first step.”

“The finish line is still a ways out, but it’s a boost for us,” DeBoer said. “Coming off the road with some of the things we’ve dealt with, [it’s good] just to see some of these guys around and looking better than when we left 10 days ago, two weeks ago.” — Danny Webster

Forwards Filip Forsberg and Nick Cousins each were placed on injured reserve Tuesday.

Forsberg has been out the past three games because of an upper-body injury sustained during the third period of a 3-2 overtime win at the Calgary Flames on Nov. 2. He is considered week to week.

Cousins did not play in the third period of a 2-1 overtime loss to the Chicago Blackhawks on Sunday because of an upper-body injury and is considered week to week.

Forwards Michael McCarron and Mathieu Olivier were recalled from Milwaukee of the American hockey League.

Defenseman Victor Mete has been placed in NHL COVID-19 protocol.

He is the fifth Senators player placed in protocol, along with forwards Connor Brown, Dylan Gambrell and Austin Watson, and defenseman Nick Holden. Associate coach Jack Capuano also is in protocol.

The Senators recalled goalie Filip Gustavsson from Belleville of the American Hockey League and he will be available to play at the Boston Bruins on Tuesday (7 p.m. ET; NESN, TSN5, RDS2, ESPN+, NHL LIVE). Goalie Anton Forsberg will not play because of a non-COVID illness.

MacKenzie Entwistle is expected to be out 4-6 weeks because of an injury to his left ankle, sustained during a 2-1 overtime win against the Predators on Sunday. The forward was placed on long-term injured reserve Tuesday.

Entwistle has scored three points (two goals, one assist) in 12 games this season.

“You finally get your chance, and he’s worked hard to get to this level, for something like that to happen, it’s kind of a step back for him,” Blackhawks coach Derek King said. “I feel for him, but injuries like that, they take a little bit. But when he comes back, hopefully he’s stronger and ready to go and he’ll take off running again.”

The Blackhawks recalled forward Reese Johnson from Rockford of the American Hockey League on Monday, and he could play against the Pittsburgh Penguins on Tuesday (8:30 p.m. ET; TVAS, NBCSCH, ATTSN-PT, ESPN+, NHL LIVE). — Tracey Myers

“So Far AC Milan Have Shown More Than Inter Have”