Vanguard’ review – the battle of the bulge


Call of Duty: Vanguard is self-aware enough to reference the infamous “press F to pay respects” meme, but it fails to understand what it is that it was mocking in the first place. The meme spawned from a scene in 2014’s Call of Duty: Advanced Warfare, in which you attend a memorial service. While standing over the grave of a dead soldier, the game freezes until you press the ‘F’ key to pay your respects to the fallen. It’s supposed to be profound but instead, it highlights the series’ shallow interactivity.

In Vanguard, there’s a section where you’re tasked with clearing a courtyard so your allies can advance. I’m gunning them down for 15 minutes and they just keep coming. As soon as one dies, they’re immediately replaced by a new soldier who runs in from off-screen. The new soldier then stands in the exact same position as their fallen comrade, and I line up the shot, hold my breath, and squeeze the trigger. F. In runs a new guy, and I repeat the process – as the new body drops, the old one fades out of existence. F.

It turns out that I need to shoot a specific enemy in a window opposite to make the scene move along. As soon as I shoot the sniper, I’m allowed to progress. For all its graphical fidelity, Vanguard can’t help but remind you that you’re playing a game. You can see the mechanisms working behind the scenes in almost every confrontation.

At one point, you’re taking part in the Battle of Midway as an ace fighter pilot. But even in the wide-open skies, you feel completely boxed in. Pull off an evasive maneuver and you might find yourself at the edge of the playable boundary. “Turn back, you are leaving the mission area,” the game screams before fading to black and plonking you back at the last checkpoint. RIP, Wade Jackson – like Icarus, he was killed by his own ambition. F. 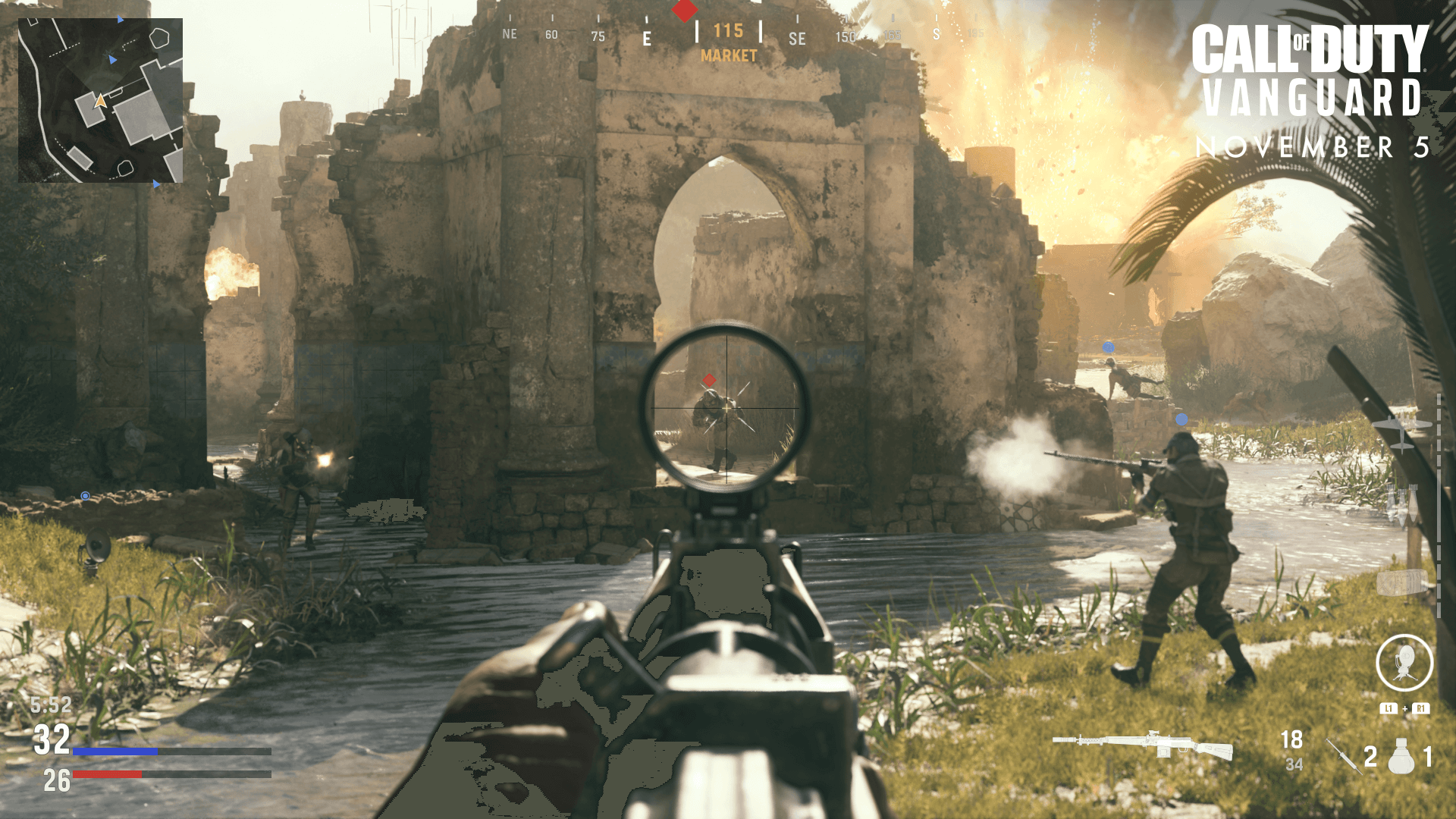 Unlike Call of Duty: WWII, Vanguard doesn’t just rehash moments we’ve seen before. In fact, it does a pretty good job of showing us a new perspective on WWII. You take control of a team of superhero soldiers from different Allied countries – an American pilot, a Russian sniper, an Australian demolitions expert, and a British paratrooper – who make up an Inglourious Basterds-esque team of highly skilled misfits. They’re captured and interrogated by a Nazi officer, and the story plays out through the mind games of the interrogation room, occasionally flipping back to deliver a playable backstory for each of them.

One highlight sees you caught in the middle of the bombing of Stalingrad. It’s sudden, violent, and awe-inspiring. You see and explore the Russian city pre-bombing, and make your way back through it as the bombs fall and buildings collapse around you. But it’s the only moment from the entire campaign that will stick with me in the coming months. Despite avoiding rehashing the D-Day landings and other moments we’ve played multiple times before, it still feels inescapably familiar. Lavish, high-fidelity cutscenes and strong acting from a brilliant cast can’t mask over it. 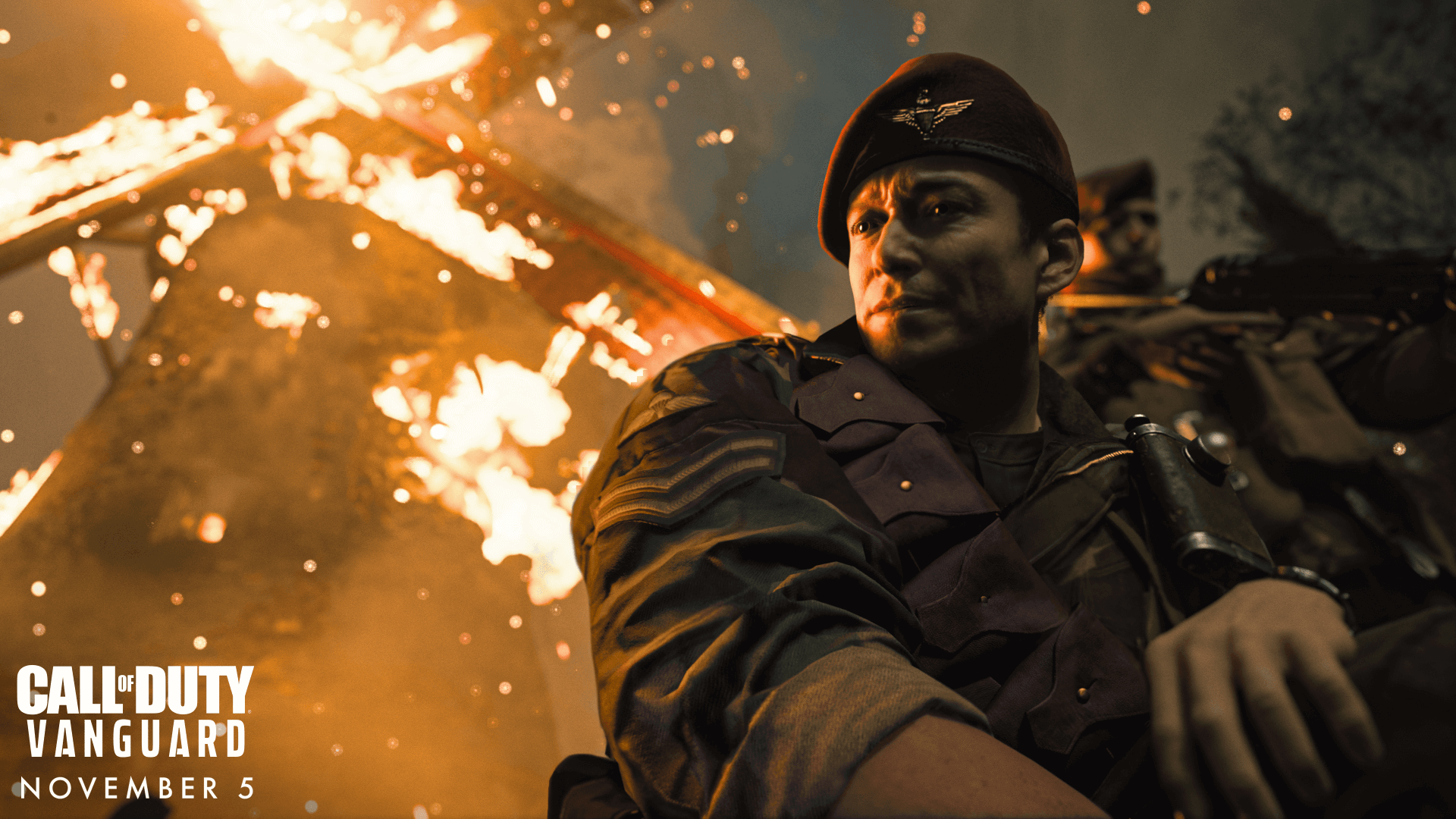 One area Vanguard does improve, however, is in telling a fictionalized story set within a real conflict. Yes, this is essentially what Call of Duty always does, but it feels less tacky when the story is removed from the murky military politics of the modern warzone. Nazis are the bad guys, and that’s just something any reasonable mind can easily accept. Here they’re portrayed as caricatures – racist, unfeeling monsters who you can gun down without guilt.

It also does have some new ideas. Each character has their own specialty, though they barely impact the moment-to-moment play. The British guy can give orders, but it’s only ever: “shoot the thing”. The AI also regularly fails at actually shooting the thing you want them to shoot at. The Russian sniper can move through crawlspaces more quickly than everyone else. The demolitions expert has a visible throwing arc on his grenades, and he can carry more throwables. And the pilot, inexplicably, has an aimbot hack that allows him to clear a room with precision headshots in seconds. Yes, the pilot is the best infantryman, for some reason.

Elsewhere, there’s also blind firing, which allows you to shoot over cover without exposing yourself. It’s a bit inconsistent with when it wants to work, so you’ll likely forget this is even a mechanic by the halfway point. And then there’s destructible scenery, which allows you to rip apart wooden walls with weapon fire. In single-player, it adds very little, but it does make your weapons – which, as is the norm in Call of Duty, feel incredible anyway – seem even more devastating. The place where destruction is most impactful is in the multiplayer portion, which is where the majority of players will be spending their time. 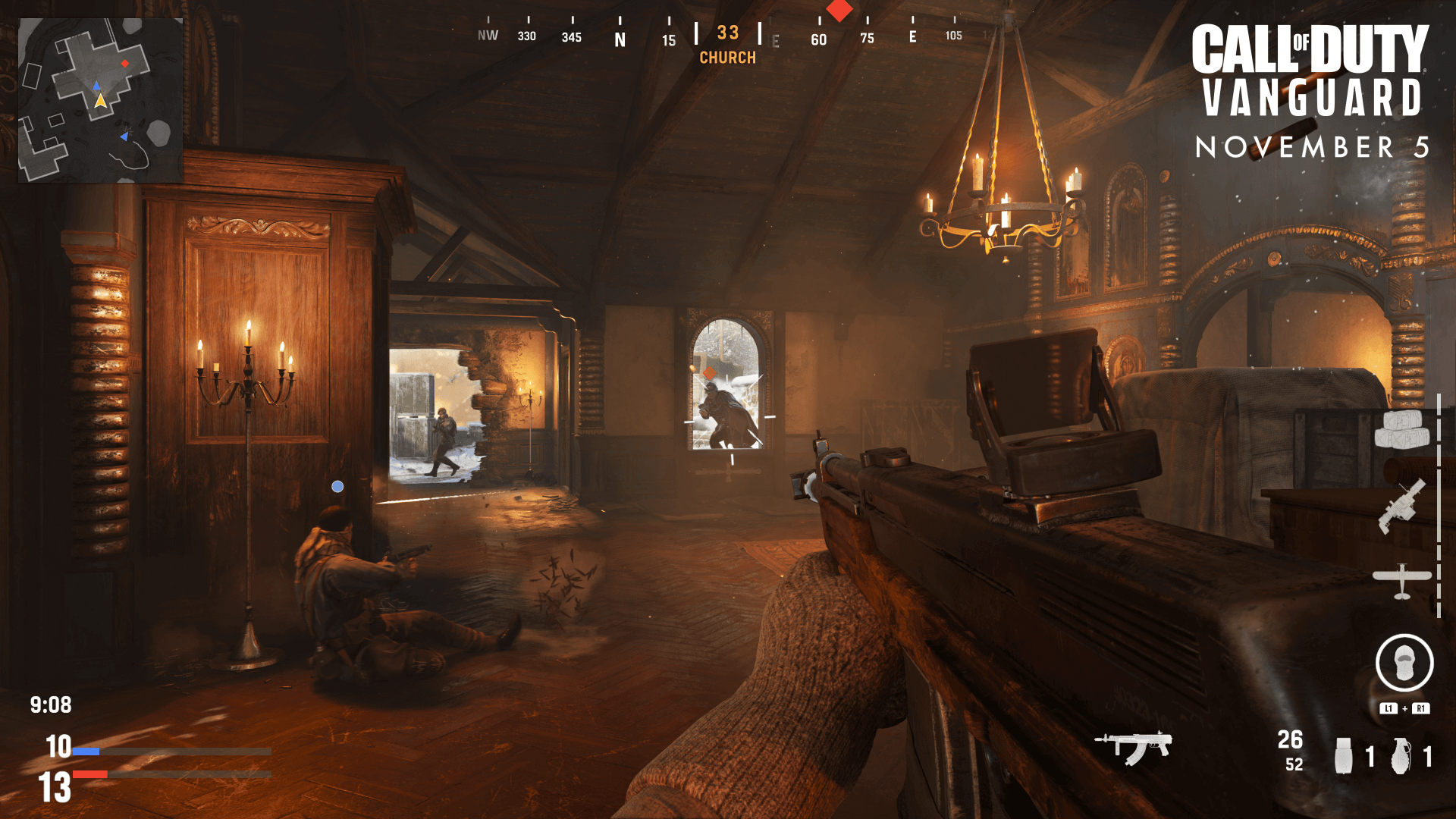 It’s hard to talk about Vanguard’s multiplayer because it’s essentially identical to the last few games. The only major difference is that destruction. You could always shoot through walls in this series, but now bits of wood fly off with every bullet, which means people can also see through walls. It opens up more angles on every map. But more angles to be shot from in a game where death comes quick and often isn’t necessarily a good thing. It’s essentially Rainbow Six Siege on a sugar rush – running, jumping, slide canceling, and throwing grenades into random spots are the order of the day. Die. Spawn. Repeat. F. F. F.

Where other shooters have what I’d call maps, Vanguard’s arenas feel more like meat grinders. Most of them are compact and it’s close to impossible to avoid being flanked since people often spawn right behind you. The only way to escape the grinder is to play Search & Destroy, in which everyone has only one life per round so they stop acting as if they’ve just downed a bag of Skittles.

You can dial the chaos back a little with the new Combat Pacing feature, which allows you to dictate what kind of player count matches you want to be crammed into, but it’s still Call of Duty, and everyone still has a rocket up their backside. There are also a lot of maps for a Call of Duty game at launch – 16 of them, in fact – so there’s plenty of battlegrounds to master as you pour hundreds of hours into multiplayer. 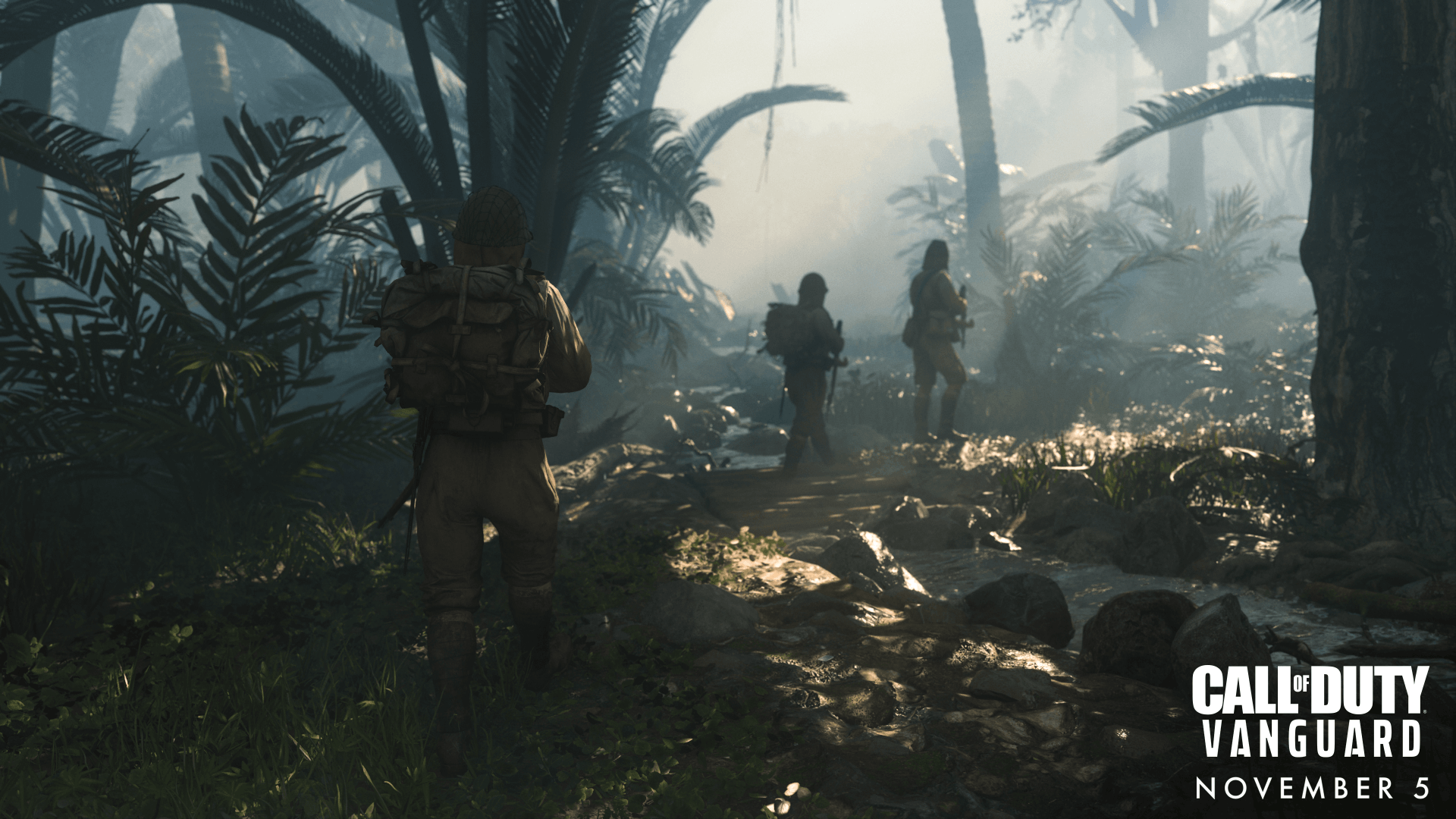 Then there’s the new Patrol mode, which sees teams capturing a moving point. It suits Call of Duty’s run and gun gameplay better than capturing and holding a  static area. Champion Hill is another cool new addition, adding a battle royale-esque wrinkle to the classic Gunfight. Set across four dedicated maps, eight squads of two or three battle it out to be the last team standing. Between rounds, you use buy stations to tweak your loadout. It feels like the only mode in Vanguard outside of Search & Destroy where teamwork really is essential.

That’s another issue with Vanguard’s multiplayer. Call of Duty has always been a selfish game, but the developers worked hard over the years to add incentives for playing the objectives and working together. Scorestreaks rewarded you for capturing and holding zones over camping and killing, but those have gone now, replaced instead by the Killstreaks of old. These incentivize looking out for yourself and finding a good spot where you can kill a series of enemies in relative safety so you can bring in the attack dogs and clean up. 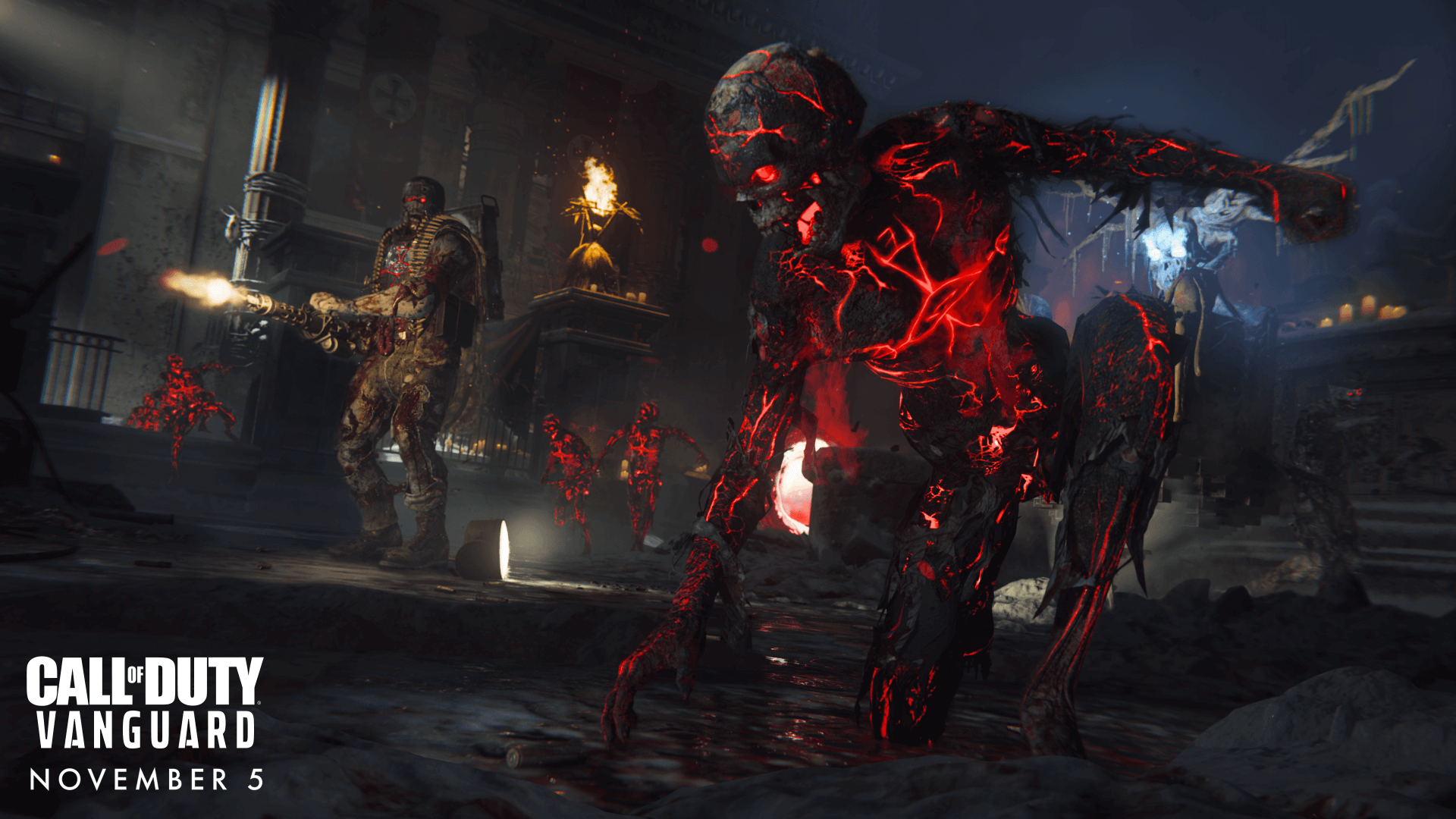 Elsewhere, we have the Zombies mode, which perhaps sees the most innovation. It feels a bit silly to say this after bemoaning how little the game veers from tradition elsewhere, but I’m not a fan of the new direction Zombies has gone in. Starting from a hub area, you and the team head through portals to complete objectives before coming back. There are three objective types and three enemy types, and it quickly becomes repetitive. It’s also just not as satisfying to shoot zombies who appear in front of you from a portal as it is to board up windows and try to push back the advancing meat army.

It’s difficult to even write a Call of Duty review these days, and I don’t mean just because of the toxic work culture at Activision Blizzard either. Like the game, which is bulging at the seams with modes, it’s starting to feel like prescribed [hashtag] content. We get one of these games every year, and everything that’s worth saying about them has been said ten times over. I imagine it’s the same for the developers, who are clearly running out of ideas. It’s not a bad game by any means, it just doesn’t make me feel anything at all. In the pantheon of Call of Duty games, Vanguard is somewhere in the middle and will quickly be forgotten by the time the next one rolls around in less than a year. F.

Written by Kirk McKeand on behalf of GLHF.