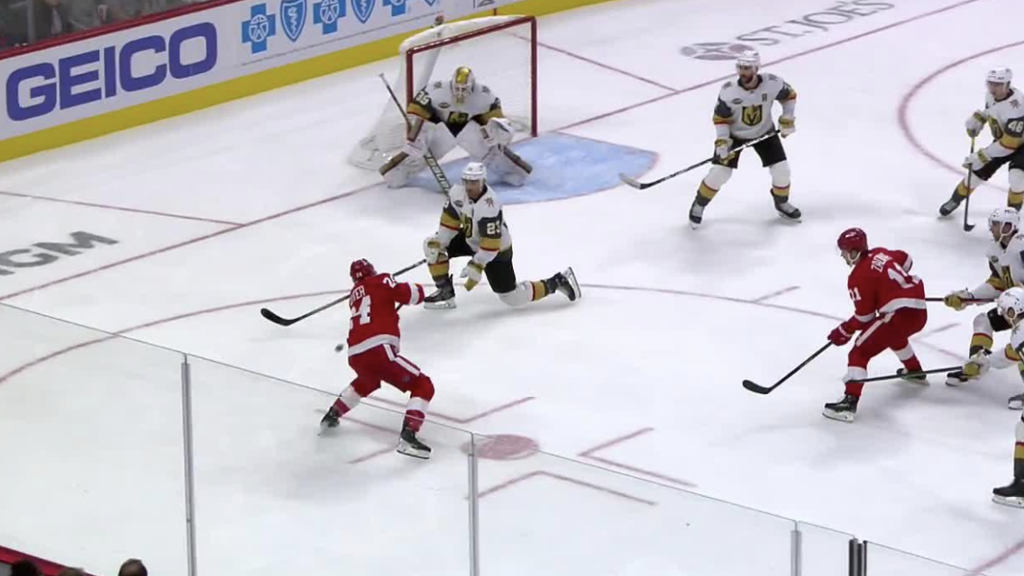 DETROIT — Pius Suter had a goal and an assist for the Detroit Red Wings in a 5-2 win against the Vegas Golden Knights at Little Caesars Arena on Sunday.

Tyler Bertuzzi scored an empty-net goal and had an assist, and Thomas Greiss made 38 saves for the Red Wings (6-5-2), who went 2-for-4 on the power play to start of a four-game homestand.

“Obviously, special teams were a huge factor tonight,” Detroit coach Jeff Blashill said. “We won this one with special teams and great goaltending.”

“It’s a .500 road trip, which is OK,” Vegas forward Jonathan Marchessault said. “It could have been a great road trip if we had won tonight, but we didn’t get it done.”

Roy gave the Golden Knights a 1-0 lead at 3:48 of the first period after Detroit forward Dylan Larkin broke his stick.

The Red Wings scored twice on the power play to take a 2-1 lead.

Lucas Raymond one-timed a pass from Bertuzzi to tie it 1-1 at 8:17 of the first, and Robby Fabbri scored at 10:13 to put Detroit in front.

Raymond leads NHL rookies with 14 points (six goals, eight assists) in 13 games. Five of those points have come in the past three (two goals, three assists).

Video: VGK@DET: Raymond one-times a pass on the power play

The Golden Knights outshot the Red Wings 13-7 in the first period.

“I thought we played our best first period of the road trip, and we were down 3-1,” Vegas coach Peter DeBoer said. “I’m sure Laurent would want at least one of those back, but we are asking him to play once every two weeks, and that’s tough. He made a lot of great saves tonight as well.”

Video: VGK@DET: Fabbri fires a shot home from the circle

Vladislav Namestnikov gave the Red Wings a 4-1 lead at 11:39 of the second period, banking the puck in off Brossoit’s back.

“I thought the second period might have been our best stretch of hockey this year,” Larkin said. “I thought we outworked them tonight. Every guy worked hard, and Thomas Greiss was incredible.”

Marchessault made it 4-2 at 4:25 of the third with a shot from the slot, but Greiss made 19 saves in the period.

Bertuzzi scored an empty-net goal with 11 seconds left for the 5-2 final. It was his ninth goal of the season.

“He’s a good goalie, he’s going to stop anything he can see,” Vegas defenseman Shea Theodore said of Greiss. “We needed to do a better job of getting in front of him and taking away his eyes.”