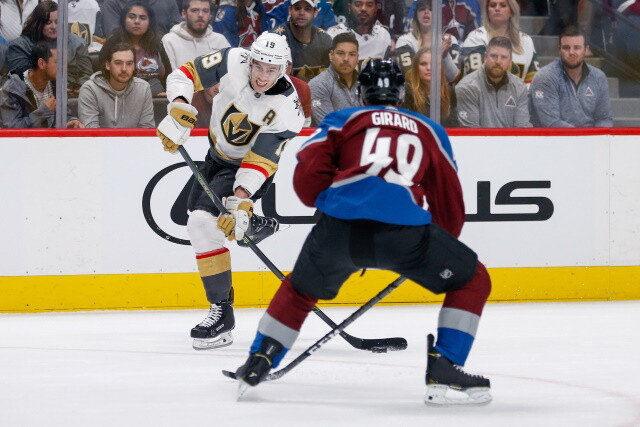 Believe that this is part of the reason the Colorado Avalanche were in on Jack Eichel trade talks. Now that Eichel has been moved to the Vegas Golden Knights, Girard could be used in another deal for a forward or possibly even a goalie down the road.

Devon Toews is back from injury, and the Avs are pretty deep on the left side of their blue line.

Justin Emerson of the Las Vegas Sun: It seems unlikely that the Vegas Golden Knights will have Jack Eichel, Mark Stone and Max Pacioretty on the LTIR all season, so they’ll need to make some other moves eventually.

“It’s an ongoing dance that capologists around the National Hockey League have to be adept at,” General Manager Kelly McCrimmon said. “You do have to ask yourself what happens if we return to full health, and yet sometimes you never return to full health. We’ve never experienced anything quite like what we’re going through right now. One of the downsides of injuries like we have currently is they sometimes lead to more injuries from overuse of players and that type of thing.

“If and when that poses a challenge for us, we’ll address it at that time. All things considered, we’re happy to have Jack Eichel as part of our organization and prepared to deal with that if need be.”

They may eventually need to move over $7 million off the cap if/when everyone gets healthy.

Reilly Smith and Evgenii Dadonov each make $5 million and play the right side. One of the two could be moved later this season when they need to create some space. Mattias Janmark makes $2 million could be moved, as well as Brett Howden. Moving that many extra forwards to clear space would leave them thinner upfront.

Brayden McNabb is a pending UFA and carries a $2.5 million cap hit.

Trading Dadonov and McNabb would give them enough room.

Vanguard’ review – the battle of the bulge