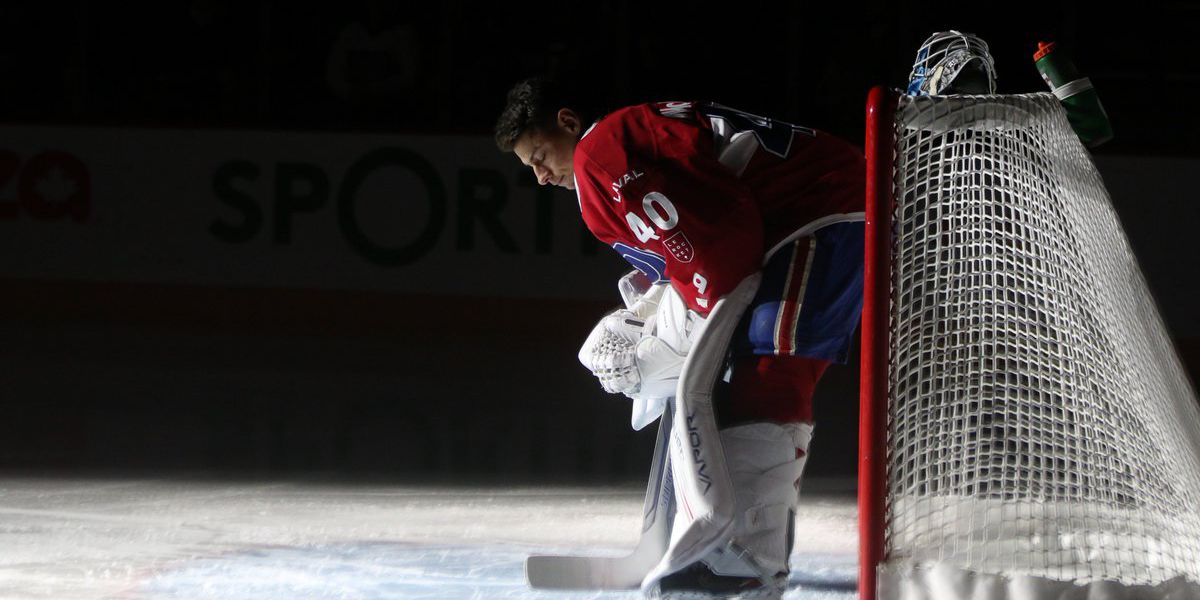 The Laval Rocket rolled into Utica for their first meeting of the year with the Comets at a bit of a crossroads. The team had lost three straight games despite not playing poorly in any of them. So for head coach Jean-François Houle, he opted to keep the Rocket lineup intact, with some minor alterations to the lines and defence pairs only.

Mattias Norlinder was bumped up to play with team captain Xavier Ouellet, while Corey Schueneman was dropped to the third pair with Louie Belpedio. Laurent Dauphin was also promoted to the top line opposite of Cole Caufield, while Rafaël Harvey-Pinard took his previous spot on the second line. Michael McNiven got the nod in net.

In terms of starts, the Rocket have had better ones this season as the Comets dominated the opening minutes of possession, and in that time drew a hooking call for an early power play. The Rocket penalty-killers managed to keep the extremely dangerous Utica power play pretty well in check, not allowing more than a single shot on McNiven as they killed off Dauphin’s minor penalty.

With the game’s first penalty killed off, the Rocket found a bit of offensive juice but failed to get zone time, and the game remained scoreless as the first period ticked on. The Comets counter-attack eventually netted them another power play, this time with Ouellet taking a seat for slashing.

On the ensuing kill, the Rocket found a bit of good fortune as McNiven was beaten cleanly but the puck clanged off the post to keep the Comets off the board. They ended up clanging a few more shots off the pipes behind McNiven, but nothing bounced in their favour as the teams headed into the first intermission with zero goals between them.

It didn’t take long in the second period for the Comets to get a bounce to finally go their way as Tyce Thompson put them on the board. A shot from the point bounced off the end boards behind McNiven and Fabian Zetterlund managed to chip the puck across the front of goal. Thompson beat his man to the loose puck and easily fired it home as McNiven tried to get across with the pad.

That lead grew to two goals before long as Ouellet was caught deep in the offensive zone, leaving Norlinder alone to defend. The Comets flew the zone and ended up with a three-on-one rush with just Norlinder and McNiven at the back. The Rocket goalie mad the initial save, but wasn’t able to stop the rebound chance from Joe Gambardella.

Following that goal, it was all Comets as the Rocket struggled to get their breakout and offensive attack in order. In fact, Laval didn’t generate much of anything until the final 90 seconds of the period when they were able to draw their first power play and then turn that into a five-on-three shortly afterward.

While the Rocket didn’t cash in before the intermission, they had their two-man advantage carry over to start the third period on a fresh sheet of ice.

That great opportunity yielded nothingm but the Rocket were able to break the shutout inside the first minute. Ryan Poehling whipped a pass up to Dauphin, who fired his chance on net, and he got a bit of a lucky bounce as his shot went over Nico Daws for Dauphin’s seventh goal of the campaign.

Utica nearly restored their two-goal advantage immediately as Zetterlund made a great read to poke the puck away from Ouellet and make his own breakaway happen. McNiven was up to the task though, stretching out his pads to deny the Comets a third goal.

The Rocket were handed another golden chance as Gambardella ran into McNiven behind the Laval net, sending the Rocket back to the power play. The Utica penalty-killers kept the Rocket out of the dangerous areas, even as Caufield circled their zone with ease. A few missed passes to the point ended up trickling out of the zone, and before long the Rocket had effectively killed their own penalty off and still trailed by a goal.

With all the momentum on Laval’s side, a single error by allowed Utica to double their lead. Gianni Fairbrother half attempted to move into the right space for a Caufield pass in the offensive zone, and Utica launched into an odd-man rush. McNiven was set for the initial shot, but it was swept out only as far as Graeme Clarke, and the Comets forward buried his chance.

The Rocket weren’t content with letting that stand and continued to hound Utica in their attempt to tie the game up. They managed to get back within one goal with just under five minutes remaining, thanks to the persistence of Jesse Ylönen. He nabbed a puck that was cleared out from behind the net, then stuck with it as he swatted it past Daws to give Laval a glimmer of hope late in the game.

With the game down to its final minutes, the Rocket pulled McNiven, but a missed empty-net chance from the offensive zone still turned into an empty-netter for the Comets. Norlinder was lackadaisical going back for the puck and Jesper Boqvist beat him to it, before slotting home the insurance goal.

Laval now heads back to the confines of Place Bell, where they’ll play the Belleville Senators at 7:30 PM on Wednesday night.

The transfer budget Real Madrid reportedly have for summer…

Monaco tell Chelsea, Liverpool and Real Madrid how to…