Game Preview | 5 things to know ahead of Sabres at Capitals 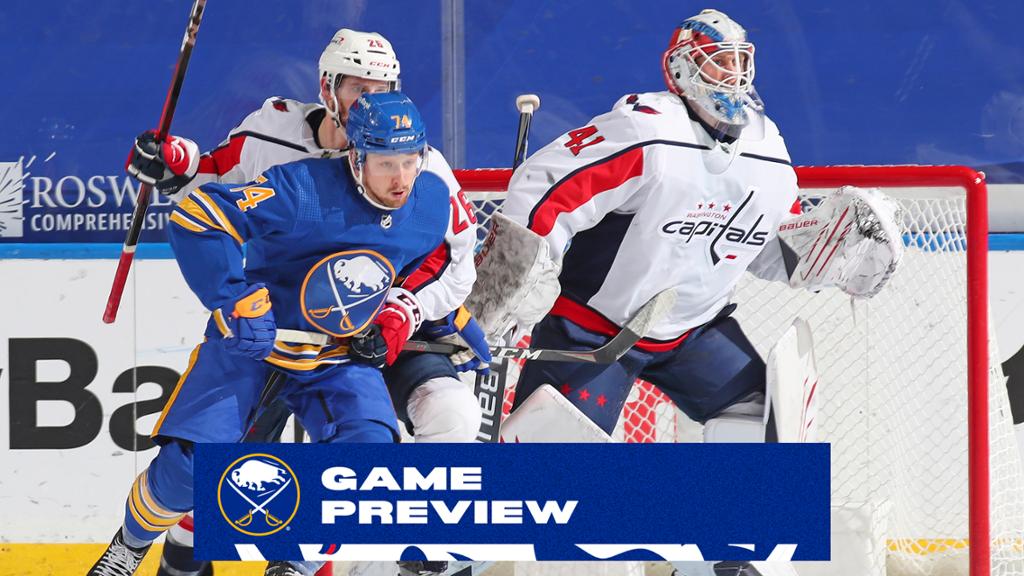 The Sabres will look to end their four-game winless streak when they visit the Washington Capitals at Capital One Arena on Monday.

Buffalo is coming off an overtime loss to Detroit on Saturday in which it surrendered a two-goal lead with 6:36 remaining in regulation.

Here are five things to know ahead of the game.

The Sabres held an optional skate and thus did not show their forward lines and defense pairs, but coach Don Granato hinted at potential shuffling on the back end.

The Sabres have dressed the same six defensemen for every game since Henri Jokiharju sustained a lower-body injury on opening night. Christian Wolanin, who was claimed off waivers from Los Angeles on Oct. 16, has yet to make his debut.

The team will be without forward Victor Olofsson and goaltender Craig Anderson, both of whom remained in Buffalo and are considered day to day.

Granato did not reveal whether the Sabres will stick with Dustin Tokarski or turn to Aaron Dell, who was recalled Saturday in the wake of Anderson’s injury. Tokarski made 29 saves in the overtime loss to the Red Wings.

Vitek Vanecek is expected to start for the Capitals. He is 2-2-3 with a .908 save percentage in eight starts.

Rasmus Asplund has points in six straight games following a two-assist outing against Detroit. The streak has propelled him to the team lead with 10 points (4+6) in 11 games this season.

Read more about the offseason work that went into Asplund’s strong start here.

The Sabres have allowed four goals or more in each of their last three losses. They had held opponents below four goals in all but one of their first eight games.

Granato was asked to assess the team’s defensive performance to date.

“There’s plenty of both ends of the spectrum,” he said. “I think you’d find that at anybody’s 11-game sample. We have it where the errors that are made when you review them on film, the players understand immediately because the system is in place and they can correct their own error at that point visually after the fact.”

Washington opened the season with an eight-game point streak (5-0-3) but has since dropped three straight games coming off a 2-1 loss to Philadelphia on Saturday. The team is without three key forwards in Nicklas Backstrom, T.J. Oshie, and Anthony Mantha.

Still, the Capitals rank sixth in the NHL in goals scored per game (3.36). Alex Ovechkin is tied for the NHL lead with 10 goals as he continues his ascent up the all-time leaderboard, now just one goal shy of fourth-place Brett Hull (741).

Granato singled out puck management as a key to limiting their attack.

“They have scorers, but they have an intelligence obviously with the experience they have as players,” Granato said. “You’ve got to manage the puck well. They’re waiting for you to give them something easy and they’re smart when they pressure.”

Call of Duty: Vanguard review: “a solid installment with a satisfying story and great multiplayer”