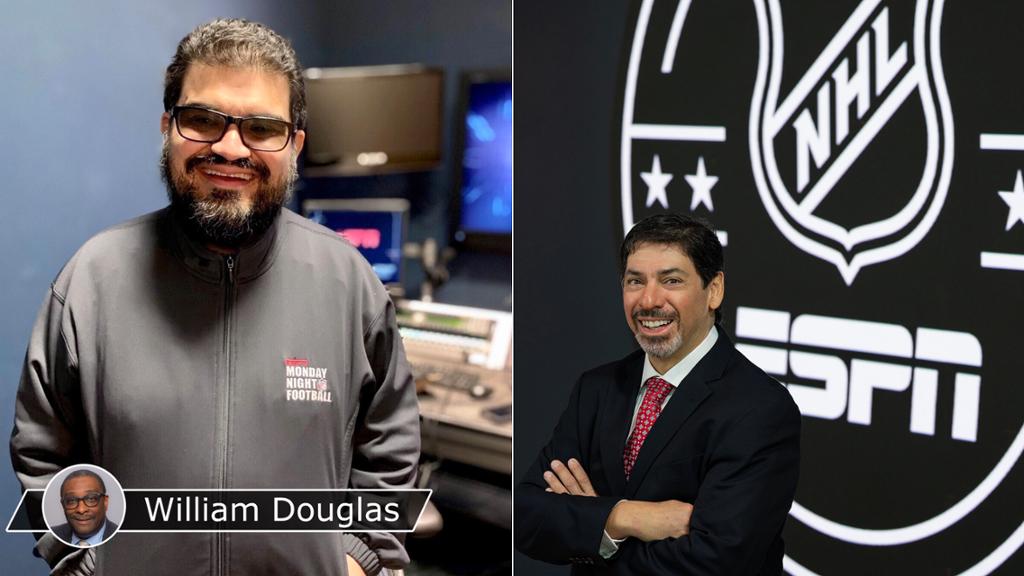 William Douglas has been writing The Color of Hockey blog for the past nine years. Douglas joined NHL.com in March 2019 and writes about people of color in the sport. Today, he profiles Carlos Rossell and Kenneth Garay, who broadcast NHL games for ESPN Deportes.

Rossell is the savvy veteran who has delivered hockey analysis in Spanish on TV and radio for more than 20 years, coaches the sport and played it at the junior and college levels.

Garay is the versatile, award-winning broadcaster who has done Spanish play-by-play for National Football League, Major League Baseball, soccer games and other sporting events for more than 25 years and is getting up to speed on the NHL.

“I call Carlos ‘Coach’ because he’s a hockey coach and all he’s done in hockey before,” Garay said. “Whatever I miss, he can educate me or just continue to push me.”

Rossell and Garay, along with Etan Benezra and Antonio Valle, are part of a team providing exclusive Spanish-language NHL coverage across the Walt Disney Company-owned linear and digital platforms, including ESPN Deportes, ESPN+ and the ESPN app.

ESPN will air up to 50 games in Spanish this season, including the 2021 Thanksgiving Showdown between the St. Louis Blues and Chicago Blackhawks, the Stanley Cup Final, Conference Finals and Stanley Cup Playoffs as part of its seven-year rights broadcast deal with the NHL.

The Spanish-language broadcasts dovetail with efforts by the NHL and some of its clubs to increase their Hispanic fan base.

Rossell and Garay said the increased profile of Spanish-language broadcasts in hockey is welcome and overdue.

“I’ve been the witness to the growth of American football broadcasts in Spanish,” Garay said. “Baseball, forget it, baseball has been growing for many, many years. I think it could be the same in hockey. We just have to be consistent.”

Rossell and Garay took different routes to hockey broadcasting. Rossell, the son of Nicaraguan and Guatemalan parents, discovered hockey as a teenager growing up in New York’s Washington Heights section.

“A bunch of kids on the block were playing roller hockey,” he said. “I saw them doing it and thought, ‘That looks kind of cool.’ That’s how it got started playing on quads, four steel wheels on the sidewalk outside of my mother’s building.”

Rossell said he didn’t know hockey was played on ice until he happened upon on a New York Rangers game on TV when he was channel-surfing one day in 1974.

He unsuccessfully tried ice skating once. After watching the Rangers game, Rossell said he got a pair of rental skates, went back to the rink and taught himself how to stand and move on blades.

“The next thing you know, I’m playing hockey for All Hallows High School in the Bronx,” he said.

Rossell was good enough to catch the attention of Lou Vairo, the Brooklyn-born U.S. Hockey Hall of Famer who coached the 1984 U.S. men’s Olympic hockey team, at a hockey camp in near the Jersey shore.

“He said, ‘If you want to, I can put you in a position where you can play 50-plus games a year and practice full freight every day,'” Rossell said.

Rossell ended up playing three seasons for Binghamton of the New York-Penn League and later for Elmira College.

Rossell said he fell into broadcasting when a woman he was coaching at Manhattan’s old Sky Rink connected him with someone she knew who was doing Spanish language hockey for The NHL on FOX.

“I was interviewed by two guys and then they said, ‘Go to FOX studios,” he said. “They said go, ‘Go in that booth.’ They put a headset on me and said they said, ‘Here’s your cough button, here’s your mute button, and you figure it out with your play-by-play guy who’s going to do the ads.'”

Garay’s hockey initiation began when he covered the Florida Panthers’ march to the 1996 Stanley Cup Final against the Colorado Avalanche and the fervent fans at Miami Arena who tossed plastic rats onto the ice to celebrate the home team.

Garay, who was born in New York and raised in Bucaramanga, Colombia, said he continued to listen to Manolo Alvarez, Arley Londono and Octavio Sequera call Panthers games in Spanish over the years, with his own play-by-play career progressing covering other sports.

“That’s basically my exposure to hockey,” he said.

That is until Garay and Rossell were paired by ESPN to broadcast the past two NCAA Frozen Four tournaments.

“What I am first and foremost is a broadcaster and a play-by-play caller,” Garay said. “Now, I’ve been gathering information. I know that the [Seattle] Kraken are the 32nd team, I know the last two successful years of the Tampa Bay Lightning. Little by little I’m trying to get more in the rhythm.”

Garay said perhaps the biggest challenge of calling a game in Spanish is some hockey phrases don’t easily translate. So he’ll likely use the English terminology and let the action speak for itself.

“The puck, I don’t call it ‘disco,’ I call it ‘puck,'” he said. “What we’re going to do is translate the emotion that we’re used to in soccer and American football, and that counts as much with the language.”

Real Madrid Have Yet To Figure Out Their Two-way Balance, But Still Sit Top