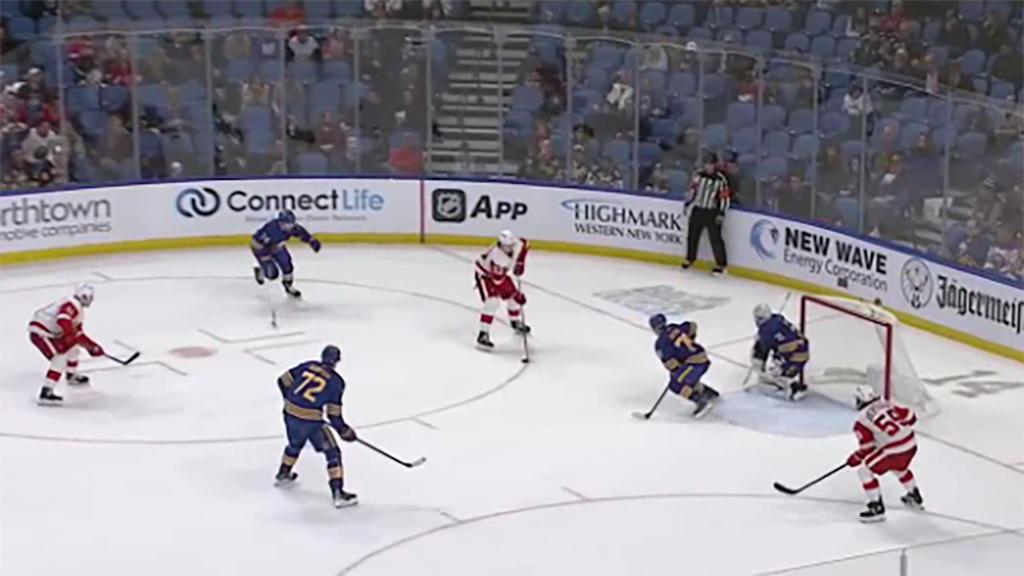 BUFFALO — Moritz Seider scored his first NHL goal 2:45 into overtime to give the Detroit Red Wings a 4-3 win against the Buffalo Sabres at KeyBank Center on Saturday.

Seider, playing his 12th NHL game, took a pass from Tyler Bertuzzi just after coming onto the ice, skated around Rasmus Asplund and scored to complete a comeback for Detroit, which trailed 3-1 in the third period.

“Obviously really happy with the ‘W’ tonight,” Seider said. “Great comeback. Huge plays by [goalie Alex Nedeljkovic], saved us a couple times. And obviously it’s nice to get the first one.”

Bertuzzi had two goals and two assists, Lucas Raymond had three assists, and Nedeljkovic made 29 saves for the Red Wings (5-5-2), who had lost four straight.

Bertuzzi took a cross-ice pass from Danny DeKeyser and scored from the right circle to bring the Red Wings within 3-2 at 13:24 of the third period and tied it 3-3 at 14:54 when he got around Rasmus Dahlin to score from the slot.

“‘Bert’s’ a [heck] of a player,” Red Wings coach Jeff Blashill said. “He’s a [heck] of a competitor, he’s a great person. I don’t know if he gets his due all the time for as good a player as he is. He’s had a big impact in the games that he’s played in, for sure, and certainly tonight he had a huge impact.”

Asplund had two assists, and Dustin Tokarski made 29 saves for the Sabres (5-4-2), who lost their fourth straight.

“They probably got uptight before the second [Bertuzzi] goal,” Sabres coach Don Granato said. “It was the defensive zone. It wasn’t any doing of [the Red Wings] part. It was us. We just slid out of position and created, opened a seam, which is uncharacteristic. … Because it was a simple coverage that we’ve done over and over and over.

“So I would have to say we were a little tight there, tense there. For what reason? There was no reason. The unfortunate part is you have to learn from it.”

Pius Suter gave the Red Wings a 1-0 lead 16 seconds into the first period. Bertuzzi won a battle behind the net and backhanded a pass into the crease. The Red Wings took several jabs at the puck before Suter pushed it in from the right side of the net.

Tage Thompson tied it 1-1 at 11:32 of the second period. Jeff Skinner faked a wraparound attempt before stopping behind the net and passing the puck through Nedeljkovic’s pads to Thompson in front, who scored far side.

“He made a great play,” Thompson said of Skinner. “I just knew if I came in right off of him, right behind him, I had the opportunity. If he didn’t make that play, went behind the net the other way, I’d still be able to get there, so it was a great play.”

Dahlin gave the Sabres a 2-1 lead with a shot from the point on the power play past a screened Nedeljkovic at 12:36.

Arttu Ruotsalainen got on the rebound of a Colin Miller shot at the left side of the net to extend the lead to 3-1 at 6:08 of the third period.

“I thought in the first period we came out and we had good confidence,” Blashill said. “We were playing good hockey and we had opportunities to potentially be up by a few goals that didn’t go in. And then all of a sudden they score, and they scored again. We started to dip a little bit. To dig in there late I thought was huge, led by Tyler Bertuzzi. I just thought he did a real good job of making sure that we dug in. To find a way to come back is big.”

NOTES: Detroit selected Seider with the No. 6 pick of the 2019 NHL Draft. He had nine assists in the first 11 games and was named NHL rookie of the month for October. He is the second player and first defenseman in Red Wings history to score his first NHL goal in overtime (Mud Bruneteau, Dec. 14, 1935). … Raymond, 19, is the fifth teenager to have three assists in a game for Detroit, joining Steve Yzerman (four times) and Alex Delvecchio, Gordie Howe and Harry Watson, who each did it once. … Bertuzzi also had a four-point game (four goals) in a 7-6 OT loss to the Tampa Bay Lightning in the season opener Oct. 14. … Asplund extended his point streak to six games (three goals, five assists). … Sabres forward Zemgus Girgensons played his 500th NHL game. … Forward John Hayden had an assist, his first point for Buffalo after signing a one-year contract July 29. … The Sabres called up goalie Aaron Dell from Rochester of the American Hockey League on Saturday to back up Tokarski with Craig Anderson day to day with an upper-body injury. … Prior to the game, the Sabres honored Val James on the 40th anniversary of him becoming the first Black American player in the NHL.

Jones makes 31 saves for Flyers in win against Capitals