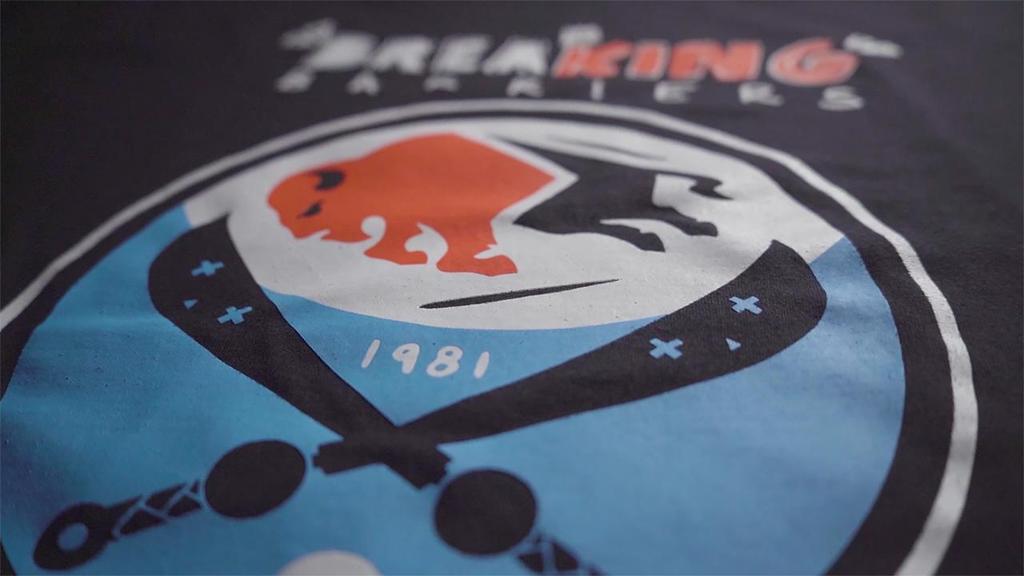 On the 40th anniversary of his NHL debut, Val James was honored by the Buffalo Sabres with his own threads.

James became the first Black American to play in the NHL when he made his debut on Nov. 1, 1981. James pushed the NHL toward inclusion and progress, so during warmups at KeyBank Center on Saturday, the Sabres wore custom black jerseys featuring the “Breaking Barriers” logo designed by local artist Edreys Wajed.

“How do you pay tribute to Black history without writing the word, Black history?” Wajed said in a video. “The design had to walk on really fragile ice in order to get to that place that I felt is strong, is powerful and brings awareness.”

For the logo, Wajed replaced the sabers with the akofena, a sword native to the Ashtani people of Ghana. The akofena signifies courage, strength, heroism and bravery. Wajed used it as a focal point of the logo because he said people of African descent would recognize it.

“My task was to keep the logo intact,” Wajed said. “Still, how do we pay tribute to Black history?”

The designer incorporated the vibrant orange and blue colors from the Buffalo Braves. The former NBA team existed from 1970-78 and shared the Buffalo Memorial Auditorium — commonly referred to as “The Aud” — with the Sabres, who also debuted in 1970.

Before the game Saturday, the Sabres and Detroit Red Wings used pucks with the “Breaking Barriers” logo and the teams, coaches and broadcasters wore special lapel pins with the logo during the game.

“Breaking Barriers” represents exposure to different opportunities and to all children that NHL dreams are achievable.

“You can’t aspire for something that you haven’t seen,” Wajed said.

James played 11 games over two seasons in the NHL. He was selected No. 184 by the Red Wings in the 1977 NHL Draft and played seven games for the Sabres in 1981-82. After a four-season hiatus, the Florida-native played four games for the Toronto Maple Leafs in 1986-87.

At the time, James said his sights weren’t set on making history as the first Black American player to hit the ice, but on seizing his chance to play at the highest level.

“I had never played with or against another Black hockey player in my life and I started playing hockey when I was 3 years old,” former NHL player Tony McKegney said in a video. “I thought about what Val went through, going through the ranks to get to where he was.”

James and McKegney were teammates in Buffalo during the 1981-82 season. A third teammate, Larry Playfair, said James was willing to do anything to don the Buffalo sweater.

“I didn’t have to deal with [adversity] and he dealt with it from the time he put skates on,” Playfair said. “He accepted it as, ‘That’s what I’m up against.'”

McKegney said he thinks of baseball’s Jackie Robinson when he thinks of James, two trailblazers who paved the way for inclusion and diversity in professional sports.

James couldn’t attend the “Breaking Barriers” game in person, but his legacy and contribution to the game knows no bounds.

Tweet from @BuffaloSabres: Paving the way for generations to come. Tonight, we celebrate Val James. pic.twitter.com/ltFO2RdE2q

“It’s nice to have contributed to a sport and, hopefully, something that the younger generation can look up to and realize it doesn’t matter who you are, what you are, what color you are,” James said. “As long as you perform and give it 100 percent, you’re going to make it.”

Call Of Duty: Vanguard is a disaster from the very start