Markstrom gets another shutout for Flames in victory against Rangers 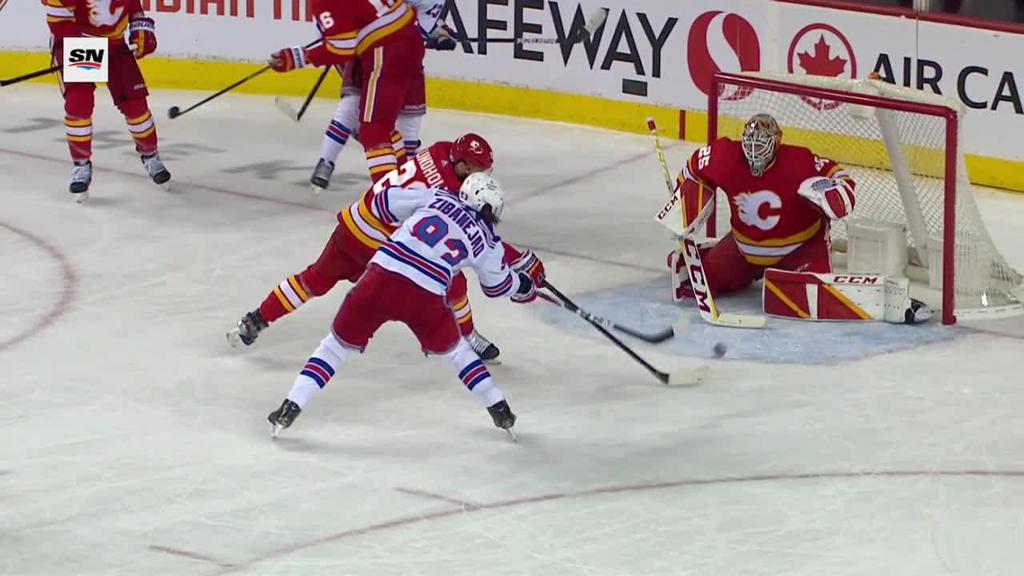 CALGARY — Jacob Markstrom‘s fourth shutout of the season helped the Calgary Flames extend their point streak to 10 games with a 6-0 win against the New York Rangers at Scotiabank Saddledome on Saturday.

“Tonight we had some pretty good chances and they were able to go in for us, which was nice,” Tkachuk said. “We needed a game like this to get going again offensively because this team needs us on a nightly basis to be successful.”

“It stings,” New York forward Chris Kreider said. “You don’t want it to ever happen again, but we’ve got to go home and get better in a hurry and work on our process. It doesn’t matter what the score is in the game. We have to play the same way. We have to trust each other and trust the system. We can’t get away from that regardless of the situation or the context.”

Markstrom made 22 saves to reach an NHL career-high in shutouts, coming in nine starts this season.

“It says a lot more about the team and the way we’re playing,” Markstrom said. “It’s really defensively sound and guys are blocking shots, and not only on the penalty kill and 5-on-5, but [the power play] has been great, it was great again today. Early, that was a difference-maker. We obviously got the goal from [Sean Monahan] and got a couple big kills that gave us the momentum to go the other way.”

Monahan one-timed Tkachuk’s cross-ice pass into the slot to put Calgary up 1-0 at 16:00 of the first period. The goal, on the power play, is Monahan’s second in 11 games this season.

The Flames are 7-0-1 when scoring first this season.

Adam Fox, drafted by the Flames in the third round (No. 66) of the 2016 NHL Draft, scored with 1:43 remaining in the first, but Calgary successfully challenged Sammy Blais was offside before Fox entered the zone.

“It obviously would’ve been nice if that counted, but it was 1-0 at that point,” Rangers forward Barclay Goodrow said. “One goal isn’t going to deflate us when the lead is only one. Obviously it would’ve been great to have. We have to do a better job in responding after we get scored against.”

Brad Richardson scored his first goal of the season on a rebound off the end boards on Oliver Kylington‘s wide shot for a 2-0 lead at 9:15 of the second period.

Gaudreau’s second goal came between a Markstrom glove save on Ryan Strome 58 seconds into the period and another on Mika Zibanejad at 12:45.

“He can obviously make those saves, but it’s the ones that are hard that we know that are hard that he makes look so easy, and he’s doing it each and every night for us right now,” Tkachuk said. “Just playing unbelievable hockey for us and giving us a chance to win every single night.”

Milan Lucic pushed the lead to 5-0 at 13:13, and Tkachuk went between the legs before lifting a shot over Shesterkin to make it 6-0 at 14:56, his fourth goal in the past four games.

“I don’t know. I wasn’t really thinking there. It just happened,” Tkachuk said. “I was just kind of in an awkward position there backing up into the goalie and couldn’t really stop my momentum, so I just thought that was the best way to go about it. Lucky it worked out, but it was the sixth goal, so I guess it really didn’t matter. Still fun to see it go into the net.”

NOTES: Rangers center Filip Chytil was injured at 2:16 of the first period when he collided with Blais and did not return. There was no update. … New York forward Ryan Reaves had five hits playing 14:00 after missing four games with a lower-body injury. … Tkachuk has scored nine points (five goals, four assists) in a six-game point streak. … Monahan scored his 206th goal to tie Eric Vail for eighth in Flames history. … Gaudreau passed Gary Roberts for ninth in Calgary history with 508 points, one behind Mark Giordano for eighth. Gaudreau’s 334th assist passes Kent Nilsson for eighth place, two behind Guy Chouinard and Paul Reinhart. … Kylington had an assist to extend his point streak to six games (one goal, six assists). … Richardson scored his first goal in his second game with the Flames after signing a one-year contract Sept. 8. … Calgary is 6-0-0 against the Metropolitan Division and 7-0-0 against the Eastern Conference this season.

Coyotes recover late against Kraken, get first win of season