Khudobin in net, d-pairs coming together as Stars end trip in Vancouver 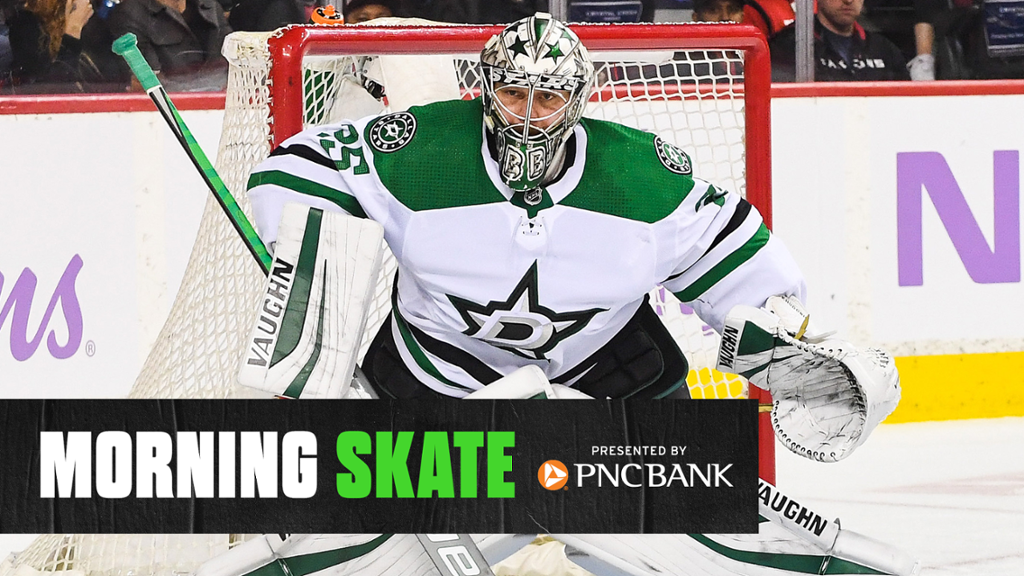 It seemed like a perfect storyline for Braden Holtby to return to Vancouver to take on the team that bought him out last summer, but Stars head coach Rick Bowness said he believes Anton Khudobin will give his team the best chance to win tonight against the Canucks.

“Dobby,” he said when asked for the starting goalie.

“History will tell you rarely do those things work out,” Bowness said. “It always sounds good. It always sounds a lot better than it works out. With Dobby coming off that win, we’ll go right back with him.”

Khudobin will get his first consecutive starts this season. He’s 2-1-1 on the year with a 2.74 goals-against average and .897 save percentage. He won 4-3 in overtime in Calgary on Thursday. Khudobin is 4-0-2 in his career against the Canucks and the Stars have been dominant in Vancouver. Dallas is on a 9-0-2 run at Rogers Place with its last regulation loss on March 30, 2012.

Video: ‘They’ve got a lot of skill. We need to respect that’

All of that said, the return for Holtby still is part of the process of assimilating to the Stars. He had a strange year in Vancouver, but it was a step away from his long-time home in Washington, and it probably made it easier for him to get a good reset in Dallas.

“What was it, a year and a half? It felt like four,” Holtby joked after practice Saturday. “It was just a strange year. Everything. For everyone. Not just me.”

Holtby joined the Canucks at a time when the NHL was reacting to the COVID pandemic, so divisions were restructured, and Canadian teams played against only Canadian teams. The Canucks had injury problems and aren’t known for their defensive prowess, so it wasn’t a total surprise when Holtby posted a 7-11-3 record with a 3.67 GAA and an .889 save percentage.

“You have high expectations every time you go into a season,” he said. “I thought that we would have a chance to push, to really compete, and it didn’t happen obviously.”

Holtby said he felt he learned a great deal with Vancouver goalie coach Ian Clark, and said he still is using that training as he works with Stars goalie coach Jeff Reese.

“Ian and I talked a lot throughout the year,” Holtby said. “I did some pretty good work foundation-wise.”

As for his new home, Holtby said he’s very happy.

“I think with Jeff, he has a lot of similarities to Scott Murray in Washington. In the same way, they’re really good at making you feel confident about who you are as a goaltender and just going out there and playing free,” Holtby said. “I think it’s challenging for everyone, but it’s fun. I mean, in challenges you can grow, and you can become a better person, a better player.”

As the Stars coaching staff tries to get John Klingberg and Ryan Suter clicking, they’re discovering that the other four defensemen are incredibly versatile.

Klingberg and Esa Lindell played together for years, so when the Stars signed Suter and decided to play him beside Klingberg, that forced some adjustments. Lindell played beside Heiskanen for a good deal of time in the first eight games, but when the team called up 20-year-old rookie Thomas Harley, that created the opportunity to play two young skilled defensemen beside each other, and the Stars have liked that in the past two games.

Video: ‘He’s always in the right spot and open for support’

As a result, Heiskanen and Harley have played together quite a bit, and Lindell has played beside Jani Hakanpaa. That pairing also has some pretty strong chemistry, as both Lindell and Hakanpaa are from Finland, and both have known each other for a few years.

“There was one summer we practiced together before I came over to the States, we had a few friends we both knew,” Lindell said of Hakanpaa. “We play a similar game, heavy, physical, try to close quickly in the D zone. We play simple, tape-to-tape passes and try to get pucks to the net.”

Bowness said that having Lindell and Heiskanen as a fallback pairing is also good for the coaching staff.

“When the game is on the line, Esa’s going to be playing with Miro. It gives us the flexibility to do that,” he said.

As for Suter and Klingberg, they’re a work in progress. Suter is averaging 23:06 and has four assists in 10 games. Klingberg missed four games with a lower-body injury and is averaging 21:28 with two assists in six games.

“There’s signs of progress,” Bowness said. “There’s little things. They’ve just got to get used to each other’s movement.

Bowness liked a lot of things about the 4-3 OT win in Calgary, other than taking too many penalties. As a result, the lineup will stay the same, with Khudobin in goal and Andrej Sekera, Joel Hanley and Tanner Kero as the healthy scratches.

That’s the average time on ice in nine games for Jason Dickinson with the Canucks. Dickinson was traded to Vancouver before the expansion draft after playing 221 games and recording 63 points with the Stars.

Vancouver has struggled to start games, getting outshot 127-90 in first periods and outscored 11-5. The Canucks have scored first in just two of 11 games.

“We’ve said from camp that we need the third and fourth lines to score some goals. That was a huge goal for Blake and it got us going again. We need goals from our third and fourth lines. That’s what we’ve talked about and we’re going to stay on it.” — Bowness on Blake Comeau coming up with a goal against Calgary.

Don’t miss your chance to see the Stars battle the Nashville Predators in the opener of a three-game homestand at American Airlines Center on Wednesday at 7:30 p.m. Get your tickets now!

This story was not subject to the approval of the National Hockey League or Dallas Stars Hockey Club.

Mike Heika is a Senior Staff Writer for DallasStars.com and has covered the Stars since 1994. Follow him on Twitter @MikeHeika.

Blackhawks do not believe season is lost after firing Colliton, GM says