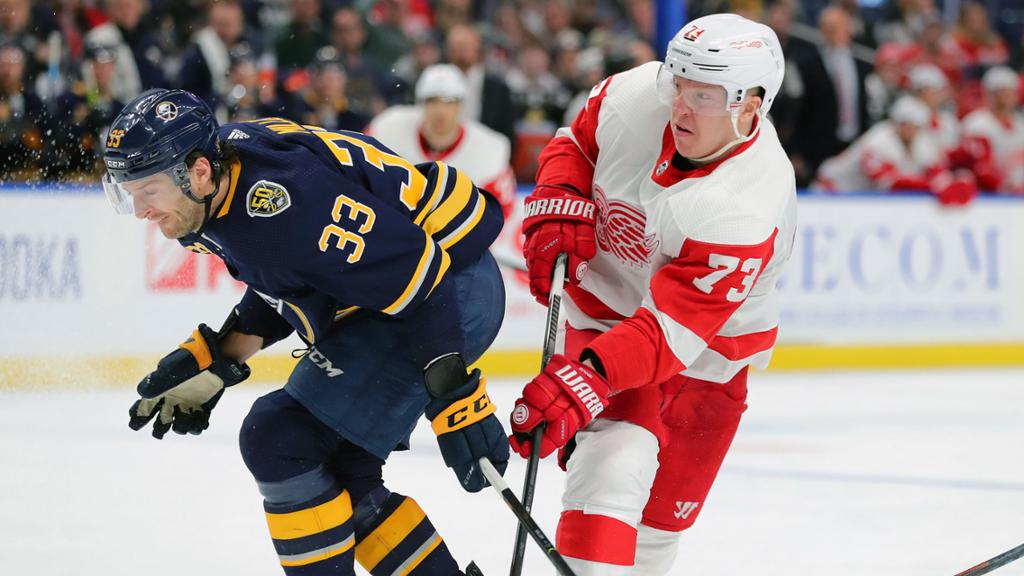 BUFFALO — A lot can change in a week in the NHL.

Last Saturday, the Detroit Red Wings were 4-2-2 with a three-game point streak, sitting just one point back of second place in the Atlantic Division. And now, after losing four straight games, the Red Wings are 4-5-2 and are in sixth place in the division.

But as tough as the last week has been, the Red Wings have proven they can compete with the best teams in the NHL–with a win against the Washington Capitals and a point against the Tampa Bay Lightning and Florida Panthers–so as quickly as things have shifted this week, one win could swing the momentum back in Detroit’s favor.

The Red Wings will attempt to begin that positive momentum swing Saturday by wrapping up a four-game road trip with a visit to the KeyBank Center to face the Buffalo Sabres.

After scoring 15 goals in a four-game span last week, Detroit has struggled offensively in its last two games, combining for just one goal against the Montreal Canadiens and Boston Bruins.

To jumpstart the offense, Red Wings coach Jeff Blashill shifted the line combinations in Friday’s practice, attempting to spark some new chemistry among his young roster.

With captain Dylan Larkin remaining out of practice Friday, Blashill moved center Pius Suter up to the top line alongside wingers Tyler Bertuzzi and Lucas Raymond.

Suter has one goal and one assist in 11 games this season, and Blashill said he hopes surrounding Suter with point producers like Raymond and Bertuzzi, who are first and second on the club with 10 points and nine points, respectively, will provide a boost.

“He’s our most experienced center right now,” Blashill said about Suter. “He did a good job last year playing with Patrick Kane and good players, and so we just thought potentially, the make of that line gives him some beef with the strength of Bertuzzi, and potentially gives the other line a little bit of beef as well.”

Suter said Detroit can’t afford to press to turn things around, and instead, the Red Wings just need to simplify their game and play within themselves.

“I think just go back to basics and remind yourself what we did before, how we won those games,” Suter said about his team’s mindset. “It goes so quick. In a week, it could be a completely different situation again. Just (need to) stick to what you know each guy can do well and don’t try to do anything too crazy.”

Buffalo comes into its first matchup against the Red Wings at 5-4-1 (11 points) this season and is in a similar situation as Detroit. The Sabres are mired in a three-game losing streak and recently wrapped up a four-game road trip of their own, returning home Saturday for the first time since Oct. 25.

Buffalo is led offensively by winger Victor Olafsson, who comes into Saturday’s game with nine points (5-4-9) in eight games. The Sabres boast a balanced offensive attack, featuring 10 players with at least five points in their first 10 games.

In goal, Buffalo has been platooning 40-year-old netminder Craig Anderson, who joined the Sabres this past offseason, with 32-year-old Dustin Tokarski. Anderson has seen a majority of the work between the pipes this season, with a 4-2-0 record in six starts, while Tokarski sports a 1-2-1 record in four appearances.

Puck drop for Saturday’s matchup against the Sabres is set for 7 p.m. Fans can catch the action on Bally Sports Detroit or the Red Wings Radio Network.