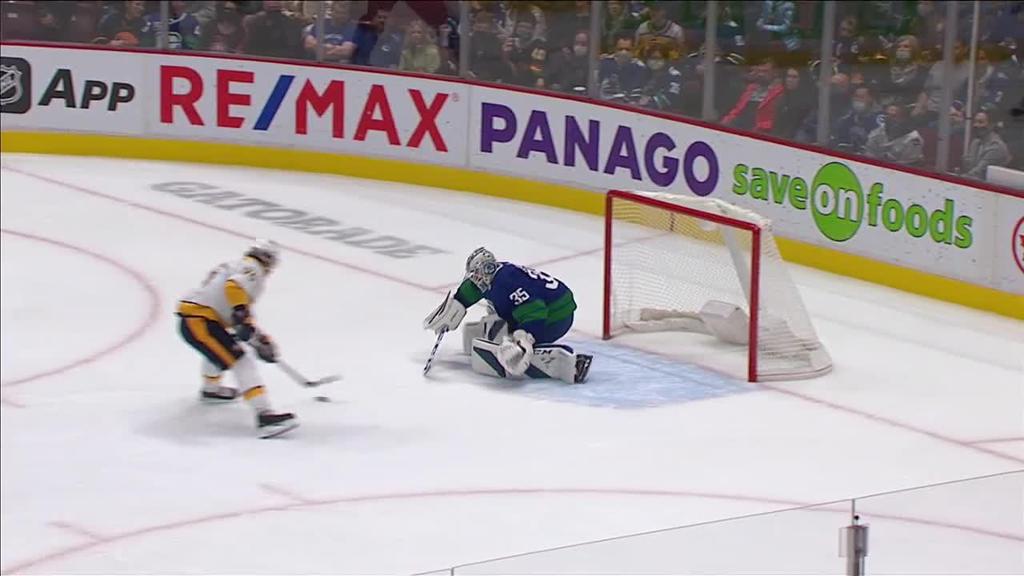 VANCOUVER — Matt Duchene scored for a third straight game, and the Nashville Predators defeated the Vancouver Canucks 3-2 at Rogers Arena on Friday.

Roman Josi and Philip Tomasino each scored a power-play goal, Mikael Granlund had two assists, and Jusse Saros made 26 saves for the Predators (6-5-0), who bounced back from a 5-2 loss at the Edmonton Oilers on Wednesday to win for the fifth time in six games.

“It wasn’t the most beautiful game but we found a way to win,” Granlund said. “Obviously we have one guy in net who keeps making these saves and keeping us in the game, so it’s a big road win for us.”

Saros made several great saves, getting his blocker on a Bo Horvat breakaway at 18:49 of the first period and stretching across to take an empty net away from Vasily Podkolzin on a backdoor pass from Elias Pettersson at 9:36 of the third.

Brock Boeser and Nils Hoglander scored, and Thatcher Demko made 25 saves for the Canucks (4-6-1), who have lost four of five during a seven-game homestand.

“We’ve got a lot of talent here, a lot of guys who can score and make plays and stuff,” Boeser said. “It’s just a matter of bearing down, accepting whatever role you’re put in and playing that role as hard as you can.”

The Canucks were 0-for-5 on the power play and are 0-for-17 the past four games.

Neither was the penalty kill.

Josi scored on a point shot on the power play past a screened Demko to put the Predators ahead 1-0 at 5:49 of the first period.

Boeser tied it 1-1 at 19:51 after a cross-ice pass put him alone at the bottom of the left face-off circle. Saros slid out at Boeser, who deked around him and tucked the puck into the empty net.

“I just knew I had time once I got the puck, and instincts just kind of took over from there,” Boeser said.

Hoglander put the Canucks ahead 2-1 with a similar goal at 10:08 of the second period, faking a shot alone in the slot then stickhandling around Saros for his first goal of the season.

Duchene tied it 2-2 on a breakaway at 12:26, getting behind the defense on a pass from Granlund and scoring with a backhand deke.

“I just think he’s come back with the right mindset this year,” Hines said. “It all came back to him playing fast, skating, being competitive. That allows his skill to come out. He’s assertive, he’s attacking at the right times.”

Tomasino put Nashville ahead 3-2 on a power play at 19:15. Luke Kunin made a cross-crease pass from the goal line on Demko’s right to Tomasino alone inside the far face-off dot, and he lifted a quick shot over the sprawling goalie.

Tomasino was stopped on a point-blank rebound 2:14 before scoring.

“I was a little frustrated about that one,” Tomasino said. “I came back to the bench and guys were just telling me to stick with it. It was nice to get one. You just want to help your team in any way you can and to score feels nice, and obviously it ended up being a pretty big goal.”

Nashville was 2-for-3 on the power play, the third straight game Vancouver has surrendered two power-play goals.

“PK has to be better, the power play has to be better, and our game’s going to be fine,” Green said. “We’ve got a couple players that probably need to play a little better. Five on five, we’ve done a lot of good things but special teams have to be better.”

NOTES: Nashville defenseman Mark Borowiecki skated Friday morning but missed a second straight game with an upper-body injury sustained Tuesday during a 3-2 overtime win at the Calgary Flames. He is day to day. … The Predators activated goalie David Rittich out of COVID-19 protocol on Thursday and sent goalie Connor Ingram to Milwaukee of the American Hockey League. Rittich has yet to play this season after signing a one-year contract July 28. … Predators forward Rocco Grimaldi played his 200th NHL game. … Canucks defenseman Travis Hamonic had an assist for his first point this season. He missed training camp and the start of the season for personal reasons.