GRAPEVINE — Anthony “Shotzzy” Cuevas-Castro and Indervir “iLLeY” Dhaliwal were running on fumes after meeting their fans and grinding Call of Duty: Vanguard Friday afternoon at the Belong Gaming Arena.

So much so that the two Dallas Empire Call of Duty League teammates got into a small argument over very serious details.

“Ant, how many energy drinks did I have?” Dhaliwal asked.

It was six or seven, Cuevas-Castro responded. Dhaliwal immediately denied that, as did the other Envy Gaming staff members there for the meet and greet at the recently opened public gaming center.

“Bro, do you want me to count?” Cuevas-Castro asked. It was a rhetorical question.

That adds up to six, counting the double espresso as two. Both Dhaliwal and Cuevas-Castro had been awake for a while to get in as many reps of the new Call of Duty title as possible.

While there hasn’t been any official confirmation yet, the rumored team of Cuevas-Castro, Dhaliwal and OpTic Gaming pros Seth “Scump” Abner and Brandon “Dashy” Otell grouped up for a search and destroy tournament Thursday night that carried into the wee hours of Friday morning.

Every moment in the new game is crucial to getting an edge.

“The little stuff that will give you an advantage and make sure you always have more knowledge,” Dhaliwal said. “You don’t want to lose a game and it has to do with them knowing more than you. That’s my pet peeve. I always want to stay ahead of the game. That’s how you know I haven’t slept.”

Cuevas-Castro, the Call of Duty League MVP in 2020 and an exhausted human after being awake since 9 a.m. Thursday, likes to figure out the “nerd stuff”, too. He’s been coined the movement god in Call of Duty. Shifty, evasive and in his opponents’ face before they can react.

Vanguard’s movement is better than Black Ops: Cold War, but it’s not perfect.

“In terms of movement, I definitely think it could be improved but it’s not bad. It doesn’t feel fluent when you are tactically sliding,” Cuevas-Castro said. “They have that delay they said they wanted to do so that you couldn’t abuse it. But, I think it makes it clunkier. It’s like they are trying to cater to the people that are noobs and movement gods.”

15 hour stream was a huge W you guys are unreal thank you for everything, now I got a meet and greet @ 3 CT who will I see there 👀

Entering their third CDL season, Dhaliwal and Cuevas-Castro have evolved as pros. They used to have to practice their signatures, but had no problem going through a line of a dozen people at Belong Arena.

While the two were running on minimal sleep, their tanks weren’t empty yet.

“I prepared for the Vanguard release and messed up my sleep schedule on purpose,” Dhaliwal said. “I woke up at (4 p.m. CT Thursday) and I have been awake since. After this, I’m probably going to stream more.” 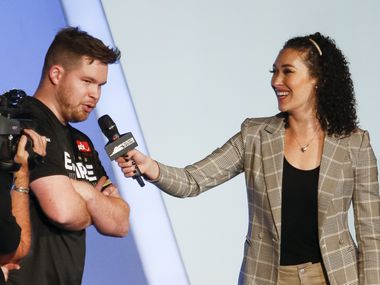 Premier “Fully Engaged” on Cyber Attack While Abroad for COP26

Call of Duty: Vanguard – How to level up fast, earn weapon XP, and rank up operators

Call Of Duty: 10 Things Only Die-Hard Fans Know About The Games

When do FIFA 22 Prime Icons Come Out?

‘Call of Duty Warzone’ is coming to mobile according to reports

Call Of Duty: 10 Things Only Die-Hard Fans Know About The…

Holiday Alexa hacks and commands to get you into the…

NHL’s Board of Governors meeting will have input from…

Real Madrid through to last 16 as group winners as Atletico…