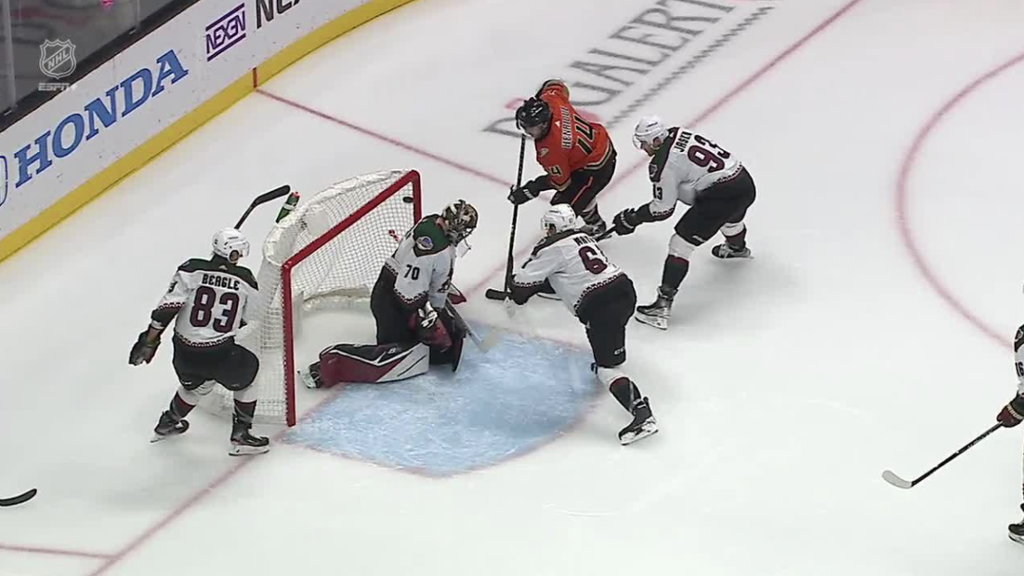 ANAHEIM — The Arizona Coyotes tied the longest winless streak to start a season in their history with a 3-1 loss to the Anaheim Ducks at Honda Center on Friday.

Anthony Stolarz, who started in place of John Gibson (illness), made 28 saves, and Adam Henrique had a goal and an assist for the Ducks (5-4-3), who have won three straight and are 3-0-2 in a five-game point streak.

“I thought we played 60 minutes tonight,” Stolarz said. “I thought we did a good job keeping their chances to the outside. They only had probably two or three quality chances from the slot. Guys were blocking shots, we were cycling in the offensive zone, and kind of any time they had any kind of momentum, we kind of killed their cycle. … We just played the right way tonight.”

Anaheim, which averaged the fewest goals in the NHL last season (2.21), has scored at least three in 10 of its 12 games.

“We’re playing in the offensive zone,” Ducks captain Ryan Getzlaf said. “We’re putting the puck in the net when we’ve got the chances.”

Shayne Gostisbehere scored, and Karel Vejmelka made 28 saves for the Coyotes.

“Mentally, we had a lack of urgency,” Tourigny said. “I understand we’re in a tough situation, but nobody will feel sorry for ourselves, so we need to show more character in our situation.”

Henrique scored 34 seconds into the game to give Anaheim a 1-0 lead. Getzlaf attempted a centering pass to Troy Terry, but the puck ricocheted off the skate of Arizona defenseman Jakob Chychrun and banked off the end boards to Henrique at the right post.

With an assist on the play, Terry extended his point streak to 10 games (seven goals, six assists).

“Troy’s playing great right now,” Getzlaf said. “He’s skating off the puck very well and we’ve developed some of that chemistry where I kind of know where he is. Obviously, he has an ability to finish, so it’s been great.”

Sonny Milano made it 2-0 at 18:13 of the first, converting on a one-timer off a quick setup down low by Henrique on the power play.

It was the 11th power-play goal of the season for the Ducks, who scored 11 with the man-advantage in 56 games last season.

Sam Carrick pushed the lead to 3-0 when he redirected a feed from Derek Grant at 9:46 of the second period.

“I felt for the first time this year we got outworked in the second period,” Tourigny said. “That’s unacceptable. That’s not who we are.”

“I don’t know if it’s growth, or what it is,” Anaheim coach Dallas Eakins said. “I will say this, we have three guys out of our top six out of the lineup, [Max Jones is] another key guy that’s out. We’re plugging and playing guys right now and with that comes opportunity. Those games against teams that haven’t won, those are dangerous games. You don’t want to be that team now.”

NOTES: Coyotes forward Phil Kessel played his 911th consecutive game to move past Patrick Marleau for fourth in NHL history. Garry Unger is third at 914. … Arizona defenseman Cam Dineen and forward Ben McCartney each made his NHL debut. Dineen had three shots and one hit in 16:50 of ice time, and McCartney had two hits and was plus-1 in 15:01. … Ducks forward Trevor Zegras was a late scratch because of an upper-body injury and is day to day. … Kevin Shattenkirk, who had the secondary assist on Milano’s goal, has scored 12 points (three goals, nine assists), which is tied for the most among NHL defensemen with Roman Josi of the Nashville Predators and Adam Fox of the New York Rangers. … Getzlaf has seven points (one goal, six assists) in a five-game point streak. … Lukas Dostal was recalled from San Diego of the American Hockey League to back up Stolarz.