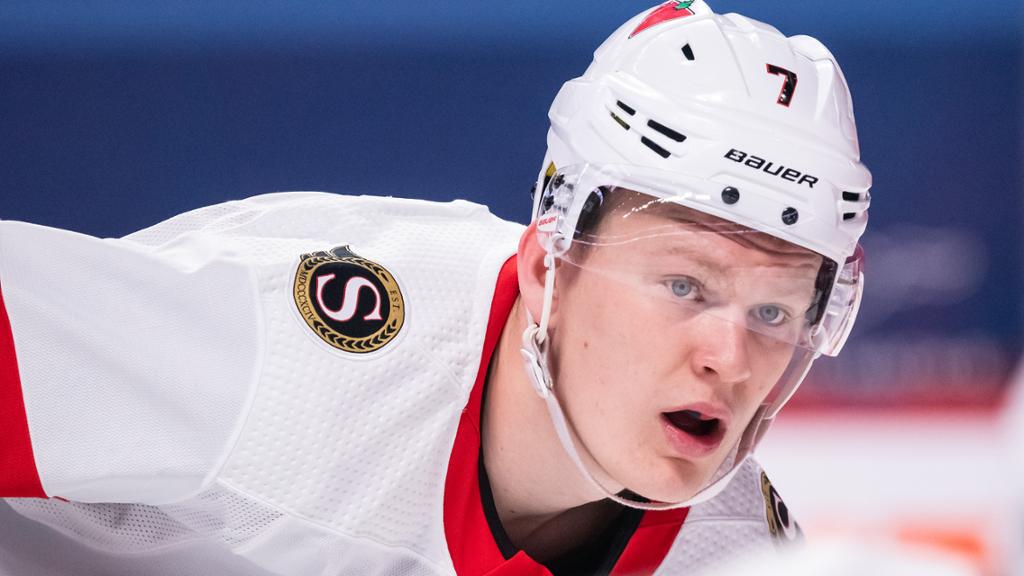 “Especially seeing the guys come before me, it was definitely a privilege,” Tkachuk said. “It’s an honor and I’m definitely excited for this opportunity. But in saying that, there’s plenty of guys in that locker room who are tremendous leaders as well. And so it’s not going to be one person. It’s still going to be that group leadership that we’ve had in the past and it’s going to continue moving forward.

“I don’t think it’s going to change who I am one bit. It’s definitely an added responsibility, but I’m still going to be the same person who comes in with a smile on my face and just happy to go to go to work with all my best buddies.”

The 22-year-old forward signed a seven-year, $57.5 million contract ($8.214 million average annual value) as a restricted free agent Oct. 14 and did not play the first three games this season. He has scored four points (two goals, two assists) in seven games.

Coach D.J. Smith said the decision was made in consultation with owner Eugene Melnyk and general manager Pierre Dorion.

“Over the last week or so, Mr. Melnyk and Pierre and myself have talked, and Mr. Melnyk was here yesterday, and after meeting with Brady, [Melnyk] was confident that he was the guy that he wants to lead his organization,” Smith said. “Myself and Pierre feel the same. There’s plenty of other guys that have captain attributes, but at the end of the day we think that Brady’s play, his demeanor, his leadership is something that can help this franchise going forward and put us on the map.”

Ottawa had not had a captain since defenseman Erik Karlsson was traded to the San Jose Sharks on Sept. 13, 2018.

Smith said the decision came down to Tkachuk or defenseman Thomas Chabot, who was named an alternate captain.

“Thomas Chabot is a guy that has all the attributes as well, and it’s not an easy choice,” Smith said. “But we feel that [Tkachuk’s] style of play, his day-to-day actions with the guys, his ability to lead with emotion will help us in the long run.”

Tkachuk was selected by the Senators with the No. 4 pick in the 2018 NHL Draft and has scored 129 points (62 goals, 67 assists) in 205 games. He led the Senators in scoring the previous two seasons, including 36 points (17 goals, 19 assists) in 56 games last season. Tkachuk was second in the NHL last season with 220 shots on goal (Toronto Maple Leafs center Auston Matthews, 222) and 248 hits (Florida Panthers defenseman Radko Gudas, 250).

“Brady personifies leadership,” Melnyk said. “While on the ice, he craves winning and commands respect. Off of it, he routinely sets a good example for his teammates and carries himself with a combination of confidence and dignity. He’s deserving of this next step in his career. We’re proud to bestow the honor of being the team’s 10th captain upon him.”

Forwards Connor Brown and Nick Paul and defenseman Nikita Zaitsev will rotate as an alternate captain with Chabot.

Five NHL teams do not have a captain: the Arizona Coyotes, Buffalo Sabres, Calgary Flames, Columbus Blue Jackets and New York Rangers. The Montreal Canadiens likely won’t have one on the ice this season after general manager Marc Bergevin said Sept. 6 that a replacement will not be named for defenseman Shea Weber, who is expected to be out the entire season because of injuries.

How Clans work in Call of Duty: Vanguard