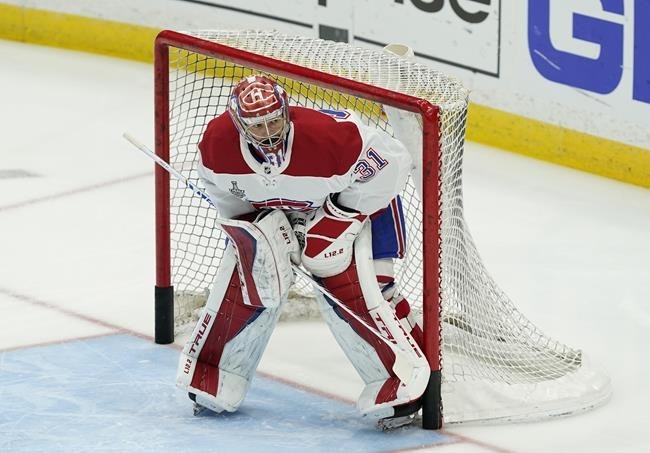 Carey Price is preparing to return to the Montreal Canadiens. Habs head coach Dominique Ducharme has confirmed that the superstar goalie will rejoin the team on Monday.

Carey Price is preparing to return to the Montreal Canadiens.

Habs head coach Dominique Ducharme has confirmed that the superstar goalie will rejoin the team on Monday.

Ducharme said on Friday that Price will meet with athletic therapists and develop a plan moving forward.

The assistance program, jointly run by the league and the NHL Players’ Association, helps players and their families with mental health, substance abuse and other matters.

No official reason was given as to why Price was entering the program, but his wife Angela cited mental health in an Instagram post when the news first broke that he would miss the start of the season.

“He’s coming off a surgery, so we’ve got to see where he’s at with that,” Ducharme said. “And then from there I think it’s gym, then on the ice by himself, then with the goalie coach, with shooters, with the team.

“So there’s a buildup for sure, and the timeline, it’s tough to go deep and really have a plan.”

Ducharme said it’s possible Price might have a conditioning stint with the American Hockey League’s Laval Rocket before returning to action with the Canadiens. Price played briefly with the Rocket late last season after recovering from a concussion.

“We’re going to take a look at everything we can do to get him ready to play,” Ducharme said.

The 34-year-old Price was instrumental in Montreal’s run to the Stanley Cup final last season, where they lost to the Tampa Bay Lightning in five games.

The Canadiens host the Vegas Golden Knights on Saturday, the Los Angeles Kings on Tuesday, and the Calgary Flames on Thursday.

This report by The Canadian Press was first published Nov. 5, 2021.

Best Settings For Call Of Duty: Vanguard On PlayStation And Xbox