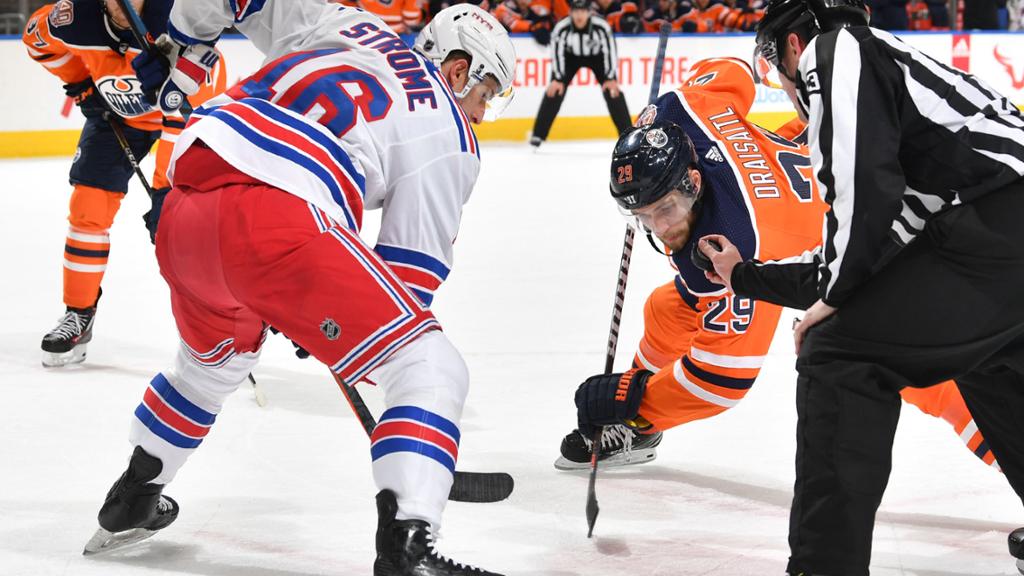 Welcome to NHL On Tap. Three NHL.com writers will share what they are most looking forward to on the schedule each day. Today, their choices from the five games Friday.

It’s no surprise six weeks into the season that Leon Draisaitl and Connor McDavid are atop the NHL scoring race for the 8-1-0 Edmonton Oilers, winners of three straight and leading the Pacific Division. But who figured the 6-2-2 New York Rangers, the Oilers’ opponent at Rogers Place (9:30 p.m. ET, SNW, MSG+, ESPN+, NHL LIVE), would be in sight of the Metropolitan Division lead, four points behind the Carolina Hurricanes? Through nine games, Draisaitl has scored 20 points (nine goals, 11 assists), one point more than McDavid (seven goals, 12 assists). The centers will be challenged by Rangers goalie Igor Shesterkin, who has been lights-out solid thus far (5-1-2, 1.85 goals-against average, .943 save percentage, one shutout). Forward Chris Kreider is easily New York’s biggest scoring threat with a team-leading seven goals in 10 games. Enjoy what must be a divided-loyalties matchup for Mark Messier, the Hall of Famer and TNT analyst who was captain on each team for their most recent Stanley Cup title — the Oilers in 1990, the Rangers in 1994. — Dave Stubbs, columnist

Blackhawks try to climb out of hole

The Chicago Blackhawks (1-8-2) won for the first time this season on Monday, a 5-1 victory against the Ottawa Senators, and were defeated 4-3 by the Carolina Hurricanes on Wednesday. It may not be a lot to build on for Chicago, which had high aspirations this season after making several offseason moves, but it’s at least a starting place. Forward Patrick Kane has scored seven points (four goals, three assists) in a three-game point streak, center Jonathan Toews has four assists in his past four games and defenseman Seth Jones has provided an offensive spark with seven assists and 22 shots on goal in his past seven games. The Blackhawks visit the Winnipeg Jets at Canada Life Centre (8 p.m. ET, TSN3, NBCSCH, ESPN+, NHL LIVE) and will try to gain ground to make up for their slow start. — Rob Reese, fantasy editor

Tune in to see Troy Terry when the Anaheim Ducks host the Arizona Coyotes at Honda Center (10 p.m. ET; ESPN+, HULU, NHL LIVE). The 24-year-old forward has scored 12 points (seven goals, five assists) during a nine-game point streak. Only one Anaheim player in the past decade has had a longer point streak: captain Ryan Getzlaf, who had one lasting 14 games in 2013-14 and an 11-game run in 2015-16. Terry already has tied his NHL career high for goals in a season, and he needs eight points to tie his NHL career high for points. — Nicholas J. Cotsonika, columnist

Last season with the Vegas Golden Knights, Marc-Andre Fleury won the Vezina Trophy, voted the best goalie in the NHL. This season with the Blackhawks, Fleury is 1-6-0 with a 3.96 GAA and .886 save percentage. If he plays against the Jets, he will face a team that is 5-0-1 in its past seven games and averaging 3.44 goals per game this season, sixth in the NHL. Forward Kyle Connor leads Winnipeg with 14 points (seven goals, seven assists).

This matchup could include two of the hottest goalies in the NHL. The Rangers have Shesterkin, but the Oilers have Mikko Koskinen, who is 6-1-0 with a 2.18 GAA and .934 save percentage. Among NHL goalies who have played more than two games, Shesterkin is tied for fourth in GAA, Koskinen 11th. Shesterkin ranks fourth in save percentage, Koskinen eighth.

After Terry and Shattenkirk, Getzlaf is next in scoring for the Ducks with 10 points (one goal, nine assists). Anaheim has not lost in regulation in its past four games (2-0-2). Arizona is the only team in the NHL without a win (0-9-1) and has scored six goals over its past seven games.

The Kings have won three in a row following a six-game losing streak (0-5-1), and forward Alex Iafallo has scored six points (three goals, three assists) during a four-game point streak. The Devils are 1-2-1 in their past four games. Defenseman Dougie Hamilton did not play the final two periods of a 4-0 loss at Anaheim on Wednesday because of a lower-body injury and did not practice Thursday. He has scored six points (two goals, four assists), tied for the New Jersey lead with forward Andreas Johnsson (four goals, two assists) and center Pavel Zacha (four goals, two assists).