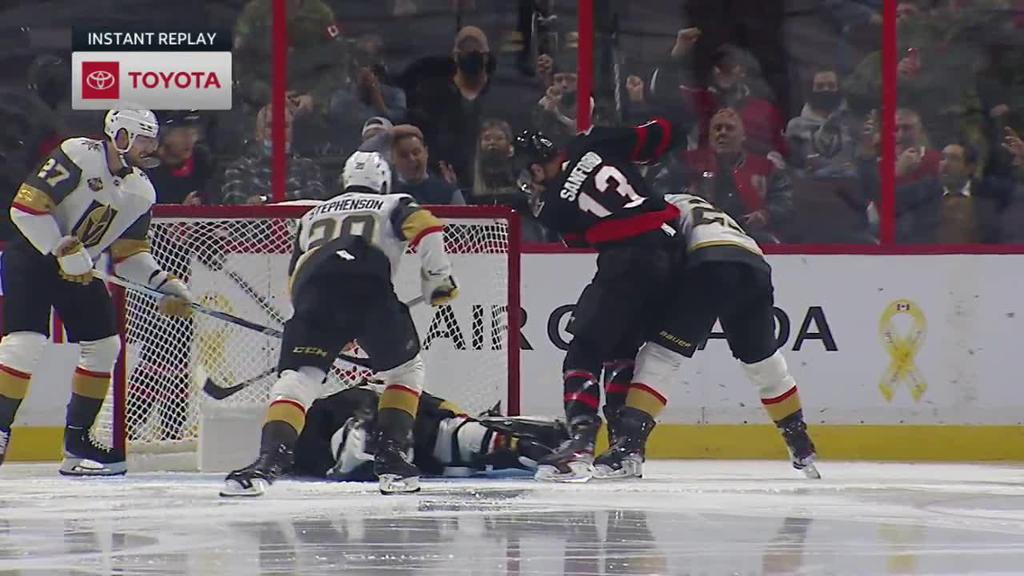 OTTAWA — Robin Lehner made 38 saves for the Vegas Golden Knights in a 5-1 win against the Ottawa Senators at Canadian Tire Centre on Thursday.

“We needed him the most in the first period or that game could have gone sideways quickly,” Vegas coach Pete DeBoer said of Lehner, who made 16 saves in the first. “It’s a different game if you’re chasing all night. He was our best player in the first and that allowed us to kind of get our feet under us and I really liked our second period and our third period.”

Video: VGK@OTT: Marchessault swats in a backhander in front

“You get attached to guys, you work with them, and they’re two really good people,” DeBoer said of Krebs and Tuch. “But, I mean, we’ve got Jack Eichel coming. You remind yourself how good that’s going to look when he’s back and healthy and part of our lineup.”

Brady Tkachuk scored, and Filip Gustavsson made 34 saves for the Senators (3-6-1), who have lost three in a row.

“We just didn’t do the little things good enough,” Tkachuk said. “The little details on the forecheck. The way we want to play is we’re a fast, physical team, and we kind of slowed the game down and made life tough on ourselves. So, we’re going to take this opportunity to learn, but we just can’t make those mistakes again.”

Video: VGK@OTT: Tkachuk tips a shot into the back of the net

William Carrier‘s off-speed shot snuck through Gustavsson’s five-hole to give the Golden Knights a 1-0 lead at 4:31 of the second period.

Brett Howden chipped in a centering pass from Shea Theodore for his first goal with the Golden Knights to make it 2-0 at 11:21.

“Right now I’m pretty happy,” Marchessault said. “But I have a bigger goal than just 300 points. My goal is the Stanley Cup. So I’m going to keep working towards that goal every day.”

“We got all kinds of chances,” Senators coach D.J. Smith said. “If you’re playing a weaker goalie tonight we probably score five, but you can’t give up five. The chances against are blatant mistakes.”

Alex Pietrangelo‘s point shot deflected in off an Ottawa stick to make it 4-1 at 14:01 of the third.

Marchessault scored his second of the game into an empty net to make it 5-1 at 17:10.

Lehner is 9-0-3 against the Senators, his first NHL team.

“Battling through some adversity as a group, we’ve just got to stay in games,” Lehner said. “And that’s the goalie, the [defense] and everyone. We’ve just got to battle and try to keep it as close as possible until we kind of get a goal, or at least get to the third period with close games.”

Video: Marchessault nets 2 goals in a 5-1 win over Senators