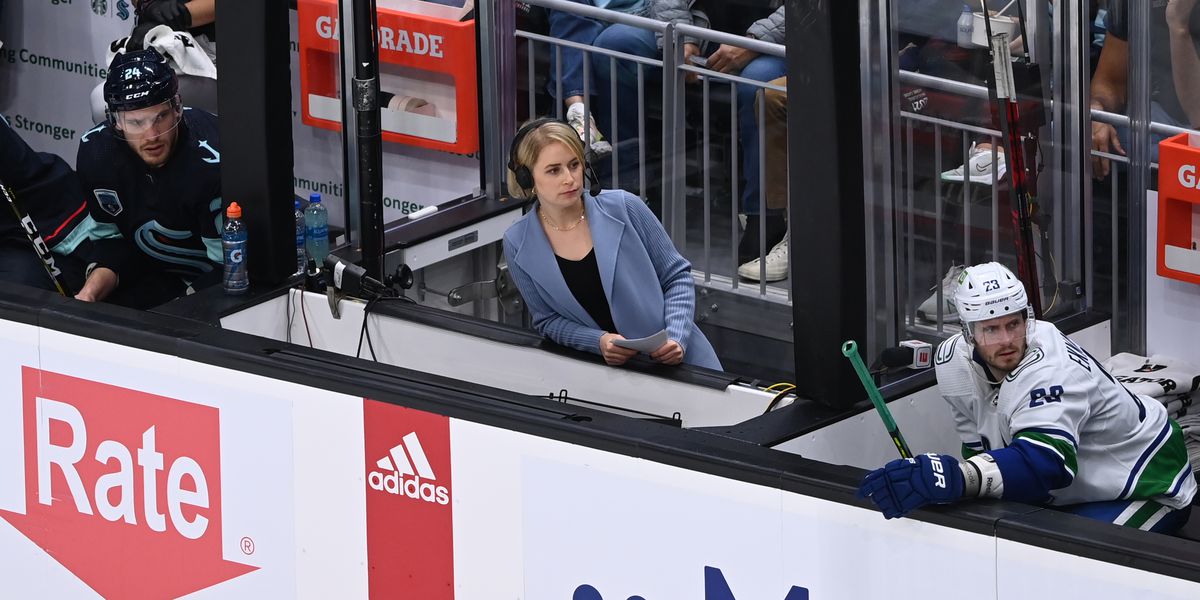 The referees were concerned when they saw who was inhabiting the space between the players’ benches in the NHL’s season opener last month. ESPN was airing the game between the host Lightning and Penguins, and the network had put reporter Emily Kaplan in the middle of the action.

“Someone from the NHL came up to me and was like, ‘The refs were all asking about you,’ ” Kaplan said. “ ‘Who’s that girl between the benches? Is she gonna be OK? Does she need a helmet?’ ”

Kaplan, 30, knows to keep her head on a swivel to avoid the pucks, sticks and bodies that could crash into her little world at any moment. But she chalks those up as merely occupational hazards in her new role in ESPN’s NHL coverage.

“I keep telling people, ‘I want a black eye because I think that would give me credibility,’ ” she said. “Most hockey players tell you, ‘No, trust me, you don’t. It hurts a lot.’ ”

Kaplan already has enough credibility in NHL circles, having covered the league for ESPN.com since 2017. But the network expanded her job description significantly since picking up the league’s broadcast rights this year. In addition to in-the-glass reporting, Kaplan appears on ESPN’s hockey studio shows and co-hosts a podcast with Linda Cohn.

“She is the model on-air reporter where she is touching all platforms,” said ESPN senior vice president Mark Gross, who oversees NHL game production.

When the NHL returns to ABC for the first time since 2004 with the Blues-Blackhawks game Nov. 26 at the United Center, Kaplan will be back in her little world.

“It’s such a cool way to take in a game,” said Kaplan, a Montclair, New Jersey, native who has lived in Chicago’s Ukrainian Village since 2016. “The chirping that I overhear, I find myself cracking up because guys are just hilarious. You get to see the way they interact with each other on the bench.”

Kaplan never played hockey, but she has a love for the game that dates to her childhood, when she watched Rangers games with her dad. Dave Kaplan was the Sunday sports editor at the New York Daily News. So she not only took to hockey, she took to sportswriting.

One of her dad’s friends was then-Sports Illustrated NFL writer Peter King, who also lived in Montclair. When Kaplan was in high school, King took her to see the New Jersey Jackals, a nearby independent-league baseball team. He arranged with the public-relations director to meet with the manager and a player after the game.

“I talked to Emily about some of the things you have to talk about and everything,” King said. “She needed no advice. She needed no help. She just took over. She commandeered the interview. And then I had her write a story on deadline about it, and it had zero errors. It was really good for a kid who was in high school.”

Kaplan went to Penn State because it offered a sports journalism major. She interned at Sports Illustrated, then worked there after college. She graduated in 2013, just before King launched his football website, the MMQB, at SI. He brought her aboard.

“One of the underrated things about our business is, If you’re not curious, you’re not gonna make it,” King said. “And Emily was extremely curious, and she was a worked bee. If you have those two things, all the other things can come into place.”

Kaplan made a name for herself in NFL circles, but she knew she was at the wrong end of the MMQB depth chart. ESPN called her about a job covering football, and she went in for an interview. Kaplan thinks she mentioned hockey several times because when ESPN called her back a few weeks later, the football job had fallen through but a hockey job suddenly was on the table.

“They said, ‘This is our biggest need right now. You can be one of two people covering hockey for us,’ ” Kaplan said. “I thought it was an opportunity. Although the NHL is much smaller in stature than the NFL in this country, I saw it as an opportunity to own a beat, to really challenge myself in that way. And again, it was a sport I grew up loving. It made sense to me.”

She dove into the job, spending the first couple of months on the phone, introducing herself to general managers, coaches, agents, PR people, practically everyone in the NHL media directory. She went to the United Center on game days for morning skates to meet with visiting teams. She had some frustration with stories’ limited attention because ESPN wasn’t a rights holder, but those days are over.

“She’s picked it up quite quickly from the get-go with our first game down in Tampa,” Gross said of Kaplan’s adjustment to TV. “If you’re secure in your knowledge, then you’re just talking to the camera and not staring into the lights. Emily has a great feel for just having a conversation and not trying to be the stereotypical broadcaster.”

Kaplan credits her smooth transition to appearing on “Around the Horn.” She debuted in May 2019, but not after putting it off for a few weeks out of terror. The producer eventually convinced her to just jump in and roll with it. The show’s required brevity has taught her to pare down her words, which helped prepare her for in-game reporting.

But Kaplan also wants to tell the stories of hockey. She believes the players’ inherent preference to keep those to themselves holds the sport back.

“I’ve always had this belief that hockey players are just fantastic people with incredible stories but they never want to put themselves out there and share,” Kaplan said. “It’s kind of been my mission to get guys to open up and share stories about the game.”