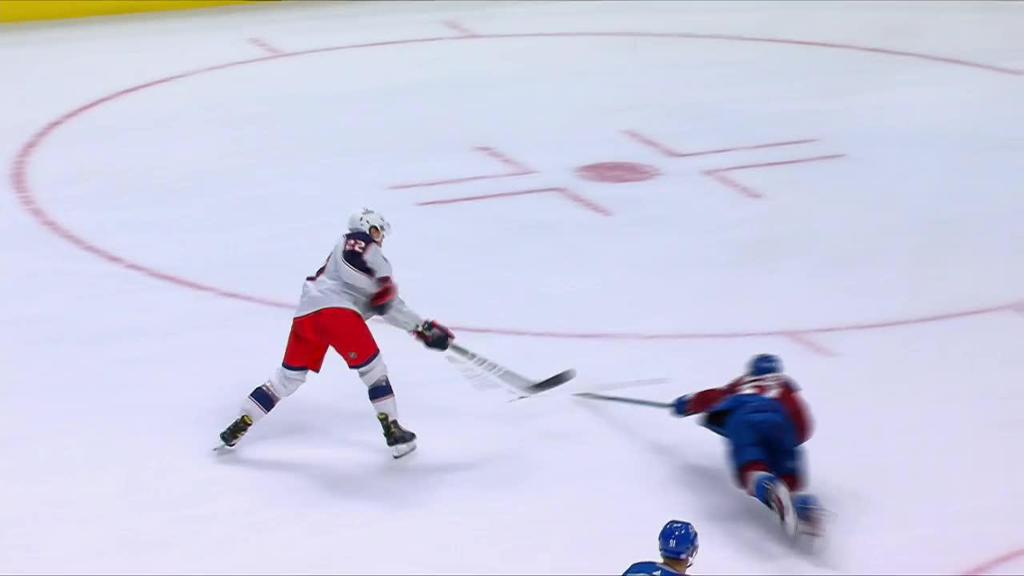 Jake Bean scored his second goal of the game at 1:12 of overtime to give the Columbus Blue Jackets a 5-4 win against the Colorado Avalanche at Ball Arena in Denver on Wednesday.

Cole Sillinger also had two goals for the Blue Jackets (6-3-0), who scored four straight to take a 4-2 lead in the third period. Jakub Voracek, Oliver Bjorkstrand and Patrik Laine each had two assists, and Joonas Korpisalo made 28 saves.

Bean won it with a wrist shot from between the circles after a pass from Voracek.

“My guy kind of came off me, and there’s 100 percent chance he’s going go to pass it to me every single time,” Bean said. “It was a good play by [Voracek] and it was nice to finish it off.”

Nazem Kadri had three assists for Colorado, and Jonas Johansson made 32 saves.

“It’s great to score goals, but at the end of the day you want to win hockey games,” Byram said. “We were lucky to get a point out of that one. You never want to be in that position late on the third period. You’re not going to score two goals with two minutes left every game.”

Sillinger scored twice in the first 4:26 of the third period to give Columbus a 3-2 lead. He tied it 2-2 at 1:13 on a pass from the right corner by Voracek, then made it 3-2 with a redirect of a Gabriel Carlsson pass.

Boone Jenner followed his own rebound at 8:56 of the third to give the Blue Jackets a 4-2 lead.

“If you go back and look at all the goals we gave up, I don’t like any of them. They were all preventable,” Avalanche coach Jared Bednar said.

Logan O’Connor scored his first goal of the season 32 seconds into the second period to give Colorado a 1-0 lead.

Bean made it 2-1 at 16:55 of the second with a wrist shot from the right circle that went off the skate of Avalanche defenseman Erik Johnson.

“Sometimes you go into the third period down 2-0, you feel like you can’t score,” Bean said. “Just getting one, you know you can get two. Just having that belief instilled in the guys we took advantage of it.”

NOTES: Laine did not play the final 7:57 of the third period and overtime following a collision with Byram. Blue Jackets coach Brad Larsen did not have an update. … Avalanche forward Martin Kaut left after his last shift at 6:01 of the second period with an undisclosed injury. There was no update. … Sillinger became the third 18-year-old in Blue Jackets history to have a three-point game, joining Rick Nash (18 years, 211 days) and Nikita Filatov (18 years, 230 days). … Columbus defenseman Adam Boqvist (lower body) missed his third game in a row. … Blue Jackets defenseman Gavin Bayreuther made his season debut. He had two blocked shots and was plus-2 in 19:29 of ice time. … Colorado defenseman Cale Makar (upper body) and Andre Burakovsky (undisclosed) did not play, and forward Mikko Rantanen (lower body) missed his third straight game. … Avalanche forward Kiefer Sherwood, a Columbus native, also made his season debut. He had one shot on goal in 12:36. … Avalanche defenseman Jacob MacDonald was used as a forward for a third straight game because of injuries.