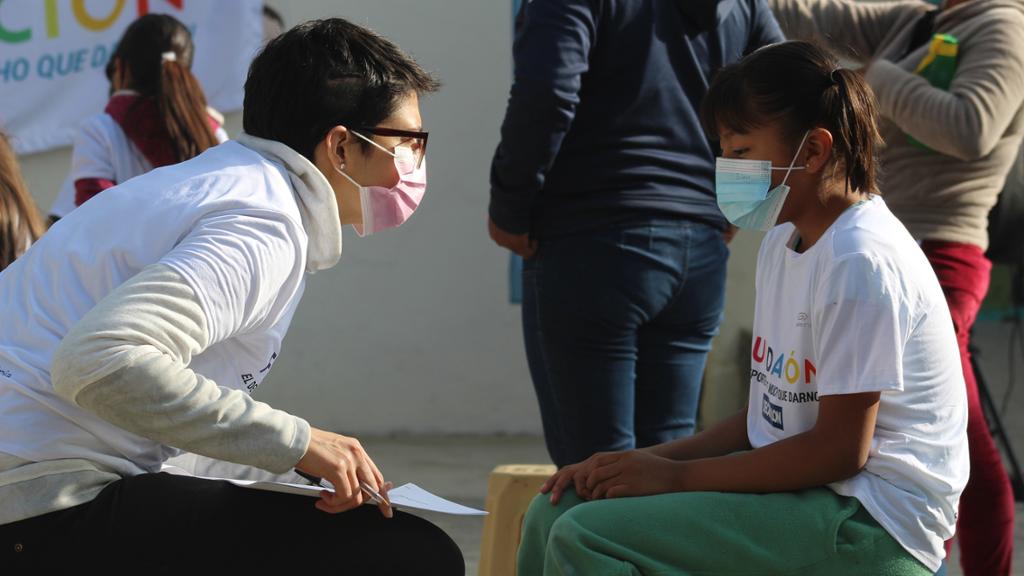 Brenda Moller has dedicated her career to “Dale la Vuelta.”

Translation: “Turn it around,” find a way make it work no matter the situation.

Growing up and living in Mexico City has presented personal challenges for the founder and CEO of Dale Vuelta, a purpose-driven company turning her motto into achievement. The 34-year-old graduated from the European Sports Business School in Valencia, Spain, with a master’s degree in Strategic Design and Innovation and International Sports Management. She didn’t do all that just to become a spectator.

Her dream is every girl and woman in Mexico and around the world having access to play sports under equal conditions. The journey has taken her to the NHL for its seventh year as a host organization for the U.S. Department of State Global Sports Mentoring Program, a collaboration between the state department, University of Tennessee and espnW to empower women and girls through sports.

Moller’s collaboration with Cecilia Vales Villazon, a college friend, 2015 delegate and founder and executive director of She Wins in Mexico City, caught the program’s attention. Her entering therapy about two years ago started a learning process of self-awareness and recognizing certain privileges in one’s life.

“I was never secure enough in myself to start something around sport despite the fact that I love sports. I’ve always loved them,” Moller said. “Through that therapy process, I got motivated to start something. I didn’t know what that something was going to be at that instance.”

A lockdown caused by the COVID-19 pandemic led Moller to create a social page. Her audience grew quickly with an interest on why women were forbidden to play and that led to an investigation of the lack of support in Mexico beyond cultural and social factors. Dale Vuelta became a resource with about 60 percent of Mexican women and girls physically inactive because of limited safe and accessible facilities.

The pandemic provided a silver lining unique to the mentoring program. Moller is participating virtually this season and will work out of NHL headquarters in New York in 2022.

“My main objective is to draft a clear road map with clear steppingstones for my project,” she said, “so that next year, I can share the advances and maybe move forward with it. I’ve been having conversations with people from different areas, specifically the social content analytics and sustainability team, and those have been very, very nurturing conversations.”

Prior conversations helped bring hockey to the Hispanic community, an endeavor that reached new heights with Kraft Hockeyville USA 2020 in El Paso, Texas, located across the Rio Grande from Ciudad Juarez, Mexico, and a Hispanic population of nearly 82 percent, according to 2020 U.S. Census figures. The El Paso County Events Center received $150,000 in upgrades and $10,000 in equipment from the NHL Players’ Association Goals & Dreams fund for being voted winner of Hockeyville USA, and hosted a preseason game one year in the making because of the pandemic, a 6-3 win by the Dallas Stars against the Arizona Coyotes before 1,200 fans on Oct. 3.

The biggest sign of progress was a long line of girls waiting to participate in Learn to Play sessions hosted by the Stars and Coyotes. There weren’t enough girls to form a separate team when the El Paso Hockey Association started in 2006.

Hockey is growing in Mexico, where the Stars, Coyotes, Los Angeles Kings and Anaheim Ducks each view as part of their territory. The Kings will host their second youth hockey camp for players ages 6-16 in Mexico City on Nov. 12-14, concluding with a scrimmage at Pista de Hielo Santa Fe. The hope is Hockeyville El Paso leads to a game in Mexico, something the NHL and the Mexico Ice Hockey Federation are discussing with hopes of making it a reality in a year or two.

“That has been one of the most intriguing conversations I’ve had for the past two weeks,” Moller said. “I started hearing all these stories, all the possibilities in the market, and that only inspires me because I dream of the day where in my country, I can get access to top class games from top leagues like the NHL.”

Doors once slammed shut are being opened. Mexico has been a member of the International Ice Hockey Federation since 1985 with more than 3,000 registered players and 22 indoor rinks, according to the IIHF, and about nine years ago poured more resources into women’s hockey with the goal of having a team in the Olympics. Though the national team failed to qualify for the 2022 Beijing Olympics, losing 8-1 to Poland and 7-1 to the Netherlands after a 6-1 win against Turkey, it was a symbol of substantial progress.

The ongoing challenge is creating new perceptions and continuing the progress made. The line “You play ball like a girl” from the 1993 film “The Sandlot” has morphed into “Fight Like a Girl” popularized by MMA legend Ronda Rousey when she was the first woman to be inducted into the UFC Hall of Fame. Amy Trask, former CEO of the Oakland Raiders wrote a book, “You Negotiate Like a Girl: Reflections on a Career in the National Football League.”

“You need to understand (the women’s game) and stop comparing (to the men’s game) because I think that’s a crucial part to transitioning fans that are fans of the men’s game,” Moller said. “We need to make them understand that they’re not the same. There’s different games and they need to appreciate them by their nature … just the pure essence of the game.”