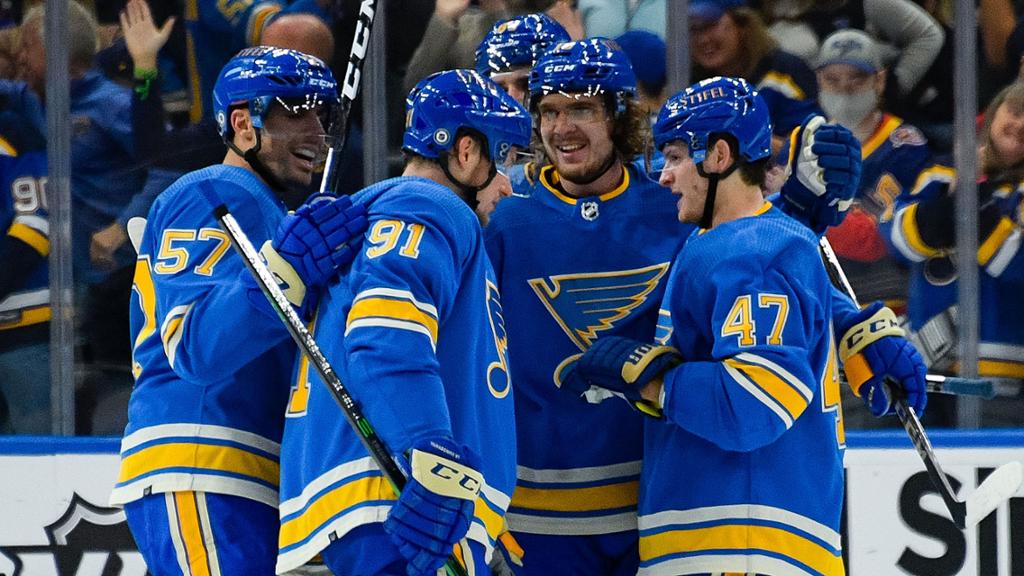 As much time hockey games spend at full-strength at 5-on-5, some of the most crucial minutes in any game are when a team is up or down a skater.

This season, the St. Louis Blues have capitalized on these minutes, which has been a key factor in driving their hot start to the season.

Heading into the Nov. 3 game at Los Angeles, the Blues are second in the NHL in power-play percentage, scoring on 35 percent of their extra-strength opportunities. With injuries and other absences bringing some variation into the lineups, the main five-man group has largely consisted of the top core of Blues goal scorers and playmakers: David Perron, Ryan O’Reilly, Vladimir Tarasenko, Brayden Schenn and Torey Krug.

“A lot of those guys have been together for a while,” said Blues Head Coach Craig Berube. “…They’ve got chemistry, they know what they’re doing, they work [the puck] around and they try different things.”

The power-play unit scored three goals in the Oct. 23 game vs. Los Angeles alone (two from Perron and one from O’Reilly), with a fourth power-play goal coming from James Neal playing on the second unit. Having multiple strong five-skater power-play units is crucial to keeping the attack strong and wearing out the shorthanded defense.

Chemistry and consistency are difficult to maintain with lineup changes and absences, yet as players like Brandon Saad and O’Reilly have had to miss time, the special teams play remains a focus. The Blues’ lone goal in the Oct. 30 shutout vs. Chicago came on a power play, a shot from Krug while playing in a unit with Tarasenko, Perron, Pavel Buchnevich and Thomas.

Video: CHI@STL: Krug opens the scoring with a PPG

Given the firepower the Blues play with while a man up, they need to make sure things don’t break the other way while a man down, and so far, the penalty kill efforts have been just as effective.

The Blues also rank second (tied with Edmonton) in the NHL on the penalty kill, with just under nine percent of shorthanded chances resulting in opposing goals (a total of 21 kills in 23 opponent power-play opportunities).

Defensemen like Faulk, Marco Scandella and Colton Parayko work hard to clear the puck and disrupt the extra-strength opponents from making plays and taking shots. Not without adequate testing either, as the Blues rank in the Top 10 in most time spent shorthanded per game.

Turning the momentum against the offense, Barbashev has also scored a shorthanded goal during the 7-3 Kings win. His is one of just 13 in the League this season.

“I’ve always loved the PK, I’ve always had a passion for it. I was excited to get the opportunity this year and it’s just up to me to prove I belong out there,” Thomas said. “It obviously starts with (Jordan Binnington) and our D have done a great job in front of the net, so that makes it easier on us forwards.”

As the young season continues to develop, having reliable special teams units can be the difference-makers in close games, already showing to be a powerful factor early on

If the current trend continues, with chemistry building and on-ice relationships developing, the Blues should have little to worry about in these crucial minutes.