NHL Buzz: Larkin away from Red Wings for personal reasons 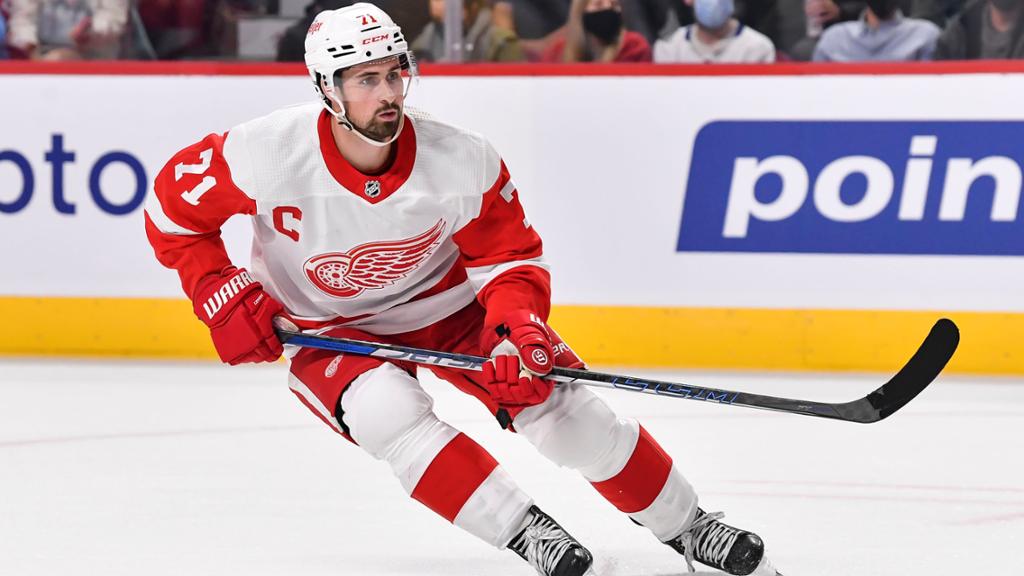 Dylan Larkin is away from the Red Wings for personal reasons and will not play at the Montreal Canadiens on Tuesday (7 p.m. ET: TSN2, RDS, BSDET+, ESPN+, NHL LIVE).

Red Wings coach Jeff Blashill did not say whether the forward will be available against the Boston Bruins on Thursday.

“I’m not going to comment on that any further than I did,” Blashill said. “We’ll take everything, like we do with everything else, day by day.”

Detroit’s captain did not practice Monday because of what Blashill said was a maintenance day. Larkin has scored eight points (three goals, five assists) in eight games this season.

“He didn’t practice today,” Blashill said. “I’ll leave it at that.”

Timo Meier was placed in NHL COVID-19 protocol for the Sharks.

San Jose was without eight players and coach Bob Boughner for a 2-1 overtime win against the Winnipeg Jets on Saturday. Seven of the eight were in COVID-19 protocol; forward Logan Couture had a non-COVID illness

Mark Scheifele practiced with the Jets on Monday for the first time since entering NHL COVID-19 protocol Oct. 21. He was the center on a line with Adam Lowry and Blake Wheeler.

Scheifele has two assists in two games. He said he tested positive the morning of Oct. 20 and negative at night, and then positive the next morning.

“From talking to the trainers, they gave me info that I was teetering on the edge of being negative in terms of like the viral count, but it wouldn’t get past that line,” Scheifele said. “I got told when we landed back in Winnipeg that night at like 1:30 (a.m.). I was like, ‘Jeez, what’s going on, I’ve got to go downstairs and sleep in the basement.’ The next day I get a negative, so I’m like, ‘OK, 100 percent it’s a false positive.’

“Then the next day I had to go get tested in the morning and then I get told right before I’m going down for my pregame nap, I was positive … and obviously it was positives from there. It was weird. It was one of those things you’ve never gone through, but [we’ve] experienced a lot this year so far.”

The Jets are 4-0-2 in their past six games. Wheeler played 18:21 of a 2-1 overtime loss at the San Jose Sharks on Saturday, his first game since entering protocol Oct. 18. — Jon Lane

Ryan Ellis is week to week with a lower-body injury, and the defenseman will not play against the Arizona Coyotes on Tuesday (7 p.m. ET; NBCSP, BSAZ+, ESPN+, NHL LIVE).

Ellis skated before practice Monday but will miss his fifth straight game.

“It’s taking a little bit longer to heal than he expected,” Vigneault said. “When Ryan’s ready to play, he’ll let us know because obviously he wants to play and help his teammates.”

Vigneault said Ellis’ availability for games at the Pittsburgh Penguins on Thursday and at the Washington Capitals on Saturday would be determined by Wednesday.

“We’re going to practice on Wednesday,” Vigneault said. “If he’s not practicing full-go with the team, then he’s not coming on the trip.”

Vigneault said forward Kevin Hayes, who also skated Monday but has not played this season because of abdominal surgery Sept. 21, could soon return to practice.

Hayes is on long-term injured reserve and eligible to be activated after Philadelphia plays its 10th game (Washington on Saturday). — Adam Kimelman

Kris Letang skated on his own Monday and could practice Wednesday after being cleared from NHL COVID-19 protocol.

The defenseman, who experienced symptoms after testing positive, has missed four games since entering protocol Oct. 23. Letang had his final cardiac screening Monday and will skate on his own again Tuesday, a scheduled day off for the Penguins.

Pittsburgh host the Philadelphia Flyers on Thursday. Letang’s status for that game has not been determined.

“The symptomatic guys, everybody’s a little bit different, so it’s hard to anticipate how long it’s going to take to get him back in the lineup,” Penguins coach Mike Sullivan said. “Hopefully, we can get [Letang] on the ice tomorrow and then he can join the team on Wednesday. We’ll see where he is at that point.”

Defensemen Marcus Pettersson and Chad Ruhwedel entered protocol Sunday. Pettersson has shown some signs of symptoms and Ruhwedel has not, Sullivan said.

Defensemen Pierre-Olivier Joseph was recalled from Wilkes-Barre/Scranton of the American Hockey League on Sunday. He skated on a pair with John Marino on Monday.

The Penguins are also without forwards Evgeni Malkin and Bryan Rust. Malkin, normally the second-line center, is expected to be out until at least December after having knee surgery June 4; Rust, usually the first-line right wing, is week to week with a lower-body injury.

Malkin and Rust skated together before practice Monday. — Wes Crosby