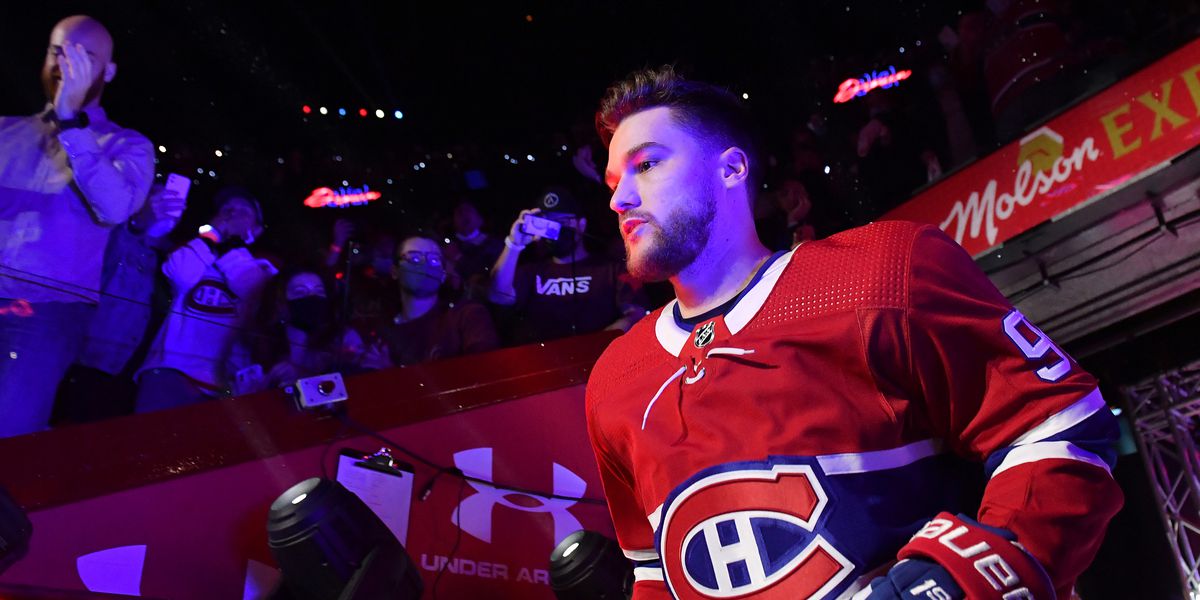 Ahead of a game on April 23, 2021, Jonathan Drouin knew he wouldn’t be able to help his team win that night. He told the Montreal Canadiens’ training staff that he hadn’t slept for days, and took himself off the ice. He didn’t play another regular-season game, and was out for the entirety of the team’s run to the Stanley Cup Final. He sat down for an interview ahead of the new season to discuss his struggles with and recovery from anxiety, sharing his story and letting everyone know he was feeling better and ready to play.

He received a round of applause when he played in front of fans again for the first time in the team’s Red vs. White Scrimmage, and had an even louder ovation when he was introduced before Montreal’s home-opener.

He responded by scoring that game’s only goal, after getting the first goal of the season a couple of games earlier in Toronto.

On a team that is having serious issues scoring goals, Drouin has been a consistent producer through 10 games so far, never going more than a game without a point. He currently leads the team with seven points, and paces them in even-strength offence as well.

His line with Christian Dvorak and Josh Anderson looked strong right out of the gate in training camp, and they’ve maintained their chemistry throughout the opening month of the season, the only partnership that remained intact.

He didn’t need to be the top scorer on the team to be a success story for his recovery from debilitating mental illness and the courage he showed in talking about it; his return to becoming a regular NHL player was enough to achieve that. The fact that he’s contributing at this level is really a bonus for the team, and it’s great to see him putting his various skills together.

Drouin’s linemates are also worthy of praise, but one of the more pleasantly surprising performances was that of Mathieu Perreault. He looked like a redundant addition on the wing ahead of the season, but the coaching staff decided to shift him back into the centre role he had played earlier in his career. He filled a spot in Montreal’s fractured centre depth, seeing time on the third and fourth lines so far. He leads the team’s forwards in high-danger-chances-for percentage (56.3%). and scored a natural hat trick on October 23, the only Habs player with a multi-goal game. Unfortunately, he’s now out of the lineup after sustaining an eye injury.

Hoffman ended the month with a goal in four of his last five games, two of them coming on what had been an anemic power play without him. Will his offence help get the team’s fortunes turned around in November?

While all eyes were on Ryan Poehling to start the AHL season, an early injury knocked him out of the lineup. Luckily for Laval, Laurent Dauphin was there to pick up the slack. In the eight games Dauphin played in October, he scored six goals and added two assists.

That kind of goal-scoring pace has Dauphin sitting second in the AHL goals category right now, just one behind Kieffer Sherwood of the Colorado Eagles. While the Rocket aren’t dominating the division like they did last year, they’re doing well to pump out the offence, and Dauphin is a huge part of that

His impact is especially felt on the power play, but it’s not the only situation in which Dauphin is shining. He’s putting himself in the right spots to take advantage of any kind of opponent misstep, a fully involved player at both ends of the ice.

The newly recalled Pezzetta has been on quite a roller-coaster since signing a contract extension in the off-season. He won the hearts of fans in the NHL pre-season with some spirited fights, hits, and a few goals. Once back in Laval, he established an incredible early-season production rate, tallying six points in eight games, which put him on pace to crush his career high of 10 points.

We’ll now see what sort of game he has at the NHL level, but we can certainly expect hits, agitation, and maximum effort from the long-haired forward.

Poehling did return to the lineup in time for two games against the Rochester Americans last week. He collected four points and looked like he hadn’t missed a beat while out injured. He’s also likely to gain an elite goal-scoring winger in Cole Caufield for the upcoming games, so it wouldn’t be surprising to see a massive month of November from the centreman.

A fifth-round pick in the recent NHL draft, Roy really made an impression in training camp with his work ethic and some great goals. He’s carried that play right into his season, with 19 points in 11 games, leading a good Sherbrooke Phoenix team in scoring, and ranking third in the QMJHL. He’s already produced more points than he did in 20 games with the club after a trade last season.

There were some concerns that his offence was only coming from a great shot, especially on the power play because his limited mobility prevented him from being a playmaker and even-strength contributor. It’s true that four of his seven goals have some on the man advantage, but he’s also already one assist shy of his total from a (shortened) 2020-21 season.

Roy is the youngest players in the Canadiens organization, celebrating his 18th birthday less than three months ago. He is emerging as one of the franchise’s most exciting prospects. and has plenty of time to work on his weaknesses and perfect his offensive talents before he begins his professional career.

Any concerns about Farrell needing a bit of time to adjust from the USHL to the NCAA level were put to bed with his series of games on the weekend. He had one goal and two assists in his debut with Harvard University on Saturday, and followed that up with two goals and another two asissts on Saturday. He’s second on the team in points, and there’s no telling just how many he’ll end up with at the conclusion of the ECAC season.

The goalie was a huge question mark going into the season, especially considering he would play for a team many expected to be at the bottom of Sweden’s second division. However, Dichow has been a huge part of the team’s success as it resides in eighth place in the standings.

Over the month of October, Dichow had three wins and holds a .900 save percentage. While his goals-against average looks quite bad, it all results from playing the top teams in the league (MoDo and Björklöven) when quite a few shots went in.

Down the stretch, ‘The Gnome’ has had his best performances, while also getting the wins. The Danish goalie looks calm, and has quite a bit of confidence. The temperament that was visible in the U20s over a year ago is gone, and he seems to have matured during the past year.

Kostenko is in Russia’s U20’s camp for the last tournament before the WJC. It will be a good indication for the Montreal prospect if he can make the team for the tournament coming up in Ängelholm, Sweden in mid-November.

EOTP Players of the Month archive

Unai Emery set for Newcastle job this week after roles with Arsenal, Sevilla and Villarreal – reports