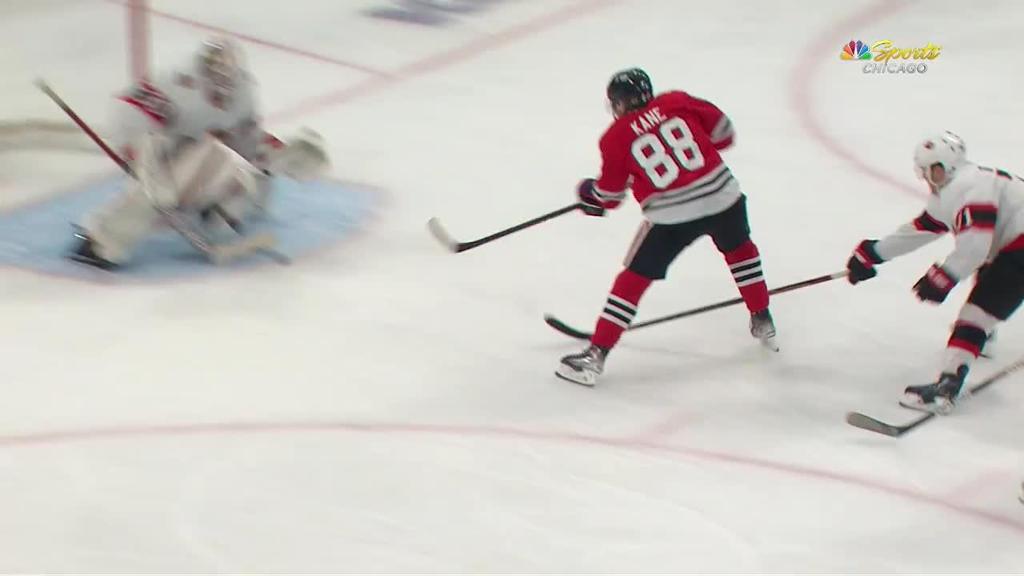 CHICAGO — The Chicago Blackhawks won for the first time this season when Patrick Kane scored a hat trick in a 5-1 victory against the Ottawa Senators at United Center on Monday.

Brandon Hagel scored two goals, and Jonathan Toews had three assists for the Blackhawks (1-7-2), who set their record for most consecutive games without a win to begin a season (nine) in a 1-0 loss at the St. Louis Blues on Saturday.

“Feeling good,” Kane said. “Had a bit of symptoms to start my time out, but after a couple of days, I felt pretty good. Because I had symptoms and the rules and protocol, I had to be out 10 days. That was the situation, but (I) felt good for the most part through all of it.

“There’s obviously been a lot going on, and even though I wasn’t with the team the past 10 days, you could feel not having a win weighing on us. It’s just huge to get the first one. Now we kind of got the monkey off our back.”

Alex Formenton scored, and Matt Murray made 26 saves for the Senators (3-5-0), who were 0-for-4 on the power play and lost for the fourth time in five games.

“Too many passengers,” Ottawa coach D.J. Smith said. “We didn’t have good legs, for whatever reason. We weren’t sharp, and you could just see it from our first power play. We had great looks and just didn’t make the plays. Then they scored and we got a little frustrated. We worked uphill all night. Give them credit. Kane came to play tonight, and he took us apart.”

Marc-Andre Fleury made 29 saves for Chicago, including 13 in the first period.

“It’s more a big gorilla (off our backs), not just a small monkey,” Fleury said. “Definitely feels good. It’s been rough, it’s been tough. Guys stuck with it, kept practicing hard, kept trying hard and tonight things went well. The PK was good, power play was good, we had a great second and third period. Fun to give the fans something to cheer about.”

Hagel gave the Blackhawks a 1-0 lead at 19:10 of the first period on a rebound of Kane’s shot.

Kane scored on a power play at 2:09 of the second period on a rebound of Ryan Carpenter‘s shot from the slot to make it 2-0.

Hagel scored his second of the game 27 seconds into the third when he skated out from near the goal line, turned and shot the puck along the ice past Murray to give Chicago a 3-0 lead.

“Finally, to say the least, I guess,” Hagel said. “It’s a good feeling, to finally get that one out of the way, but it doesn’t stop here. We have to build on that. After a win, hopefully we get a little bit of our confidence back and roll with it, see how this goes.”

Kane’s second goal made it 4-0 at 1:22 when he one-timed a cross-ice pass from Erik Gustafsson in the right face-off circle.

Formenton responded 19 seconds later with a wrist shot from the left circle at 1:41 to make it 4-1.

Kane completed his hat trick at 7:17 after Dominik Kubalik sent him in alone for the 5-1 final. The three goals moved Kane into third in Blackhawks history with 408, passing Steve Larmer (406). Bobby Hull leads with 604, and Stan Mikita is second (541).

Kane also had an assist and passed Denis Savard into third on Chicago’s all-time points list with 1,097. Mikita is first with 1,467, and Hull scored 1,153.

“It means a lot,” Kane said. “Original Six franchise, so many great players have come through here. I’ve been with the team 15 years. “When you’re around that long, you’re eventually going to pass some guys on certain things.”

“At the end of the day, as a group, we’ve just got to keep on striving to be better and keep our mindset, our goal and the way we want to play and the way we want to show up every single night and work,” Senators defenseman Thomas Chabot said. “We know that some nights it’s not going to go our way, but if we come back to our game plan and work the way we can, then we give ourselves a chance at least.”

NOTES: Kane finished with six shots on goal and was plus-3. … Kubalik had two assists and three shots on goal. … It was Murray’s first game since Oct. 23, when he sustained an upper-body injury during a 3-2 loss to the New York Rangers. … Smith said forward Austin Watson (ankle injury) and defenseman Michael Del Zotto (healthy scratch) will play Tuesday. It would be Watson’s season debut; he was injured in a preseason game Oct. 7.