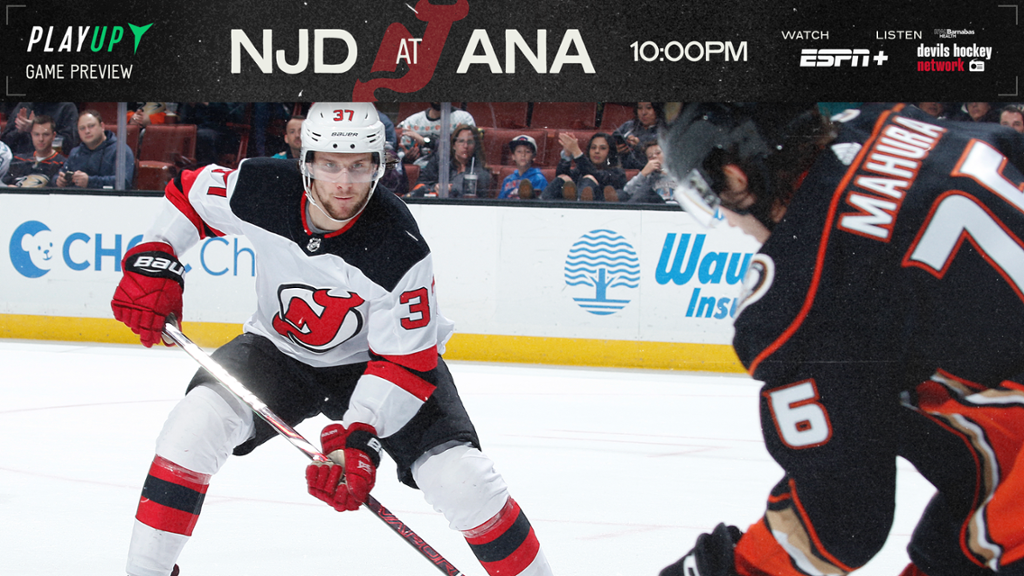 ESPN+ brings you exclusive TV coverage of the Devils and Ducks, as New Jersey embarks on a three-game California trip which begins Tuesday night at Anaheim’s Honda Center at 10 p.m. EST.

You can listen to the action on the Devils Hockey Network.

Read the game preview below and check back for lineup updates, videos and more a few hours before the game.

Keep up to date on the latest details from Devils practices and injury updates.

>> READ MORE IN THE INSIDE THE DEVILS BLOG

Forward Andreas Johnsson has four goals on the season, including three in the past two games. He is tied for the team lead with six points (4G-2A), matching the outputs of Pavel Zacha (4G-2A) and Dougie Hamilton (2G-4A).

The Devils traveled all three goaltenders on the trip with Mackenzie Blackwood (heel) still working his way back from an injury. Jonathan Bernier returned from a lower-body injury to record a win in Pittsburgh on Saturday night. He is 3-0 with a 2.32 goals-against average and .923 save percentage this year.

Anaheim is playing its second game of a four-game homestand against the Devils. The Ducks have earned points in their last five games (1-1-3) after a 4-2 triumph against Montreal on Sunday.

Anaheim’s offense is led by Troy Terry (5G-5A) and Kevin Shattenkirk (3G-7A), both of whom pace the club with 10 points. Former Devil Adam Henrique has four goals and nine points, while Jakob Silfverberg has eight points (1G-7A).

The offense is clicking, but the Ducks defense has allowed 3.40 goals per game, ranking 28th in the NHL.

Ducks captain Ryan Getzlaf became the club’s all-time leading scorer after picking up point No. 989 with an assist on Troy Terry’s game-winner against Montreal Sunday to pass Teemu Selanne. “It’s been a long time here in Anaheim and I’ve played with some great players,” Getzlaf told Matt Weller of AnaheimDucks.com. “I’m honored to be standing here now.”

Here’s the PC system requirements for Call of Duty: Vanguard