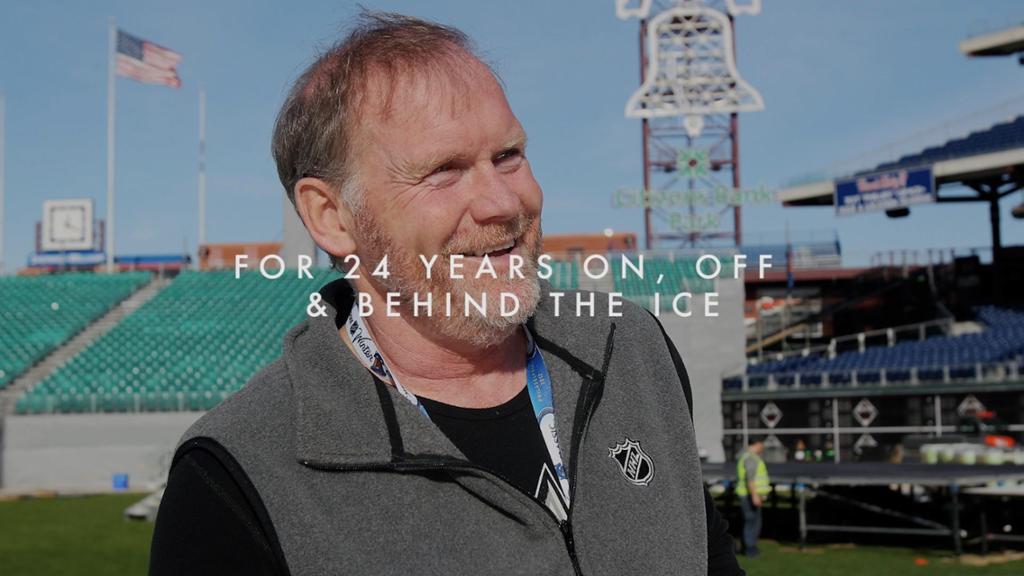 “I’ve graduated,” Craig said in a phone interview with NHL.com. “I have done enough to graduate from full-time employment. I think that’s pretty cool.”

Sunday marked Craig’s final day as the NHL’s vice president of facilities operations, which really always has been a corporate title for the 66-year-old who for nearly a quarter century has been best known as the League’s leading “Iceman.”

Craig started in his official role at the NHL in 1997, when he built a rink overtop an Olympic swimming pool in Tokyo for a pair of regular-season games between the Vancouver Canucks and the Mighty Ducks of Anaheim at Yoyogi Arena to start the 1997-98 season.

He led the NHL’s charge through its frigid first regular-season outdoor game, the 2003 Heritage Classic at Commonwealth Stadium in Edmonton on Nov. 22, 2003. He worked through a case of shingles to make sure the first Winter Classic, on Jan. 1, 2008 in Buffalo, went off through a blizzard.

“We didn’t have a rink system, it was totally makeshift, and had horrible conditions weather-wise and obviously lots of ice maintenance, but the fact that we were able to pull off that game was remarkable,” NHL Deputy Commissioner Bill Daly said, “and it was entirely due to Dan and his staff and their level of expertise. Looking back at it, if we hadn’t had Dan and his staff and their expertise and we weren’t able to execute that game the way we did the Winter Classic would have started and ended there.”

Craig was in charge of building rinks for NHL outdoor games at iconic venues such as Wrigley Field, Fenway Park, Dodger Stadium, The Cotton Bowl, Michigan Stadium, Notre Dame Stadium and, for his finale on the outdoor stage, on top of a golf course along the shores of Lake Tahoe.

“He was always available and always gave his candid, honest, unvarnished view of the challenges we were facing,” Daly said.

Craig’s expertise led to the NHL having two traveling outdoor rinks complete with refrigeration trucks, so outdoor games now can have the best possible playing surfaces even when the weather isn’t ideal.

For 24 years he was in charge of everything associated with NHL playing conditions, indoors and outdoors.

Craig leaves those duties to his son, Mike, and Derek King, each a senior manager in charge of facilities operations at the NHL.

But Craig won’t go away, he said. That’s why he uses the term graduating instead of retiring.

Part of that balancing act will be assisting the NHL on buildout for the 2022 Discover NHL Winter Classic between the St. Louis Blues and Minnesota Wild at Target Field in Minneapolis, not far from Craig’s home near the border of Wisconsin and Minnesota.

But most of the balancing act will be Craig and his wife, Lisa, spending time together at home and on the road, with regular visits to their grandchildren in British Columbia and Alberta.

“I have a 1955 Chevy pickup truck that I like to tinker on so I’m going to work on that,” Craig said. “I have a little motor home that we’re going to trade in and get a trailer and hook it up to the truck and whenever we decide to go, we go. It’s relaxing and it’s nice to not have to check emails every morning and then see something and have to go watch highlights closely to find out what really went on.

“It’s going to take an adjustment not to do that, but I don’t think it’s going to be that hard. Just an extra cup of coffee, that’s all.”

That Craig is ready to live in a more relaxed lifestyle is shocking to his son.

“I never really thought it would ever happen,” Mike Craig said. “This has been his livelihood, what he’s been doing since he was 16 years old. It’s been his absolute passion ever since he started so I didn’t really think the day would come that he would actually retire from the NHL.”

Craig said his passion for creating the best possible playing environment for the best players in the world was born out of watching skilled players fumble a puck they shouldn’t have fumbled.

“It used to frustrate the heck out of me to go watch a game and see something and go, ‘That didn’t need to happen, I could have fixed that,’ ” Craig said. “Watching the game and finding ways to do things better is what I loved. I loved the teaching part and challenging the other rink operators in the League to be better.”

Through his time at the NHL, and in the 10 years prior, when he was in charge of the rink at Rexall Place, the former home of the Edmonton Oilers, Craig became “the preeminent expert in all aspects of hockey rink outfitting around the world,” Daly said.

Daly said Craig has been underrated in his importance for what he has touched and impacted in the hockey world.

“I don’t know how this league was able to do what we were able to do for 75 or so years without Dan,” Daly said. “What he’s added, the layer that he has added, is absolutely critical to the on-ice product we see and the quality of the on-ice product we see every night. It’s so vital to how the game is played on a nightly basis, so he and the team he’s assembled are instrumental to our everyday business.”

It’s the team that takes over now for their former boss, with Craig having spent Sunday, his final day as a full-timer at the NHL, filing his last expense reports, writing a farewell email that was sent out to every NHL employee and shipping his laptop and phone to the New York office.