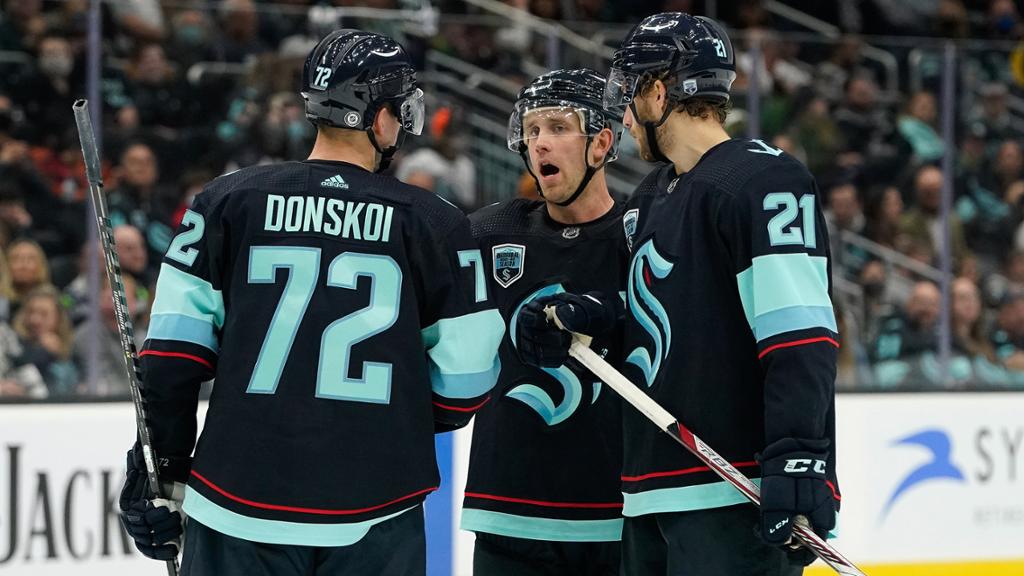 The Kraken’s 3-1 loss to the New York Rangers Sunday at Climate Pledge Arena was close.

It was the width-of-the-goal-post close. The goal post that Yanni Gourde hit with not much more than 90 seconds left in the game and Seattle down 2-1. The Kraken had pulled goalie Philipp Grubauer for the extra skater and Gourde nearly tied the game.

Video: Gourde hits the post in the waning moments vs Rangers

Playing a close game is nothing new to the Kraken. In their nine games to start the season, three have been decided by one goal while four more were one-goal games until a late empty-net score made the spread look like it was more than one.

“We don’t have to score a whole lot more,” Kraken coach Dave Hakstol said. “We just have to continue developing a complete 200-foot game and be real comfortable playing close hockey games because we’re going to be in a lot of them this year.”

Hakstol’s point is that he wants to play a tight, 200-foot game where they defend their defensive end and neutral zones. That comes with smart puck management and cycling it in the offensive zone to create chances and force the opponents to play defense.

Seattle does not want to play an open style of game where they get comfortable trading chances. While that style leads to a lot of goal scoring, it is difficult to win consistently that way. The Kraken style will lead to close games that are mostly decided by a play or two.

The encouraging thing is the Kraken are creating chances. Enough chances to score enough goals to edge out the opposition.

Sunday was the perfect example of how they can play.

Not only did the Kraken outshoot the Rangers 32-18 – including a 13-2 second period – but they had more unblocked shooting attempts (51-35) and more scoring chances (23-12). If not for a red-hot goalie in Igor Shesterkin, the Kraken would have won.

Having the ability to control the puck as they did Sunday is a positive sign that they can start to win more close games.

“If [chances] aren’t coming, that’s when you start worrying,” Jordan Eberle said after Seattle’s win against Montreal. “The biggest thing is you just want to continue to try and create those chances and be good on the other side of the puck.”

Seattle has been good on the defensive side of the puck during its four-game home stand in which all, but one game was close. It’s that style that will keep the Kraken in games, albeit close games.

The Rangers got timely scoring Sunday and the Kraken, thanks in large part to Shesterkin, could not. Shesterkin was the difference Sunday but the next night it can be a Grubauer save that wins a tight game, or a perfectly placed shot from Eberle, Gourde, or Jaden Schwartz.

“We don’t like the outcome. We’re not settled with the outcome,” Hakstol said post-game. “There’s not very many parts of this game that I don’t like… our effort was excellent. Our togetherness was great. We stayed with it, we just couldn’t make the play to get the game-winning goal.”

Seattle will need timely scoring in another tough test in Edmonton Monday night and chances are the game will be close.