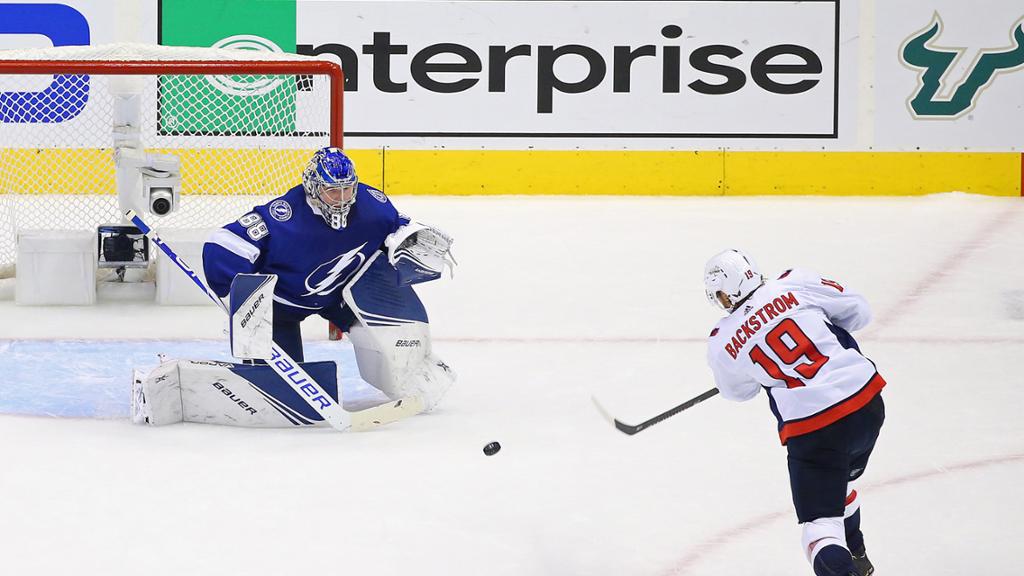 Welcome to the NHL On Tap. Three NHL.com writers will share what they are most looking forward to on the schedule each day. Today, their choices from the three games Monday.

Lightning starting to find their stride

Coming off consecutive Stanley Cup championships and significant changes in personnel, the Tampa Bay Lightning started the season slowly but have been picking it up of late. The Lightning have won their past two games, scoring five goals in each win, and are hoping to continue gaining traction when they host the Washington Capitals on Monday (7 p.m. ET; NHLN, TVAS, BSSUN, NBCSWA, NHL LIVE). Lightning forward Alex Killorn scored three points (two goals, one assist) in a 5-1 win against the Arizona Coyotes on Thursday and has scored seven points (four goals, three assists) in a four-game point streak. They face a big test Monday against the Capitals, who have yet to lose in regulation this season (5-0-3). Washington forward Alex Ovechkin has an eight-game point streak to start the season and is second in the NHL with 15 points (nine goals, six assists) behind Edmonton Oilers center Connor McDavid (16 points; seven goals, nine assists). Eight games equal the fewest it’s taken Ovechkin to get to 15 points in his career, matching 2009-10, and the longest season-opening point streak in Capitals history, matching his 2005-06 start and Alexander Semin in 2006-07. — Amalie Benjamin, staff writer

There’s no better time for the Chicago Blackhawks to awaken from their Nightmare on West Madison St. than the night after Halloween, when they host the Ottawa Senators (8 p.m. ET, SN, NBCSCH+, RDS, ESPN+, NHL LIVE). The Blackhawks are 0-7-2, the worst start in their history. But there are flickers of light in this gloomy tunnel: Chicago is in the top third of the NHL in both power play (25.0 percent; tied for ninth) and penalty kill (87.1 percent; sixth), and goalie Marc-Andre Fleury‘s 36-save effort in a 1-0 loss to the St. Louis Blues on Saturday was his best performance of the season. The Senators defeated the Dallas Star 4-1 on Saturday to begin a three-game road trip. Ottawa forward Drake Batherson leads skaters on both teams with eight points (four goals, four assists), having scored three goals with three assists his last two games. — Dave Stubbs, columnist

The Seattle Kraken visit the Oilers (9:30 p.m. ET; SN1, ROOT-NW, ESPN+, NHL LIVE) for the first regular-season meeting between these Pacific Division teams. The Kraken closed their first homestand with a 3-1 loss to the New York Rangers on Sunday. Defenseman Adam Larsson, selected by the Kraken in the NHL Expansion Draft, faces his former team for the first time. The Oilers are 6-1-0 after a 2-1 win at the Vancouver Canucks on Saturday. They have the top power play in the NHL (47.8 percent) and their penalty kill is tied for third with the Kraken (90.0 percent). McDavid leads the League with nine points on the power play and teammate Ryan Nugent-Hopkins is second with six. — Pete Jensen, senior fantasy editor

Nic Dowd will travel with the Capitals to Tampa Bay, but it’s unclear whether the forward will play against the Lightning. Nicklas Backstrom (hip) was expected to travel with the Capitals but is not eligible to come off long term injured reserve until Saturday. Steven Stamkos took a maintenance day on Sunday and Lightning coach Jon Cooper was not definitive about the forward’s availability Monday.

Senators forward Josh Norris has scored four goals and five points in a three-game goal/point streak. Defenseman Seth Jones leads the Blackhawks with seven points (all assists) and is seventh in the NHL averaging 26:13 in ice time per game.