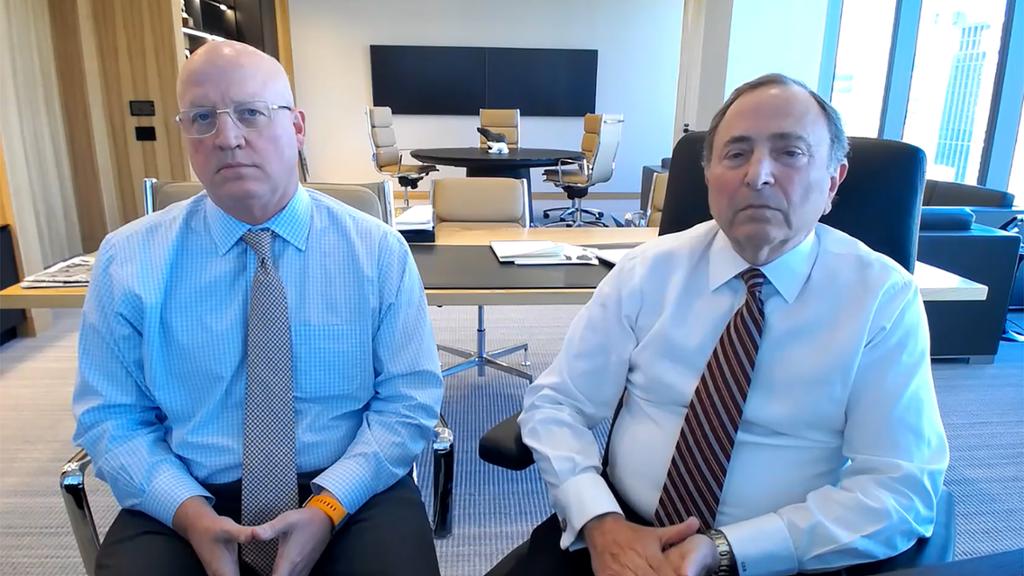 NHL Commissioner Gary Bettman called the Chicago Blackhawks sexual abuse investigation a “wake-up call to all clubs,” and he said the League will ask outside professionals to evaluate its efforts to address inappropriate conduct and engage other organizations to create a network to help everyone at all levels of hockey.

“If this horrible situation should serve any constructive purpose, it’s to demonstrate that this will not be tolerated, and if you have a problem in your organization, you better deal with it, and if you’re in a position of authority, you shouldn’t be overlooking it, because there will be a consequence to that,” Commissioner Bettman said in a video call with reporters Monday. “… If nothing else, this has to serve as a wake-up call to all clubs that you need to make sure you understand what your organization is doing, because you’re going to be held responsible.”

Kyle Beach said he was sexually assaulted by Brad Aldrich in 2010, when Beach was a forward prospect and Aldrich a video coach with the Blackhawks. The NHL fined the Blackhawks $2 million, general manager Stan Bowman stepped down and senior director of hockey administration Al MacIsaac was let go Tuesday upon the release of an independent investigative report by the law firm Jenner & Block. Florida Panthers coach Joel Quenneville, coach of the Blackhawks at the time of the alleged incident, resigned Thursday after meeting with Commissioner Bettman in New York.

Commissioner Bettman said his first task after reviewing the report late Monday into Tuesday was to deal with the Blackhawks.

“Whatever you concluded from what the witnesses said, it is clear that what happened was inappropriate, it was wrong on every level, and it was not handled correctly by the Blackhawks organization,” Commissioner Bettman said. “The fact that ownership was found to be unaware did not change my view that the club bore responsibility in this regard, and the club was fined as a result. People can [debate] and have debated the amount of the fine, but it was substantial by any measure and acknowledges that the organization failed to act appropriately. Also, the fine sends, as intended, a message to all clubs as to how I view their organizational responsibilities.”

Commissioner Bettman said the report did not draw conclusions as to credibility, and as a matter of due process, he needed to meet in person with Quenneville to hear his account of what happened and fairly decide the League’s response. Quenneville was behind the bench for the Panthers’ 4-1 win against the Boston Bruins on Wednesday.

“Should he have coached on Wednesday night?” Commissioner Bettman said. “I suppose people can differ on that point, and I understand that. But he had already coached 867 games since 2010, and I wanted to make sure that no one, including Coach Quenneville, could say that I had prejudged him. Again, people can disagree on this, but I was focused on the long term, not that one game. … I was more concerned with the substance than the look.”

Asked if he gave Quenneville a framework of potential discipline if he didn’t resign, Commissioner Bettman said: “Suffice it to say that whatever conversations I had with Joel or I suppose [owner Vincent Viola] had with Joel, Joel ultimately concluded that the most sensible course of action for him was to resign.”

Commissioner Bettman met Friday with Winnipeg Jets general manager Kevin Cheveldayoff, who was an assistant GM for the Blackhawks in 2010. The Commissioner determined Cheveldayoff would not face discipline even though Cheveldayoff attended a meeting that May 23 in which mental skills coach and team counselor Jim Gray informed management what Beach had told him about the alleged incident.

“The report did not suggest what exactly was said at that meeting,” Deputy Commissioner Bill Daly said. “It’s clear they talked about an inappropriate relationship, but the extent of that relationship and what was involved, according to several people at that meeting, was not raised. So Kevin wouldn’t have reason to know how significant an event we’re talking about happened.”

Commissioner Bettman said: “I do not believe he bore any responsibility for the club’s failure to act appropriately. There seems to be some confusion on the point of whether, despite his lack of power, position or seniority, he should have felt free to speak up. But because of his limited authority and circumstance, he left the meeting believing that this matter was going to be investigated by his bosses, and when Aldrich parted ways with the team [after the season], he thought that was what had happened.”

The Commissioner spoke with Beach on a video call Saturday.

“As I told Kyle on Saturday, I am sorry for what he has been through and [think] he has been courageous, especially this past week,” Commissioner Bettman said. “We discussed the path forward with him involved in efforts to confront abuse. We also offered to him and his family our resources for counseling.”

Commissioner Bettman said the NHL clearly has made considerable progress in these types of matters over the past decade, adding rookie education, training and counseling programs, inclusion committees, written policies on inappropriate conduct, and a reporting hotline. He said the League will start looking for the appropriate outside professionals to evaluate its programs in short order.

“We’re not going to do an internal investigation,” Commissioner Bettman said. “What we’re doing to do is bring in professionals to make sure that the resources that we have and are devoting to this are adequate and what we can do that may be better. … I think we’re probably right now in a better place than we’ve ever been. I just want to make sure it’s good enough and that we can’t do better.”

Commissioner Bettman said though the reporting hotline is intended for NHL personnel, the League thinks it is important that everyone in hockey have an outlet for help.

“There are many organizations that have expertise to deal with victims of abuse,” Commissioner Bettman said. “Accordingly, we intend to use our resources to engage in a worldwide effort to create a network of those organizations to be available to the hockey community, so that wherever you may be in the hockey ecosystem — minor league pro, major junior, college, amateur, youth, minor hockey, male or female — we think it’s important that everyone has an outlet for help. Obviously, the details of the network and how it will operate will have to be worked out. …

“We could not be more sorry for the trauma that Kyle has had to endure, and our goal is to do what is necessary to continue to move forward.”