‘Shame on you!’: Italian papers SLAM Juventus after their fourth defeat of the season to Verona on Saturday, as ‘disaster’ Massimiliano Allegri admits the Old Lady have to ‘accept reality’ as a ‘mid-table team’

By Sam Blitz For Mailonline

Italian papers have slammed Juventus for another dismal display following their weekend defeat to Verona – the Old Lady’s fourth loss of the campaign.

Massimilano Allegri’s side were well beaten on Saturday night, with Giovanni Simeone scoring twice in the first 14 minutes, leaving Weston McKennie to score what ended up being a mere consolation goal with 10 minutes left.

Juventus are now eighth in the Serie A table – a whopping 13 points behind leaders Napoli and AC Milan at the top – with Allegri being branded a ‘disaster’ by Gazzetta dello Sport on Sunday morning. 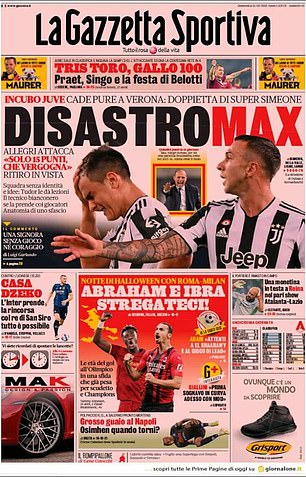 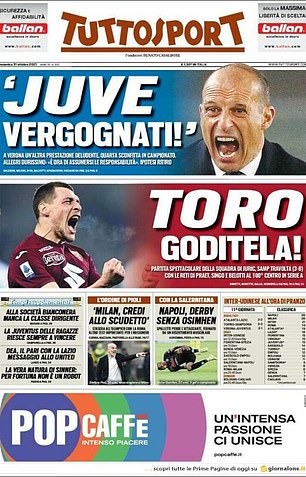 Allegri was branded a ‘disaster’ after the loss as one paper says: ‘Juve, shame on you’ (right)

The same paper branded the Old Lady’s season so far as a ‘nightmare’ and highlighted how the Italian giants were ‘taught a lesson’ by their former coach Igor Tudor, who is now the Verona boss.

Gazzetta branded the Juventus squad as ‘lacking in identity and ideas’ on their front page, while Allegri was understood to be angry with his players following the away defeat on Saturday.

Meanwhile, Tuttosport led with the headline: ‘Juve, shame on you’ and, like Gazzetta, pointed towards a possible training retreat for the Juventus players following their latest setback.

The Old Lady are now winless in their last three Serie A matches, with a draw at Inter Milan earlier this month quickly followed up by a shock home defeat to Sassuolo. Saturday’s loss to Verona has sealed off a terrible seven days for the Old Lady. 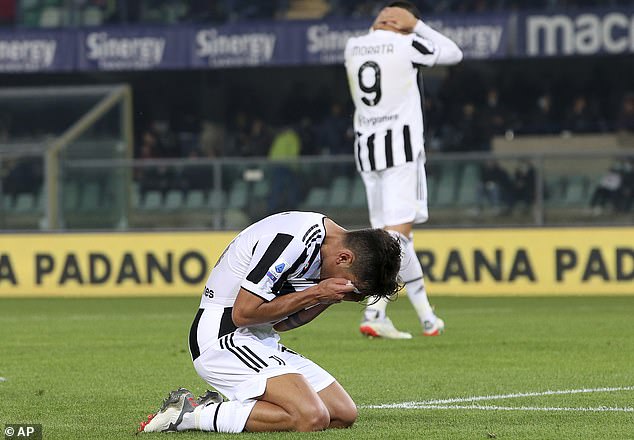 Corriere dello Sport described the loss as a ‘crisis in the dark’ for Juventus and also spoke about Allegri’s ‘fury’ towards his squad.

All three Italian papers highlighted the ‘shame’ Allegri spoke about after the match about his Juventus side having just 15 points from 11 games at the start of this season. 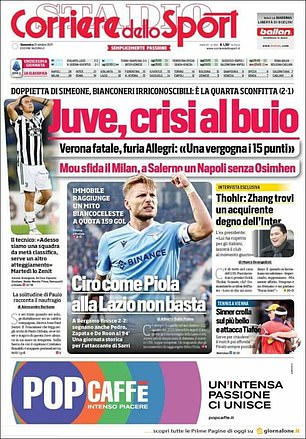 The Italian manager told Sky Sports Italia after the Verona loss: ‘To give explanations is difficult, we only need to shut up and work hard, it’s the only medicine.

‘In a few months time, we hope to be in a different position, so we need to lift our heads up again. For now, it’s shameful that we have only 15 points in the league.’

Allegri also hinted that his Juventus side were complacent before the Verona match and branded his side as a ‘mid-table team’ against a team who worked much harder than them.

The Juventus boss added: ‘We needed to put ourselves on their (Verona’s) level: run, go out to meet the opponent and afterwards the qualities come out. But we don’t beat mid-table teams just because we have a Juventus shirt on.’

He then told DAZN: ‘There was a confrontation (with his players after the game), but words don’t do anything. We just need to work.

‘We are in an awful situation in the table, in the sense that we only have 15 points, so we have to take responsibility. We have to accept the reality, now we are a mid-table team.’ 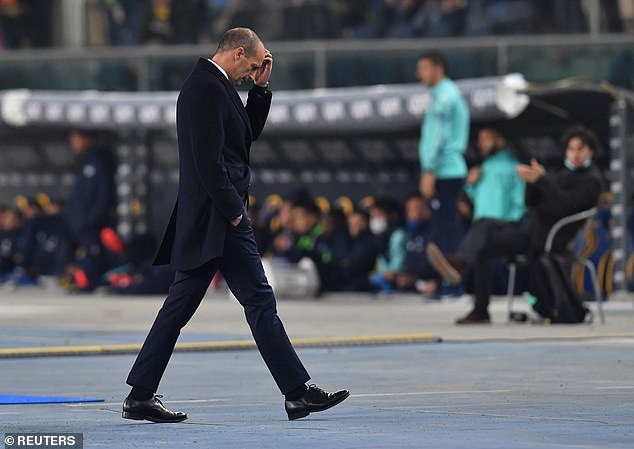