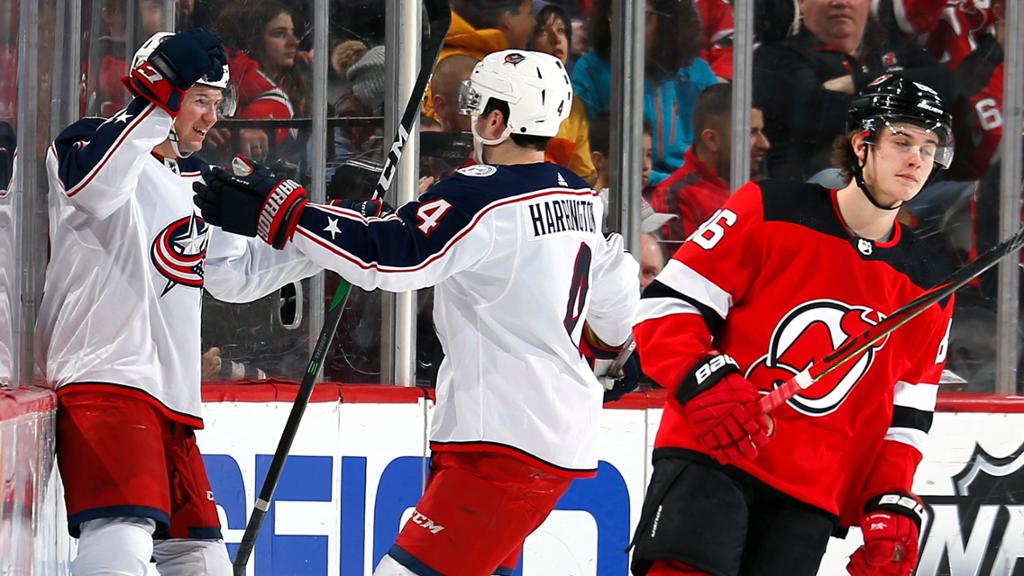 Friday night against the New York Rangers, the Blue Jackets started with some energy but didn’t bring the execution with them.

After an initial burst by Columbus, the Blue Jackets and Rangers ended up in a track meet, one that the Rangers won. Looking back at the tape, CBJ head coach Brad Larsen saw a passel of mistakes that his team made in turning over the puck and on the ensuing rush coverages, and New York took advantage on the way to a 4-0 victory.

The key today, then, in a Sunday evening matchup in New Jersey, is to bring the same early energy but clean up the errors.

“We had some energy, we were on our toes, we were assertive and then we fed into them,” Larsen said. “They’re just too good a team to do that. Jersey is the same. They’re a young team. They’re fast. They’re dangerous. They’ve added some guys. If you play high-risk hockey, you get stung, and that’s what happened.”

As the head coach said, he expects to see a similar game from the Devils as he did the Rangers, as both are young teams with talent that can skate and make you pay in the transition game. It’s all in all pretty similar to what the Blue Jackets are trying to do, and the Devils did it well in Saturday night’s 4-2 win at Pittsburgh.

“They’re fast, they go, they have skill and they’re gonna challenge you with their legs,” Larsen said after watching that contest last night. “They’re gonna back off our D. Every time they get an opportunity to get out of the D zone with pace, they’re gonna do it.

“Last night, within about 10-12 minutes, they had three breakaways against Pittsburgh, who is a team that plays well and is a structured team and they play hard and they play fast. You better be on your toes and skate with them.”

The Blue Jackets will have to do that with a blue line that remains banged up, with Adam Boqvist and Dean Kukan both out and Jake Bean set to be a game-time decision.

3 Keys to the Game

Tighten up defensively: The Blue Jackets let New York have too many transition chances in Friday’s loss, one reason Columbus fell behind and had to chase the game.

Bring energy: A 5 p.m. start in New Jersey can be a tough one to manufacture some jump for, but some how, some way, the Jackets have to figure it out.

Find some goals: Columbus has just six 5-on-5 goals in the last six games after four in the opener. At some point, the offense has to come back.

Columbus is coming off being shut out for the first time this year. … Oliver Bjorkstrand has a team high nine points (3-6-9), with three multipoint games in seven games. … Eleven different Blue Jackets have a goal in the first seven games, including first career NHL goals for Cole Sillinger and Gregory Hofmann. … Jakub Voracek has 13 assists in his last nine games at the Prudential Center. … Columbus had the youngest opening roster in the NHL at an average of 25.71 years old. … There are no former Blue Jackets on the New Jersey roster. … The teams did not play last year because they were in separate divisions; Columbus went 2-0-1 in the 2019-20 season vs. New Jersey. … The team’s last visit to the Prudential Center was a 4-3 shootout win for the Devils on Feb. 16, 2020. Andrew Peeke scored his first NHL goal in the contest. … Columbus is 16-3-1 in its last 20 against the Devils including 8-1-1 in its last 10 in Newark. … The Blue Jackets are 2-2-0 all-time on Halloween. … In addition to Peeke, Bjorkstrand also scored his first NHL goal against New Jersey, doing so March 19, 2016.

Roster Report: Bean missed practice Saturday and Larsen said he’s not sure yet if he’ll be able to play tonight; if he’s out, Bayreuther would likely slide into the lineup for his season debut. Korpisalo will make his third start of the year between the pipes.

This Day in CBJ History

Oct. 31, 2000: Serge Aubin scores twice in a 4-1 win over Los Angeles at Nationwide Arena, becoming the first CBJ player to score twice in one game. He also notched the first empty-net goal in team history in the victory.

Oct. 31, 2007: The Blue Jackets improve to 7-3-1 on the season with a 4-1 win at Los Angeles thanks to two goals from Jason Chimera and tallies from Gilbert Brule and Rick Nash.

What’s in a futuristic house? 3D printing, automation, among many others