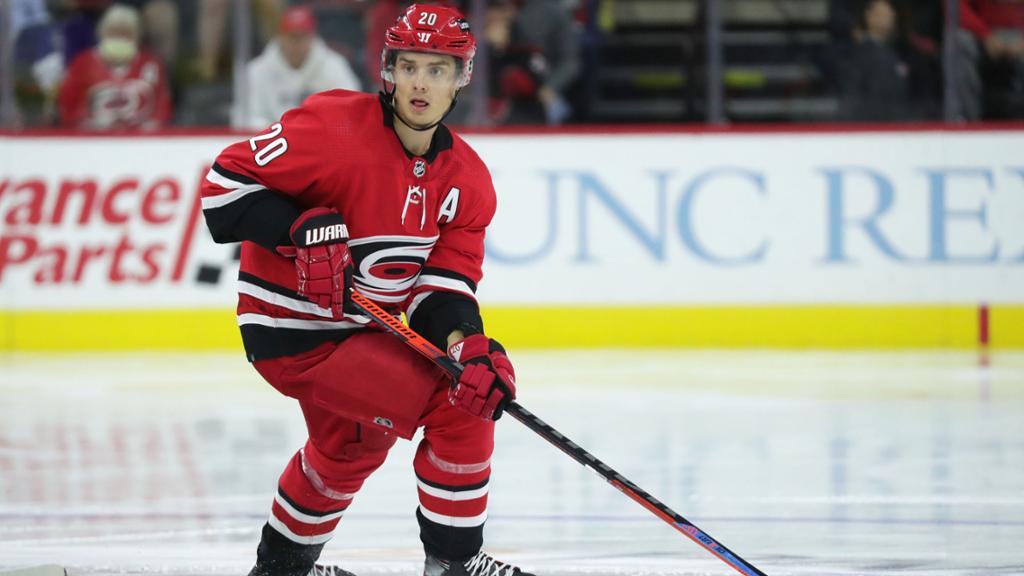 NHL.com’s Q&A feature called “Sitting Down With …” runs each Sunday. We talk to key figures in the game, gaining insight into their lives on and off the ice.

Sebastian Aho is one of the most important pieces to one of the best teams in the NHL. The center has opened the season with 10 points (five goals, five assists) in a seven-game point streak, each a Hurricanes victory (7-0-0) heading into Sunday, when they host the Arizona Coyotes at PNC Arena (1 p.m. ET; BSSO, BSAZ, ESPN+, NHL LIVE)

The 24-year-old, in his sixth NHL season, all with the Hurricanes, scored 57 points (24 goals, 33 assists) in 56 games last season and 11 points (six goals, five assists) in 11 Stanley Cup Playoff games; Carolina lost to the Tampa Bay Lightning in five games in the second round.

The Finland-born forward has regularly played on a line this season with countrymen Teuvo Teravainen and Jesperi Kotkaniemi, who left the Montreal Canadiens to join the Hurricanes after the 21-year-old signed a one-year offer sheet on Aug. 28.

NHL.com caught up with Aho recently to ask him about his path from Finland to the NHL, the touches of home in Raleigh, North Carolina, competing in the 2022 Beijing Olympics and reasons for hope for the Hurricanes, who have made the playoffs in each of the past three seasons but have not reached the Stanley Cup Final since they won the Cup in 2006.

What’s the biggest reason to be hopeful for the season in Carolina?

“I know we have a young core, but we’ve been through a lot as a group. Three playoff runs in three years. We just have to learn from those [experiences] and we have to remember how bad it feels when you lose a series. Then again, we’ve been winning against good teams and try to get confidence out of those ones. It’s just that we have a very solid core and a few new additions. I think we have a good team.”

You were one of three players (along with Florida Panthers center Aleksander Barkov and Colorado Avalanche forward Mikko Rantanen) to be the first submitted to be part of the Finland men’s hockey team at the 2022 Beijing Olympics. What would it mean to represent Finland at the Olympics?

“You know, that’s been probably my, outside of the NHL, my biggest dream as a hockey player. Obviously, it’s not ideal, no friends or family to share it with (because of planned restrictions related to COVID-19). But it’s still the Olympics. Putting a Finland jersey on would be awesome.”

Who’s a current Finland-born NHL player you love to watch?

Why not Rantanen or Dallas Stars defenseman Miro Heiskanen?

“Rantanen is very smart and just the way that they play as a line, Nathan MacKinnon and Gabriel Landeskog, it’s quite impressive. Heiskanen, [it is] skating ability, and his hockey IQ. It’s awesome to be buddies with them. We’ve played on plenty of the same teams and seeing them play in the NHL or even against them, it’s pretty cool.”

Who’s the next young Finland-born player you think will make a splash in the NHL?

“Hopefully Kotkaniemi will take the next step. I’m sure he has all the tools, but you know how it is, sometimes it still takes some time. He’s still young. But hopefully, he’ll have a big year.”

Does Raleigh start to feel like a Finnish town in Carolina with all the Finland-born player? What do you make of all of them with the Hurricanes, not just on the team but in the system?

“[It’s been] me and Teravainen since Day One for me, and it’s been great. Especially for the first year it was huge to have him there. You know he had a place, he had a car, he helped me. I had a ride for the rink. So it definitely helped. When you see a new Finn coming in you try to help them because I got help from Teravainen early in my career. I think it’s fun usually, actually always.
We get along, all the Finns. So definitely going to have a lot of dinners together and speak Finnish [away from] the rink. I think it’s just pretty cool.”

What’s a Finnish food you miss in Carolina?

“I guess anything my mom cooks.”

“It’s like a salmon soup. That probably sounds weird to you guys but it’s delicious when my mom’s cooking it. Probably my favorite food.”

When did playing in the NHL become a goal for you?

“I would say, whenever the national team started, like under-16, around there, I would say first you see you play with the best players in Finland and you say, ‘OK I’m really good once a year,’ and then you play other countries and you can play at that level and you kind of start realizing, ‘OK, there might be a chance.’ But you still don’t, like, think about it too much. Maybe when you’re closer to, you know, like 17 and I made it on an 18 team one year younger, that was the time I realized I had a pretty good shot here to maybe make it to the NHL one day and that became from a dream to a goal, ‘I want to make it there.’

“One night, when I was 17, my first real year with the pro team I just realized I can play against men and got some confidence out of it. At a [World Junior Championship] tournament, you are literally seeing the best players in the world at your age. Just like, little step by step, you go next level and you say, ‘I can play here.’ You gain more confidence. I never stressed too much about it, like I had to make it, but for sure, probably 16 or 17 years old when it became a goal to make it.”

Who in hockey were you nervous to meet for the first time?

“He gave me a handshake and I was sitting next to him so we [had] a good talk. Once you get to know him, he’s a great guy and I had a good time meeting great people that week.”