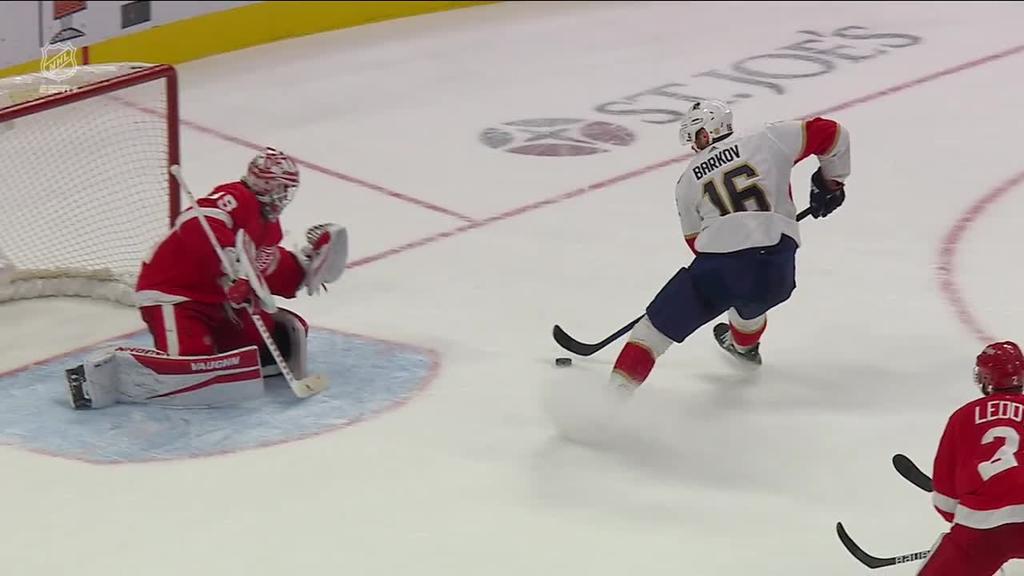 DETROIT — The Florida Panthers won their eighth straight to start the season in their first game without Joel Quenneville, 3-2 in overtime against the Detroit Red Wings at Little Caesars Arena on Friday.

Andrew Brunette coached the Panthers after Quenneville resigned Thursday. He stepped down after an independent investigation of how the Chicago Blackhawks, his former team, handled allegations by then-player Kyle Beach of sexual assault by then-video coach Brad Aldrich in 2010.

“To be honest, I’m happier for these guys than I am for myself,” said Brunette, who made his NHL coaching debut. “I’m so proud of how well they played after a really tough few days.”

Aleksander Barkov scored twice for Florida, including at 3:29 of overtime. Sergei Bobrovsky made 28 saves.

“At this point, every game is big, because we want to keep this streak going,” Bobrovsky said. “But we know this wasn’t easy for [Brunette], so it feels great to get him this win.”

Sam Gagner and Pius Suter scored, and Alex Nedeljkovic made 30 saves for Detroit (4-2-2). It was the second straight game the Red Wings forced overtime after trailing 2-0.

“That certainly builds our confidence, but I’m disappointed we didn’t get two points tonight,” Detroit coach Jeff Blashill said. “We got [behind] 2-0 and started playing better hockey.”

Eetu Luostarinen gave the Panthers a 1-0 lead at 8:43, tipping Brandon Montour‘s shot past Nedeljkovic for his second goal in as many games.

“He has really taken a step forward,” Brunette said. “He, [Mason Marchment] and [Sam Reinhart] were probably our best line tonight, both offensively and defensively.”

Florida increased its lead to 2-0 at 18:49 when Barkov forced a neutral-zone turnover before putting in the rebound of Anthony Duclair‘s shot.

Gagner made it 2-1 at 3:13 of the second period, deflecting in Troy Stecher‘s shot for his second goal of the season.

The Red Wings blocked 23 shots, including six in a 38-second stretch late in the third period.

“That was awesome,” Nedeljkovic said. “The guys were sacrificing their bodies, and the crowd was really getting into it. The fans fed off it and we fed off the fans.”

Moments later, Suter tied the game with 2:41 left in regulation, scoring his first goal with the Red Wings.

“They have become a really tough team to play,” Brunette said. “The way they are going, with the kids they have in their system, they could really become a problem for us.”

Barkov finished off a 2-on-1 break with Jonathan Huberdeau in overtime to make the Panthers the first team to win their first eight games since the Montreal Canadiens won their first nine start the 2015-16 season.

“[Barkov] got a huge face-off win in the [defensive] zone, I got the puck back to him and then I let the big guys get to work,” Panthers defenseman MacKenzie Weegar said. “I was just a decoy, watching an incredible pass from [Huberdeau] to [Barkov].”

Video: Barkov wins it in OT, lifts Panthers to 8-0 start