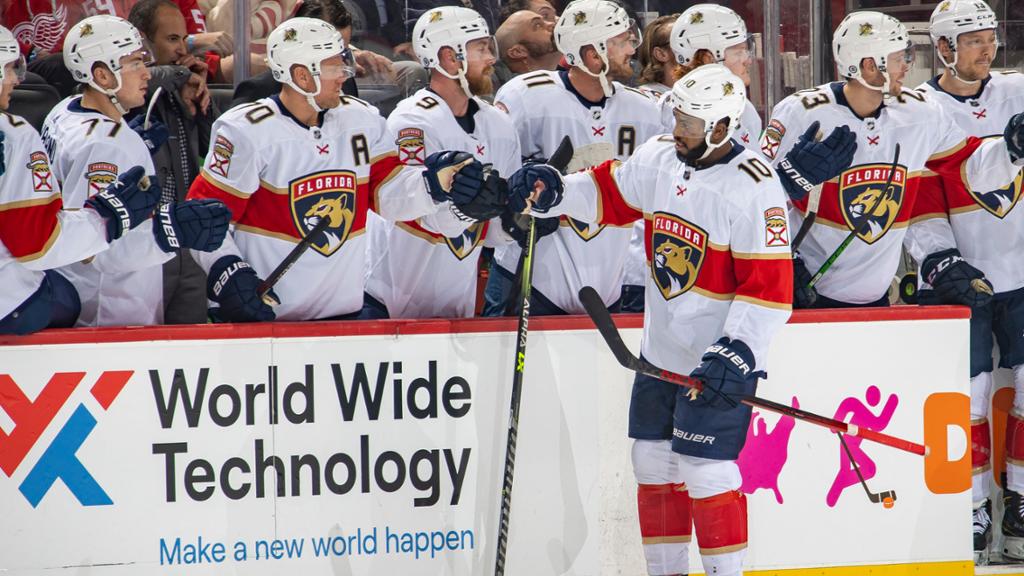 Panthers’ winning streak on the line in Boston

The Florida Panthers (8-0-0) will try to become the fourth team in NHL history to start a season with at least nine straight wins when they visit the Boston Bruins (7 p.m. ET; TVAS, NESN, BSFL, ESPN+, NHL LIVE). The 2015-16 Montreal Canadiens were the most recent team to start 9-0-0. The 2006-07 Buffalo Sabres and 1993-94 Toronto Maple Leafs share the NHL record for longest winning streak to open the season at 10 games. Florida defeated the Detroit Red Wings 3-2 in overtime on Friday. Center Aleksander Barkov scored the overtime goal. The Panthers’ streak is alive despite that former coach, Joel Quenneville, resigned Wednesday because of his role in how the Chicago Blackhawks, his former team, handled allegations of sexual assault by then-player Kyle Beach against then-video coach Brad Aldrich in 2010. Andrew Brunette, who was an assistant under Quenneville, is coaching the Panthers now and they didn’t miss a beat Friday. The Bruins lost to the Panthers, 4-1 in Florida on Wednesday. Boston will try to end a two-game losing streak. It also lost 3-0 at the Carolina Hurricanes on Thursday. — Dan Rosen, senior writer

When two of the hottest teams in the NHL meet, something has got to give. The Calgary Flames return home to host the Philadelphia Flyers (10 p.m. ET; SN360, SN1, CITY, TVAS, NBCSP+, ESPN+, NHL LIVE) after five consecutive wins against Eastern Conference teams and becoming the third team in NHL history to sweep a road trip of at least five games without trailing. They joined the Blackhawks (5-0-0) from Jan. 31-Feb. 8, 1996 and St. Louis Blues (5-0-0) from Feb. 6-15, 2017 in that accomplishment. Philadelphia (4-1-1) is looking to sweep a three-game Western Canada road trip after defeating the Vancouver Canucks 2-1 Thursday and the Edmonton Oilers 5-3 Wednesday. Forward Claude Giroux has scored at least one point in each of Philadelphia’s six games. Flames forward Johnny Gaudreau has scored 10 points (one goal, nine assists) in a six-game point streak. — William Douglas, staff writer

The Winnipeg Jets (4-2-1) will bid for a third straight win in California when they visit the San Jose Sharks (4-3-0) on Saturday (7 p.m. ET; NHLN, SN360, CITY, NBCSCA, ESPN+, NHL LIVE). Winnipeg has won four in a row and is unbeaten in regulation in five (4-0-1) after a 3-2 win at the Los Angeles Kings on Thursday and a 4-3 victory at the Anaheim Ducks on Tuesday. The Jets have compiled their streak without two of their top forwards. Captain Blake Wheeler has resumed practicing and is doubtful against the Sharks after missing five games while in NHL COVID-19 protocol. Center Mark Scheifele has also resumed skating but will not play against the Sharks, having missed the past four games in protocol. The Sharks, who have lost three in a row, defeated the Jets 4-3 in San Jose on Oct. 16. — Tim Campbell, staff writer

Goalie Ilya Sorokin makes his seventh straoght start to begin the season for the Islanders, who will play their first game in six days. Defenseman Roman Josi has scored seven points (two goals, five assists) in a three-game point streak for the Predators, who seek their third consecutive win.

Phillip Danault is expected to play against his former team for the first time since the forward signed a six-year contract with the Kings on July 28. It would be his 400th game in the NHL. The Canadiens have won two of their past three games after losing their first five to begin the season, including 4-0 against the Sharks on Thursday when goalie Jake Allen made 45 saves.

Spencer Knight is expected to start in goal for the Panthers after Sergei Bobrovsky improved to 6-0-0 on the season, when he made 28 saves in a win at the Detroit Red Wings on Friday. Knight is 2-0-0 with a 2.01 goals-against average and .923 save percentage. The Bruins are 2-0-0 at home, where they have not allowed a power-play goal in eight opportunities this season.

The Maple Leafs will start a five-game homestand and try to build on their come-from-behind 3-2 overtime win at the Chicago Blackhawks on Wednesday that ended a 0-3-1 skid. Red Wings defenseman Moritz Seider has assists in four straight games (four assists) and leads NHL rookies with seven assists in eight games this season.

Sidney Crosby (wrist) and Jeff Carter (COVID-19 protocol) will return for the Penguins, who have lost two in a row. Crosby will make his season debut after rehabbing from wrist surgery he had Sept. 8. The Devils will play their first road game after starting the season 3-2-0 at home, including a 5-3 loss to the Calgary Flames on Tuesday.

The Blues will try to get back in the win column after losing 4-3 to the Colorado Avalanche on Thursday to end a season-opening five-game winning streak. Blues forward Vladimir Tarasenko has scored eight points (four goals, four assists) in a five-game point streak. The Blackhawks are 0-6-2 after losing 6-3 at the Carolina Hurricanes on Friday.

The Wild will be without leading scorer Mats Zuccarello (seven points; three goals, four assists) for the second consecutive game. He was placed in COVID-19 protocol before their 4-1 loss to the Seattle Kraken on Thursday. Avalanche forward Nathan MacKinnon has scored seven points (one goal, six assists) in a five-game point streak.

Forward Sean Couturier leads Philadelphia in scoring with nine points (three goals, six assists) and the Flyers 4-1-1 start is their best since Alain Vigneault become coach in 2019. Calgary forward Andrew Mangiapane has scored six goals in his past five games.

Here are all of the abilities for Chamber, VALORANT’s new weapon-savvy agent