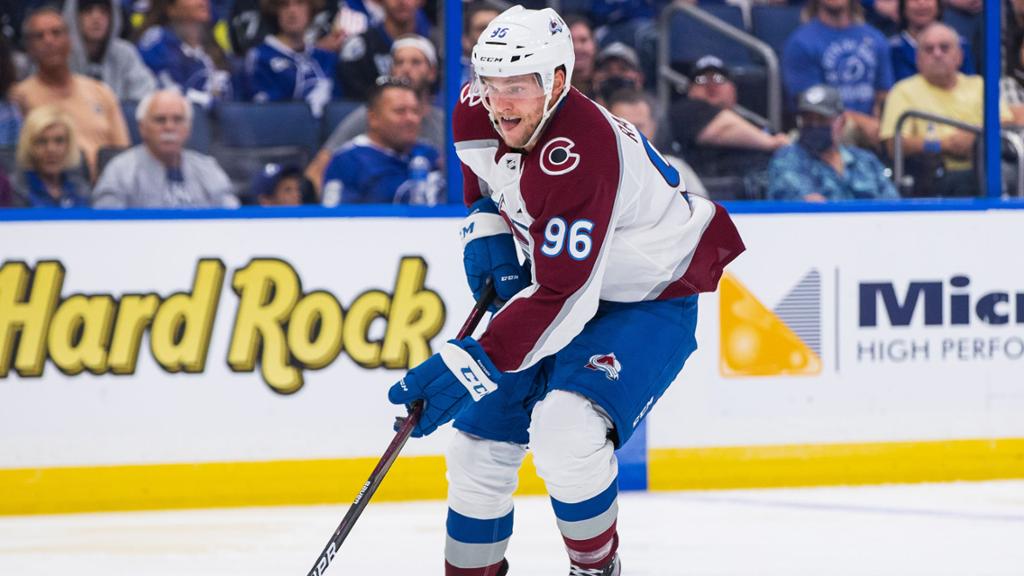 Welcome to the NHL Buzz. Throughout the 2021-22 season, NHL.com will have you covered with the latest news

Mikko Rantanen is day to day for the Avalanche and is not expected to play against the Minnesota Wild on Saturday (9 p.m. ET; ALT, BSN+, BSWI+, ESPN+, NHL LIVE).

The forward sustained a lower-body injury in a 3-1 loss to the Vegas Golden Knights on Tuesday, left practice early Thursday, and did not play in a 4-3 win against the St. Louis Blues that night.

“We’ll see what tomorrow brings. I think he’s day to day,” Avalanche coach Jared Bednar said. “I don’t think it’s a serious injury. … he tightened up in the morning skate (Thursday). Basically, it was a surprise to me he wasn’t going to play because I was given an indication that he was okay. Sometimes you get on the ice and you just feel different.”

Defenseman Samuel Girard, who missed the past two games with an upper-body injury, will play Saturday.

“As long as he comes out of that practice (Saturday) okay, then he’ll be good to go,” Bednar said Friday. “If he has a setback then he wouldn’t play tomorrow. I think there’s a very good chance he’s going to play tomorrow, but if he tightens up tomorrow morning and he gets stiff and can’t go, he can’t go.”

Petr Mrazek will return to the lineup for the Maple Leafs against the Detroit Red Wings (7 p.m. ET; CBC, BSDET, ESPN+, NHL LIVE).

The goalie has missed six games because of a groin injury he sustained in his season debut, a 3-2 loss to the Ottawa Senators on Oct. 14.

“It was not a good feeling at the end of the second period in that game in Ottawa to see Petr go down so obviously the intention was when you build it out, at the beginning your plan is always great but then different things happen, injuries,” Maple Leafs general manager Kyle Dubas said Friday. “Jack Campbell has played very well and now it’ll be great to get Petr in and rolling and have the two of them form the tandem that we established that we wanted to have starting tomorrow night.”

Campbell was 2-2-1 in five starts while Mrazek was injured; Michael Hutchinson lost his only start.

Brandon Saad was removed from NHL COVID-19 protocol and practiced with the Blues on Saturday.

The forward, who has missed the past three games, will not be in the lineup against the Chicago Blackhawks (8 p.m. ET; BSMW, NBCSCH, ESPN+, NHL LIVE). He has scored two points (one goal, one assist) in three games this season.

“He’s cleared, and he’ll skate for the next few days,” coach Craig Berube told the Blues website. “Hopefully he’ll be back [against the Los Angeles Kings on Wednesday]. We’ve missed him, we’re looking forward to getting him back in the lineup.”

The Blues are also without center Ryan O’Reilly, who tested positive for COVID-19 on Tuesday. He did not play in a 4-3 loss to the Colorado Avalanche on Thursday and will miss at least the next three games.