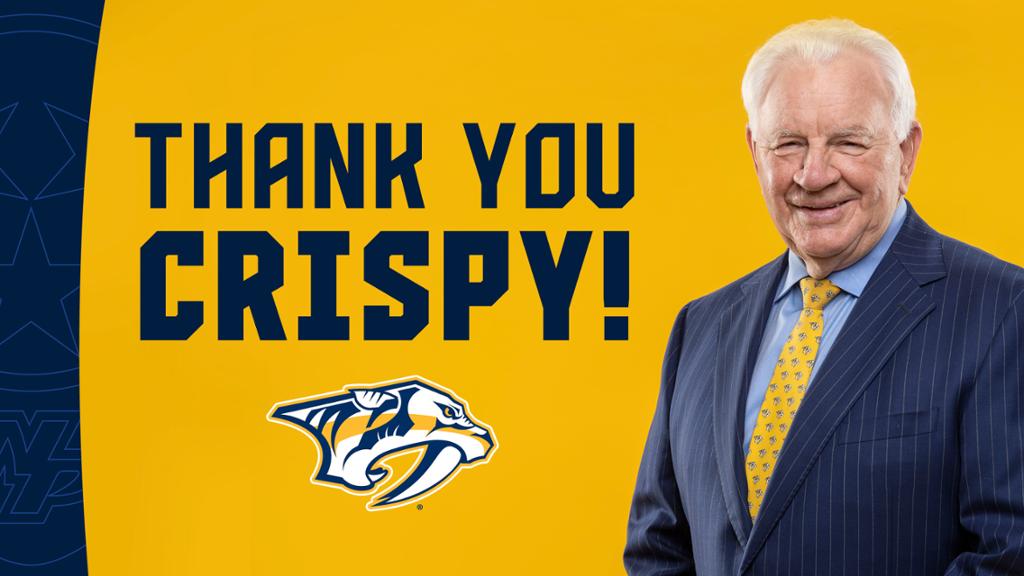 Nashville, Tenn. (October 30, 2021) – Bally Sports South studio analyst Terry Crisp announced on Saturday, October 30, that this will be his final season covering the Nashville Predators for the network.

Crisp and his wife Sheila announced his retirement during today’s (October 30) New York Islanders vs. Predators game on Bally Sports South, as part of a special matinee edition of Saturday Night in Smashville.

“It was not a hard decision for us because it has been such a great trip,” said Crisp. “We’ve had so much in our hockey life and coming to Nashville was one of the best decisions we ever made. We were able to start with a new franchise and watch it grow, all while having a lot of fun in a wonderful city. Having one last season to enjoy with this young group is as good a way to finish as Sheila and I could ask for.”

Crisp covered the Predators for the last 23 seasons, starting with the team’s expansion season in 1998. He served as in-game analyst for 16 seasons with former TV play-by-play announcer Pete Weber before shifting to Predators LIVE pre- and postgame shows as a studio analyst for the last seven seasons with host Lyndsay Rowley. He was also a member of the Predators’ Emmy-winning broadcasts in 2003, 2008 and 2010.

“Terry Crisp is one of the most beloved and iconic figures in professional hockey,” said Jeff Genthner, Senior Vice President and General Manager of Bally Sports South. “He’s a three-time Stanley Cup champion and his big personality and connection with fans is like no other. We all have been blessed to have Crispy on our telecasts since the team’s inaugural season.”

Crisp played 10 seasons in the NHL with the Boston Bruins, St. Louis Blues, New York Islanders and Philadelphia Flyers from 1965-77, posting 201 points (67g-134a) in 536 games. He went on to coach for 11 seasons with Philadelphia, Calgary and Tampa Bay, serving behind the bench for the Lightning’s first 391 games, the record for most games coached by an expansion franchise’s first coach until Barry Trotz, then with the Nashville Predators, broke the mark in 2003. Crisp is one of 14 people to have won the Stanley Cup as both a player and head coach – he won two as a player with the Flyers in 1974 and 1975 and one as head coach of the Flames in 1989. He also served as the assistant coach of the silver medal-earning Canadian team at the 1992 Winter Olympics in Albertville, France.

“There are few individuals who have been more important to more hockey markets and expansion teams than Terry Crisp,” Predators President and CEO Sean Henry said. “Terry and his wife, Sheila, introduced the NHL through the Predators’ launch in a way that welcomed everyone into what has now become the most passionate fan base in sports. SMASHVILLE would not have become what it has without their generous spirit and hospitable natures. Terry’s role after he leaves the broadcast desk will continue to work to grow and engage our fanbase and incredible partners for years to come.”

A testament to the impact he had on the Tennessee hockey community, Crisp was inducted into the Tennessee Sports Hall of Fame in 2020. He is also a member of the Bobby Orr Hall of Fame, located in his hometown of Parry Sound, Ont.

Crisp will be celebrated throughout the 2021-22 season, starting Tuesday, Nov. 2 when he travels with the team to Calgary, one of his former coaching stops, for the game between the Predators and Flames; coverage will begin at 7:30 p.m. CT on Bally Sports South. Crisp will also be formally honored by the Predators on Sunday, April 17, when the team hosts the St. Louis Blues at Bridgestone Arena with coverage starting at 4:30 p.m. CT on Bally Sports South.

The Nashville Predators became the National Hockey League’s 27th team on May 4, 1998 and have evolved from a young expansion franchise into a staple of the Middle Tennessee community in the years since. The team strives each season to reach its One Goal: becoming a Stanley Cup Champion hockey team while making Bridgestone Arena the number one sports and entertainment venue in the United States. In 2020 alone, with One Goal in mind, the Nashville Predators organization drove approximately $5.5 million in life-changing funds to assist a wide variety of relief efforts, non-profit organizations and individuals in need. On the ice, the team has seen historic success in recent seasons, qualifying for the Stanley Cup Playoffs seven straight times, a run headlined by a trip to the Stanley Cup Final in 2017, winning the Presidents’ Trophy in 2017-18, and earning a second consecutive Central Division title in 2018-19. For more information on the Nashville Predators, game schedule and ticket availability, please go to NashvillePredators.com.

Intelligence chief: People will be informed about cyber-attack